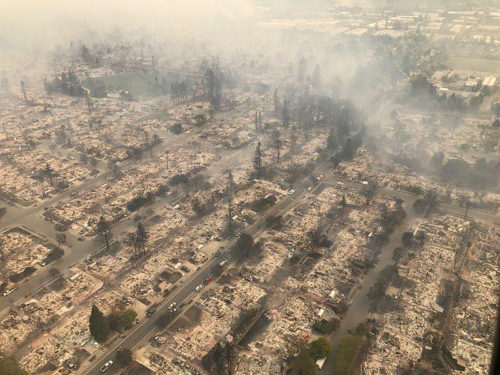 [Episcopal News Service] The Rev. Karen King woke up to flames in the middle of the night Oct. 8 in her Oakmont Village home east of Santa Rosa, California.

“We could see the flames jumping on the top of the ridges of Annadel [State Park] that separate us from Kenwood,” said King, who is the interim priest at St. Patrick’s Episcopal Church in Kenwood. “We could see the fires all around us. And we left, thinking we could go home in the morning, and we’ve never been home.”

She and her spouse, Judith Kesot, went to the Montgomery Village Shopping Center parking lot along with many other people. The shopping center is on the other side of Annadel State Park and closer to Santa Rosa proper.

The nearby Presbyterian Church of the Roses opened its doors to everyone in the shopping center parking lot and to anybody who passed on the street, King said. “It was just amazing what they did,” she said.

As many as 21 people are reported dead as of Oct. 11 in the inferno that began sweeping through Northern California, primarily the state’s wine country, the night of Oct. 8. Authorities say they are bracing for more deaths, in part because hundreds of people are listed as missing, including 560 in Sonoma County alone. The National Interagency Fire Center in Boise, Idaho, says in its latest report that 1,189 structures burned as of 5:30 a.m. MDT Oct. 11.

There are 12 large uncontained fires, according to the center, including two named fires and four “complexes” of fires. Two of the fire complexes are exhibiting “extreme” or “moderate” fire behavior that is threatening residences and other structures. None of the fires have been contained, and they comprise 120,797 acres. That is an increase in acreage of almost 24,000. Nearly 3,480 people are battling the blazes.

King spoke by phone with Episcopal News Service from the rectory of the Church of the Incarnation in downtown Santa Rosa, just outside of the city’s northern evacuation zone. The Rev. Jim Richardson, Incarnation’s priest-in-charge, offered King and Kesot a place in the church’s rectory.

King later told ENS that they had heard that no homes burned in Oakmont, but they still do not know what has happened to the church in Kenwood. “Yesterday morning – it seems so long ago – I was told that a tree had fallen on the office at St. Patrick,” she said. 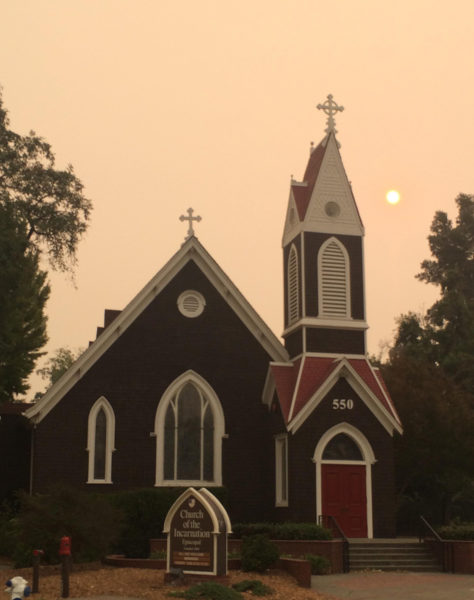 The Oct. 10 morning sun tries to burn through a smoky haze above Santa Rosa, California, and the Episcopal Church of the Incarnation, caused by a swarm of fast-moving wildfires that are devastating huge swaths of northern California. Photo: Lori Korleski Richardson

Meanwhile, she said, she is trying to keep track of some 90-year-old parishioners “until their families can get here to pick them up.”

Diocese of Northern California Bishop Barry Beisner said Oct. 9 that “these tragic fires have greatly impacted some of our congregations.”

“Some of our people have experienced great loss.”

Episcopal Relief & Development staff members have been in touch with diocesan partners in the region and are standing by to help.

Richardson said on Oct. 10 that he knows of parishioners who have lost their homes. “They are safe but their homes are not,” he said.

None of those folks are at Incarnation, having gone to stay with family or friends, but the rectory was now a temporary home to “three people, two dogs and one cat.” Four or five people were in the church building. Richardson offered the property to Sonoma County as an official evacuation center but was told that the country had run out of cots and other supplies. St. Stephen’s in Sebastopol in the southern part of the county is listed as an official shelter.

Incarnation’s church and rectory are on the north side of downtown Santa Rosa, just blocks from the larger of the city’s two evacuation zones, he said.

Most parishioners and neighbors who had other places to go have left. “Most people want to get the heck further away from here.” Others “really want to stay close by, hoping they can get back to their houses,” Richardson added.

On the morning of Oct. 10, Richardson said Santa Rosa was chaotic “but it’s not as bad as yesterday” when people were fleeing the fires’ advance. Thousands of people were forced to evacuate, including patients from several hospitals and residents of Spring Lake Village, an Episcopal retirement community.

Along with Incarnation in Santa Rosa, Emmanuel in Grass Valley and St. Stephen’s in Sebastopol opened their doors as shelters for some of the displaced. St. Dorothy’s Episcopal Camp and Retreat, known by generations of Episcopalians as St. Dorothy’s Rest, said late on Oct. 10 that it could shelter people as long as the Camp Meeker, California, facility in the hills above Bodega Bay had power. However, staff members said in a Facebook post that they anticipated losing power in the next 24 hours.

Meanwhile beyond the eastern side of the fires, the Bishop’s Ranch in Healdsburg reported late on Oct. 10 that the Diocese of California conference and retreat center was safe but smoky.

Richardson said that the fires, whose cause is still unknown, came completely by surprise and were driven by strong winds. Richardson, who lives in Sacramento with his wife Lori Korleski Richardson, the interim communications director for the Diocese of Northern California, was headed home after services in Santa Rosa on Oct. 8 when he noticed the winds kicking up. 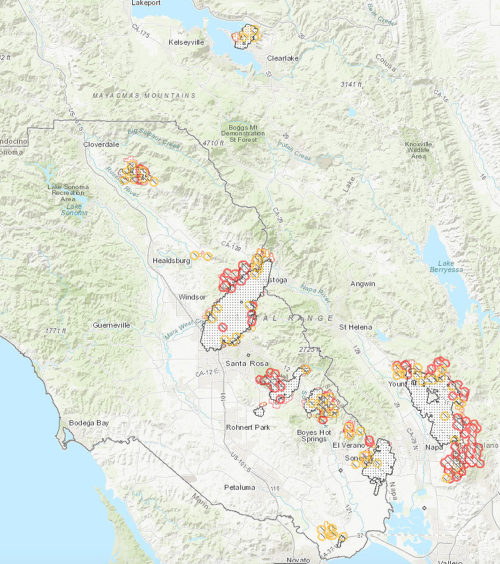 This map shows the swarms of fires burning in northern California, most of them within the borders of Sonoma County. Image: County of Sonoma

“Then they really started roaring up to 75 miles per hour,” coming off the Nevada and Utah deserts to the east. Richardson, who used to be a reporter in Southern California, recognized them as similar to the Santa Ana winds that often turn October and November into fire season in that part of the state.

But, “I have lived [in Northern California] off and on my whole life and I don’t ever remember Santa Ana winds,” he said.

Richardson got a telephone call at 5 a.m. Oct. 9 from Incarnation Parish Administrator Alison Cole telling him, “Santa Rosa’s on fire.”

After meeting with diocesan officials later that morning, Richardson set off for Santa Rosa, a trip that normally takes about two hours. He did not get there until afternoon because many roads were closed as the fires spread.

A curfew imposed on Santa Rosa the night of Oct. 9 made the city feel very quiet, he said. After he got done talking with ENS the morning of Oct. 10, Richardson planned to track down some parishioners who were evacuated from a local hospital.

And, “we will see again if we are needed to be shelter tonight,” he added.

Editor’s note: This story was updated Oct. 11 at 3:40 p.m. EDT to update fire statistics and to add news about St. Dorothy’s Rest and the Bishop’s Ranch.