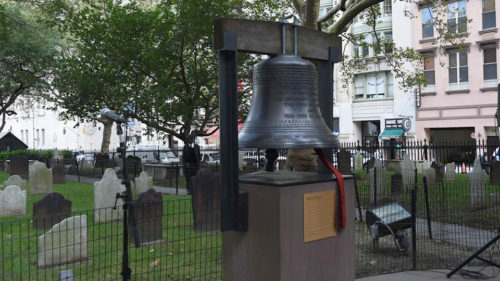 St. Paul’s Chapel of Trinity Wall Street in New York City rang the Bell of Hope at noon, joining churches around the country in solidarity with the Diocese of Nevada and remembering those killed in Las Vegas over the weekend. Photo: Trinity Wall Street, via Facebook

[Episcopal News Service] Episcopal churches across the country tolled bells simultaneously Oct. 3 in solidarity with the Diocese of Nevada and in memory of the victims of the mass shooting over the weekend in Las Vegas, which left 60 people dead, including the gunman.

Bishops United Against Gun Violence, a group of more than 70 Episcopal bishops, issued the call for a nationwide bell tolling. Responding to Nevada Bishop Dan Edwards’ suggestion, the bells rang at 9 a.m. PT (10 a.m. MT, 11 a.m. CT and noon ET). Bishops United recommended tolling bells 60 times — for the 59 victims, as of the most recent count, and for the gunman who killed himself after firing down from a hotel room on an outdoor country music concert.

Churches from New York to California pledged to join in tolling their bells.

Come at noon/St Paul’s Chapel as we ring the Bell of Hope in solidarity with the Diocese of Nevada, remembering those killed in Las Vegas. pic.twitter.com/ES6ojDGwdx

A bell rings for each of the #LasVegasShooting #victims & a #candle is lit in their memory. Our service of lament begins. #Baltimore @EPFNational @iamepiscopalian @TheCrossLobby #episcopal @MomsDemand pic.twitter.com/7l0sjDuHhf

An interfaith rally was held at Washington National Cathedral to remember the victims “while also urging a national conversation to end gun violence.” The cathedral offered a live video stream of that event on its Facebook page.

Diocese of Washington Bishop Mariann Budde said the cathedral’s Bourdon bell typically only is sounded at funerals and at national times of mourning.

“We gather in grief over the senseless bloodshed at a shooting last Sunday night in Las Vegas, and we gather with urgency,” Budde said outside the cathedral before the bell tolled 60 times. “We are people who minister to people affected by gun violence year after year. We are exhausted by the fact that this probing conversation on the issue of gun violence continues to elude us. This failure is a cause for repentance and shame.”

The shooting is the deadliest in modern U.S. history. Authorities say 64-year-old Stephen Paddock fired down on the crowd from two rooms on the 32nd floor of nearby Mandalay Bay Resort and Casino, sending concertgoers fleeing. In addition to those killed, hundreds were injured. Paddock was found dead along with 23 rifles in his hotel suite, and 19 more firearms were found in his home.

Since the nighttime attack Oct. 1, Episcopal leaders have responded by offering prayers, support and calls to action.

“We are praying for the families and friends of those who have died and for the many people who have been wounded,” Anglican Communion’s primates said in a statement released from Canterbury, England, where they, including Episcopal Church Presiding Bishop Michael Curry, are meeting.

The Rev. Gay Clark Jennings, president of the Episcopal Church’s House of Deputies, issued a statement saying “my heart broke once again” after learning of the latest mass shooting, and she cited a General Convention resolution supporting legislation to prevent more massacres.

“May we have the strength to put our words into actions so that the lawmakers who represent us in Washington, D.C., and in state capitols across the land will enact sensible legislation that can prevent guns from falling into the hands of people whose hearts are torn with hatred, violence, and despair,” she said.

Bishops United Against Gun Violence also issued a statement, saying Christians must act and “engage in the debates that shape how Americans live and die, especially when they die due to violence or neglect.”

In Las Vegas, Episcopal clergy members are helping to provide pastoral care for victims and emergency personnel, and the Diocese of Nevada will hold a memorial worship service at 7 p.m. Oct. 3 at Christ Church, the Episcopal church closest to the Las Vegas strip where the shooting happened.

Budde, who is a member of Bishops United, echoed the group’s written statement, saying it is “entirely reasonable” to seek legislative reform in the immediate wake of yet another mass shooting.

“Thoughts and prayers, while important, are insufficient,” she said. “In our tradition, the scriptures tell us that faith without works is dead. Prayers without actions mean little.”