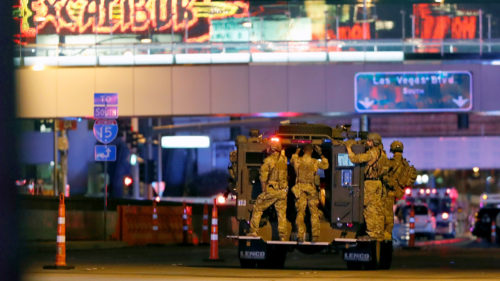 FBI agents ride an armored vehicle to a staging area on Oct. 2 after a mass shooting during a music festival on the Las Vegas Strip in Las Vegas, Nevada. Photo: Las Vegas Sun via Reuters

[Episcopal News Service] Leaders of the Anglican Communion called the weekend massacre in Las Vegas “truly shocking” in a statement released from Canterbury, England, by Episcopal Church Presiding Bishop Michael Curry, as faith leaders mobilize outreach efforts in the wake of the shooting, which killed at least 58 and injured hundreds more.

Clergy members in the Las Vegas area are providing pastoral care for victims and emergency personnel, memorial worship services are planned for this week, and a group of Episcopal bishops is organizing a nationwide effort to toll church bells Oct. 3 in memory of the dead.

“We are praying for the families and friends of those who have died and for the many people who have been wounded,” Curry said Oct. 2 in a video delivering the statement released by the primates, who are gathered in Canterbury. “We remember, too, everyone else caught up in this tragedy – including the emergency services (first responders). We pray that the peace of the Lord Jesus Christ will be with the people of Las Vegas as they endure this trauma.”

The Rev. Gay Clark Jennings, president of the Episcopal Church’s House of Deputies, also issued a statement in reaction to the deadly violence.

“This morning, my heart broke once again to learn about another mass shooting in the United States,” she said in part, offering her prayers for the people of the Episcopal Diocese of Nevada, with their deputies, and Bishop Dan Edwards.

The Roman Catholic Guardian Angel Cathedral is scheduled to host a prayer service for victims and their families at 5 p.m. Oct. 2, and the Episcopal Diocese of Nevada will hold a service at 7 p.m. Oct. 3 at Christ Church, the Episcopal church closest to the Las Vegas strip where the shooting happened.

Edwards, who will preach at the Oct. 3 service, told Episcopal News Service by phone that his office reached out to the chaplain at Sunrise Hospital & Medical Center to offer Episcopal clergy members to supplement the hospital’s own pastoral care. The diocese offered the same to the Las Vegas Metro Police Department and other first responders. Edwards did not yet have information on how many Episcopal priests and deacons had volunteered.

And with authorities saying blood supplies are running low in the massacre’s aftermath, the Diocese of Nevada plans to include a call for blood donations in its communications to Episcopalians in the state.

News of the massacre developed overnight Oct. 1, and by morning it was clear the shooting at an outdoor country music concert was the deadliest in modern U.S. history. Authorities said the gunman fired down on the crowd from a room on the 32nd floor of nearby Mandalay Bay Resort and Casino, sending concertgoers fleeing.

As of midday Oct. 2, the death toll was at 58, with more than 500 estimated injured. The gunman, identified as 64-year-old Stephen Paddock, later was found dead in the room, apparently after killing himself. Authorities also said he was found with more than 19 rifles.

Bishops United Against Gun Violence is calling on churches everywhere to toll their bells Oct. 3 at the same time, 9 a.m. PT (noon ET) in solidarity. The number of bell tolls will mirror the number of dead reported at that time.

Edwards, a member of Bishops United, said there are no simple reasons that the United States continues to see so many mass shootings, though he added there is a compelling case for looking toward the availability of assault weapons and the ability to possess them in numbers beyond what would be needed for legitimate personal use.

He also pointed to the social problems of loneliness, isolation and disconnection, factors that he said are all too common in Nevada.

It was too early to say whether members of local Episcopal congregations were among the victims or their families, though Edwards said an Episcopal priest’s son was one of the police officers who responded to the scene. The priest stayed up into the early morning until hearing that his son was OK.

The Rev. Barry Vaughn, rector at Christ Church, has not yet heard of anyone else in his congregation affected by the massacre, but a message on the church Facebook page invited parishioners to call or stop by if they need to talk to someone.

“I think everyone is just stunned by it right now,” Vaughn told Episcopal News Service. “The best thing that we can do is to reach out and love people who are affected by it. This sort of thing, it’s like a natural disaster. It can’t be predicted.

“It comes out of nowhere, although it doesn’t exactly come out of nowhere,” Vaughn said, echoing Edwards’ concern about the prevalence of guns in American society.

Reaction and condolences have been pouring in from all corners of the church, from the primates meeting underway in Canterbury to former Presiding Bishop Katharine Jefferts Schori, who previously served as the bishop of the Diocese of Nevada.

“Prayers are ascending for all in the midst of this carnage at Mandalay Bay,” she said in an emailed statement. “When, oh when, will we begin to limit the availability of weapons of mass destruction and death?

“May the souls of all the departed rest in peace, may the injured find healing, may all the responders find courage and strength, and may all of us know that God is to be found even in the midst of this evil.”

Bishops United Against Gun Violence issued a full statement on the massacre in the afternoon, offering not only prayers but also a call to political action on the issue of gun violence.

“It is entirely reasonable in the wake of mass killings perpetrated by murderers with assault weapons to ask lawmakers to remove such weapons from civilian hands. It is imperative to ask why, as early as this very week, Congress is likely to pass a bill making it easier to buy silencers,” the statement says, noting that silencers make it more difficult for law enforcement officials to detect gunfire as shootings are unfolding.

Jennings, the House of Deputies president, echoed that call to political action based on the Episcopal Church’s values.

“In 2015, General Convention passed resolution C005, titled ‘Implement Laws to Decrease Gun Violence,’ which includes a call to ban the sale of assault weapons to civilians,” she said. “May we have the strength to put our words into actions so that the lawmakers who represent us in Washington, D.C., and in state capitols across the land will enact sensible legislation that can prevent guns from falling into the hands of people whose hearts are torn with hatred, violence, and despair.”

Some members of Bishops United spoke with Edwards in the morning by conference call, offering their support.

“We assured him of our prayers and then we offered him any assistance that we as bishops could provide to him or the diocese of Nevada as they attend pastorally or otherwise to the victims of this massacre,” said Diocese of Connecticut Bishop Ian Douglas, one of the Bishops United conveners.

The bishops’ statement on the Las Vegas said that, as clichéd as it has become, Christians must offer “thoughts and payers.” They must pray for all who have been touched by the Las Vegas massacre and “by our country’s cripplingly frequent outbursts of lethal gun violence.”

“We must look into our own hearts and examine the ways in which we are culpable or complicit in the gun violence that surrounds us every day,” the bishops wrote.

They also said that Christians must act and “engage in the debates that shape how Americans live and die, especially when they die due to violence or neglect.” However, Christians must understand that a comprehensive solution to gun violence “will not simply be a matter of changing laws, but of changing lives.”

“Our country is feasting on anger that fuels rage, alienation and loneliness. From the White House to the halls of Congress to our own towns and perhaps at our own tables, we nurse grudges and resentments rather than cultivating the respect, concern and affection that each of us owes to the other,” the bishops said. “The leaders who should be speaking to us of reconciliation and the justice that must precede it too often instead stoke flames of division and mistrust. We must, as a nation, embrace prayerful resistance before our worse impulses consume us.”