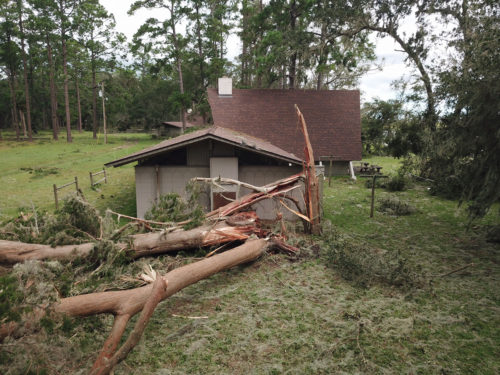 A tree narrowly missed a dormitory at the Diocese of Georgia’s Honey Creek Retreat Center where an Episcopal revival was set for Sept. 17. Photo: Frank Logue

[Episcopal News Service] A planned Sept. 17 Episcopal revival in the Diocese of Georgia, featuring Presiding Bishop Michael Curry, has been postponed in the wake of Hurricane Irma’s sweep over that state.

“Fearless Faith, Boundless Love,” planned as an old-fashioned Sunday afternoon tent meeting at the diocese’s Honey Creek Retreat Center, is now set for Jan. 20 at the same venue. About 1,300 people were expected to attend.

Anna Iredale, diocesan director of communications, said the decision to postpone the gathering was made to help congregations and Honey Creek focus on cleaning up after Hurricane Irma. There are many trees down on the Honey Creek property on the Intracoastal Waterway on the Georgia southeast coast. Buildings there are being assessed for structural damage, although none was immediately apparent, according to a post on Facebook.

Damage to churches is still being assessed as it is safe to venture outside. Some residents are only now allowed to venture into their neighborhoods. Thousands of evacuees from what is now Tropical Storm Irma won’t be able to return to coastal Georgia due to possible damage to two bridges, according to reports. Georgia Gov. Nathan Deal said the massive storm touched every corner of the state.

The diocese has also postponed a celebration to mark the new feast day of Deaconess Anna Alexander, the first black female deacon in the Episcopal Church. The event will now take place on the morning of Jan. 20 at Good Shepherd Church in Brunswick, Georgia, about 25 miles north of Honey Creek. 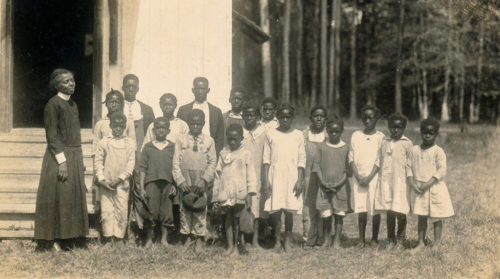 Deaconess Anna E.B. Alexander is shown with a group of her students in front of the Good Shepherd School, which she founded in Pennick, Georgia, near Brunswick. Photo: Diocese of Georgia

Many Georgia schools will be closed until at least Sept. 13. A youth event scheduled for the weekend and connected to the revival and Curry’s visit has been rescheduled to the weekend of Jan. 19-21.

And, the Sept. 17-19 clergy conference will not go on as planned, Iredale said. Curry will meet with the clergy during his January visit.

The September Georgia revival was supposed to be the third of six scheduled around the United States and the world this year and next. The remaining four revivals are now set for:

Curry has said he prays that the Episcopal revivals, which included gatherings in Dioceses of Pittsburgh and the Diocese of West Missouri earlier this year, will be the beginning of “a way of new life for us as this wonderful Episcopal Church, bearing witness to the love of God in Jesus in this culture and in this particular time in our national history.”

To do that, a revival must channel the emotions of the moment toward something bigger and lasting, Curry says. Thus, the planning for each revival begins with the diocese answering the question: “What does the good news of Jesus Christ look and sound like where you are?”

Once the diocese has discerned the answer to that question, members of the church-wide staff come to the diocese to help the diocese discern how to work to achieve that sense of good news in their communities, as well as with revival organizational details.

“It’s actually a campaign to grow the evangelism capacity of Episcopalians in an area,” according to the Rev. Stephanie Spellers, canon to the presiding bishop for evangelism, reconciliation and stewardship of creation. That campaign includes training Episcopalians in the skills needed to enact good news in their diocese before, during and after the event.

Editor’s note: Previous versions of this story contained two errors. One incorrectly reported that the celebration of Deaconess Alexander’s feast day would take place Sept. 17. It has been rescheduled to Jan. 20. Another version also incorrectly reported that the diocese’s fall clergy conference would continue as planned for Sept. 17-19. That gathering will not happen.