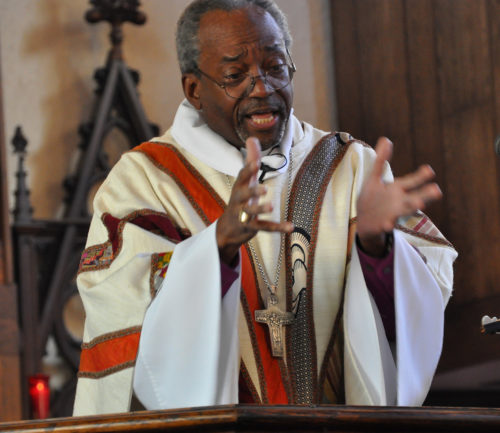 “Don’t be afraid to be people of love. Don’t be afraid to stand up for the name of Jesus. Don’t be afraid to reclaim this faith again. And don’t you be ashamed to be an Episcopalian,” Presiding Bishop Michael Curry tells the congregation Feb. 4 during an Absalom Jones Day Eucharist at Church of the Holy Cross in the Homewood West section of Pittsburgh. Photo: Mary Frances Schjonberg/Episcopal News Service

Editor’s note: A photo gallery of scenes from the Pittsburgh revival is here.

[Episcopal News Service – Pittsburgh, Pennsylvania] The old church tradition of the revival received new life in the Diocese of Pittsburgh Feb. 3-5 with a distinctly Episcopal feel.

The emphasis was on both sparking individuals’ faith lives and a commitment to show the love of Jesus beyond the four walls of their churches. Anchoring Episcopal revivals in the needs of the world was a constant theme of the weekend.

For those who think the words Episcopal and revival don’t go together, the size of the crowds, the depth of their emotion and Curry’s insistence begged to differ.

His prayer for this and subsequent revivals, he said during one of his four sermons, is that they will be the beginning of “a way of new life for us as this wonderful Episcopal Church, bearing witness to the love of God in Jesus in this culture and in this particular time in our national history.”

Curry’s Pilgrimage for Reconciliation, Healing and Evangelism in Southwestern Pennsylvania is the first of six revivals being planned with diocesan teams in different cities around the country and the world this year and in 2018.

“I want to suggest this morning that we need a revival inside the church and out – not just in the Episcopal Church. For there is much that seeks to articulate itself as Christianity that doesn’t look anything like Jesus,” Curry said in his Feb. 4 sermon during an Absalom Jones Day Eucharist at the Episcopal Church of the Holy Cross. “And if it doesn’t walk and talk and look and smell like Jesus, it’s not Christian … and if it’s going to look like Jesus, it’s got to look like love.”

Curry said the revival of the church, centered in God’s love, is not about a church rejuvenated for its own sake. The church’s revival must spill God’s love out into the world “until justice rolls down like a mighty stream,” he said, echoing Micah. 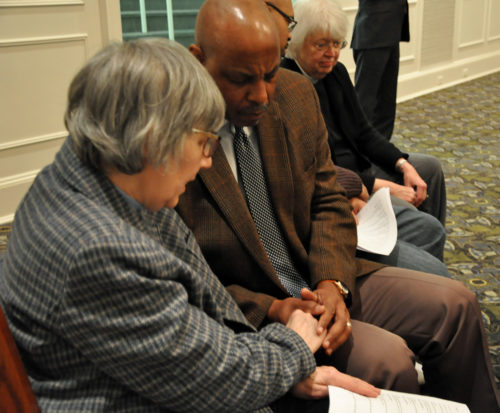 “We who are followers of Jesus believe that the way of love and the way of Jesus is the key to doing that. But, we join hands with people of other faiths and people of goodwill – anyone who wants to help us end what so often is a nightmare of poverty and injustice and bigotry and wrong and violence, and realize God’s dream of true harmony and peace and justice for everybody.”

The six revivals will vary in design, according to a recent press release, but most will be multiday events that feature dynamic worship and preaching, offerings from local artists and musicians, personal testimony and storytelling, speakers, invitations to local social action, engagement with young leaders, and intentional outreach with people who aren’t active in a faith community. Pittsburgh Episcopalians were encouraged to bring with them neighbors who were not part of a faith community.

The Rev. Stephanie Spellers, canon to the presiding bishop for evangelism, reconciliation and creation, is organizing those efforts, along with a team including Consulting Evangelist for Revivals Carrie Headington and Evangelism Associate Emily Gallagher. The planning for each begins with asking diocesan members what the good news of Jesus looks like in their communities. Pittsburgh Episcopalians discerned that the good news would help them cross the divides of their area, build relationships with neighbors of different traditions and start reconciling with each other, Spellers said during the news conference. Thus, that was the theme of the Pittsburgh gathering.

She and others will return to the dioceses after the revivals to work with Episcopalians to cultivate a group of leaders who have new abilities, new relationships and a new common purpose to further enact Jesus’ love in their communities.

“Hopefully, Pittsburgh – not just the diocese but the city and surrounding communities – will look different. And they’ll feel like there was a church that showed up, not only to talk about good news but to be good news,” she said, describing the hoped-for outcome.  Episcopalians will understand that they have grown into being new leaders of the Jesus Movement, she added.

Curry’s call for reconciliation and healing first rang out Feb. 3 during the opening event, an ecumenical service of repentance and reconciliation at Pittsburgh Theological Seminary’s Hicks Chapel. 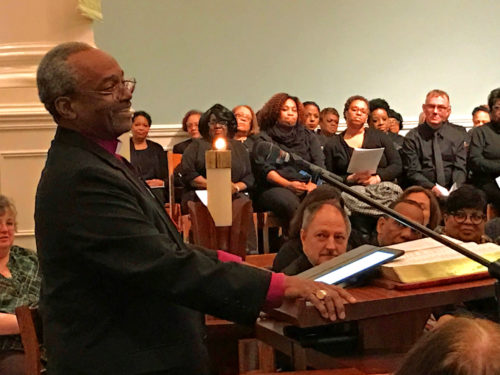 God is calling Christians to a deep and radical sense of repentance, Curry said. The world needs such a manifestation of Christianity, he contended, because it will lead to a desperately needed reconciliation among a litany of ethnic groups and even among “red folk and blue folk,” referring to the nation’s political divisions. Finding ways for Republicans and Democrats to discover common ground echoed through Curry’s sermons.

The congregation greeted Curry’s words at the seminary with murmurings of assent, shouts of agreement and, soon, drum rolls and keyboard riffs from the Rodman Street Missionary Baptist Church choir, whose members also sang during the service. That audience participation was hallmark of all four of Curry’s sermons during the weekend and it included the presiding bishop leading every congregation in song.

Curry sounded a theme that would echo throughout the weekend: Christians must be people of compassion, people of goodwill, people who dare to live the Sermon on the Mount and Jesus’ words in the Matthew 25:31-46. For instance, he said, people setting social policy or enacting legislation ought to measure it by the core Christian value of “love thy neighbor as thyself.”

Twelve leaders and senior pastors from local Roman Catholic, Orthodox, Protestant and African-American churches gathered with elected and civic leaders and members of the Diocese of Pittsburgh for the service that many called a historic commitment to ecumenical conversation. The revival began with a revival of the clergy’s commitment to their ministry. Roman Catholic Pittsburgh Bishop David Zubik began a 10-part confession based on the Church of Scotland’s Ministerial Challenge of 1671, lamenting clergy’s attention to the business and accolades of the world. “We have been unfaithful to our own souls, and to our sisters and brothers; unfaithful in the pulpit, in fellowship, in discipline, in the Church,” Zubik said. 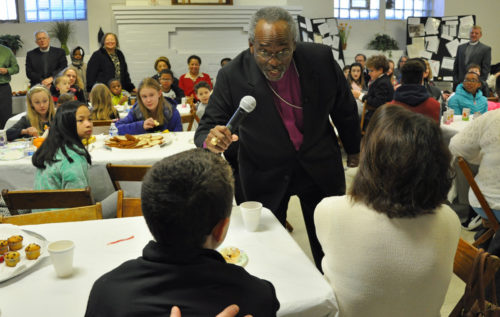 Presiding Bishop Michael Curry makes the rounds in the undercroft of Church of the Holy Cross during a Feb. 4 breakfast meeting with youth of the Diocese of Pittsburgh. Photo: Mary Frances Schjonberg/Episcopal News Service

Curry met the next morning with some of the youth of the diocese at Holy Cross in the struggling Homewood West neighborhood of Pittsburgh. Telling them that they were growing up in a time of complex change, he said technological progress is important but “progress as a way of love, progress in living, progress in learning how to live together in all of our differences and varieties may be the ultimate progress that will make the difference for us all.”

After the breakfast meeting, Curry went upstairs for a rousing Absalom Jones Day Eucharist in the packed nave. During his sermon, the presiding bishop continued his call for Christians to act out of the selfless love exemplified by Jesus on the cross rather than “unenlightened self-interest.”

Saying that the “way of love can save us all,” Curry asked the congregation to imagine how legislatures, corporate board rooms, schools and health care in America would be different if they were approached “not by what I can get out of it but how it serves the common good.” 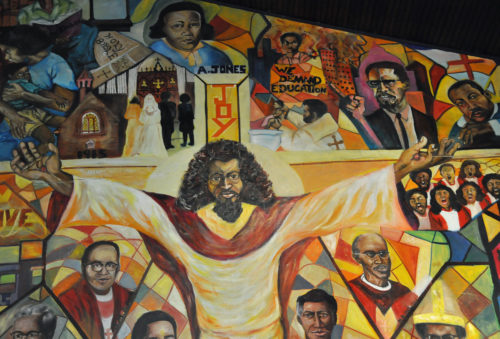 Absalom Jones, the first African-American ordained a priest in the Episcopal Church, looks down above a black Jesus in a mural painted on the wall of the side chapel at Church of the Holy Cross in the Homewood West section of Pittsburgh. Photo: Mary Frances Schjonberg/Episcopal News Service

As an Episcopal sort of altar call, Curry invited people to sing “There Is a Balm in Gilead” in which Christians are told that it does not matter if they are not good at preaching or praying. Instead, they should simply tell someone else about the love of Jesus. “As we sing, in your own way I invite you to recommit – or commit – yourself to following the way of Jesus, to being a part of his movement in this world,” the presiding bishop said.

Video of the entire Eucharist is here. The presiding bishop’s sermon begins at the 22-minute, 6-second mark.

Curry returned to Pittsburgh Theological Seminary that afternoon to welcome Episcopalians and others from across the diocese for a conversation billed as “Bridging Divides and Healing Communities” and aimed at beginning to form relationships among individuals and churches in hopes that they can work together to address hopelessness, poverty and addiction in local communities.

Kim Karashin, Pittsburgh’s canon for mission, told Episcopal News Service before the conversations began that the “best case scenario” for the gathering would be that people agree to meet again to talk about these issues but that this gathering was about getting to know each other. “We’re not going to move the needle without building relationships,” she said. 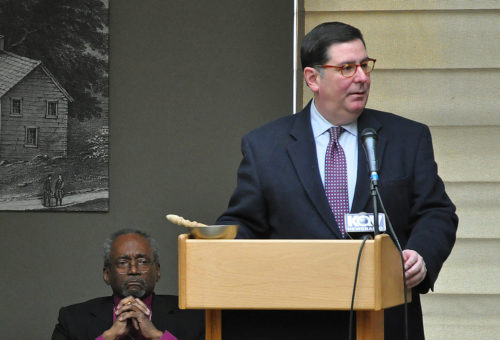 Presiding Bishop Michael Curry listens Feb. 4 as Pittsburgh Mayor Bill Peduto praises the Episcopal Church’s efforts to build bridges across the city’s divided neighborhoods. The mayor spoke at Pittsburgh Theological Seminary before a conversation aimed at forming relationships among individuals and churches in hopes that they can work together to address hopelessness, poverty and addiction in local communities. Photo: Mary Frances Schjonberg/Episcopal News Service

Pittsburgh Mayor Bill Peduto, who joined in welcoming people to the conversation, said later during the news conference that Pittsburgh is a divided community needing this sort of training in conversation to cultivate leaders who can step in during emergencies and try to move people into productive ways of acting.

“Pulling a community together only happens with things like this,” he said. “You have to be pro-active; you can’t wait until something happens. It’s taking these actions that will help build those bridges that we speak about.”

The last day of the Pittsburgh revival featured two Eucharists: the first at Calvary Episcopal Church, and the second 40 minutes away at St. Stephen’s Episcopal Church, McKeesport, in the economically struggling Monongahela River Valley south of Pittsburgh. Representatives of nearly three dozen Episcopal congregations gathered at St. Stephen’s to support “The Mon Valley Mission,” which is a new effort to revive the faith and well-being of the river communities.

Curry used the morning’s gospel story of Jesus and the Samaritan woman at the well to tell the McKeesport congregation that God pushes people to build bridges between people who society says are enemies. In their conversations at the well, Curry said, both Jesus and the Samaritan woman learn something about each other and themselves. Moreover, the woman discovered within her the image of God and she experienced the love of God as being active in her life, he said. 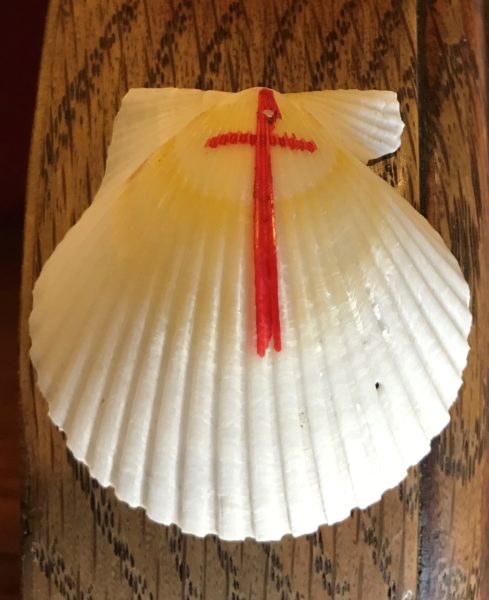 Then, Curry said, she became “the first evangelist in the New Testament” when she told her neighbors what happened at the well with Jesus.

Each person at St. Stephen’s received a small scallop shell with a red cross painted on it, an ancient symbol of pilgrims, to symbolize their pilgrimage to take the good news of Jesus into the world. The service ended with Curry commissioning all 320 people in attendance to be disciples sharing the good news of Jesus.

Editor’s note: This story was updated May 22, 2017, to reflect a change of dates for the Diocese of Georgia revival.