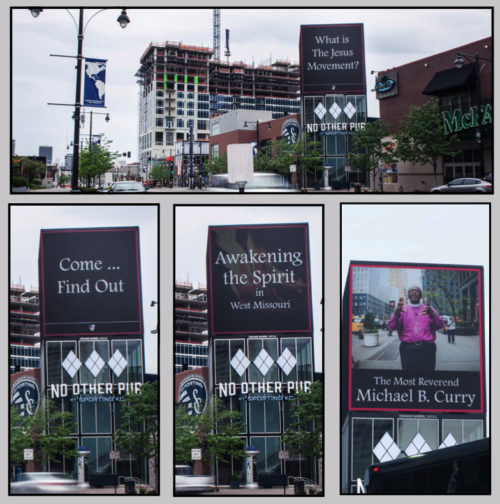 [Episcopal News Service] It is safe to say that never has an Episcopal revival competed with a Kentucky Derby party or been the unofficial opening act for a Garth Brooks concert.

On the afternoon of May 6 in the Power & Light District of downtown Kansas City, Missouri, all three events coincide in what those involved in planning “Awakening the Spirit in West Missouri” say will be a perfect opportunity to show the city what the Episcopal branch of the Jesus Movement is all about.

“If Jesus came back today, where would he go to make his mark?” the Rev. Steve Rottgers, Diocese of West Missouri’s canon to the ordinary and Awakening organizer, asked rhetorically.

Two places, he suggested, would be the vibrant P&L, as it is known, and Hammons Field, a minor-league baseball park in downtown Springfield, Missouri. Springfield is in the southern part of a diocese that stretches north to south from Iowa to Arkansas.

In Kansas City, Presiding Bishop Michael Curry and others will have the Kansas City Live stage from noon to 3 p.m. The venue covers an entire city block and features two surrounding levels of restaurants, taverns and nightspots. The stage area seats 800 people but thousands potentially will be wandering through the venues. Some will be headed for the No Other Pub, which is hosting a sold-out Derby viewing party beginning at 2 p.m. to raise money for two local children’s charities. Some will also be streaming into the P&L District for the 3 p.m. Garth Brooks concert at the Sprint Center next door.

On May 7, the Awakening moves south to Springfield and Hammons Field. “I can’t think of a better idea than putting the presiding bishop at home plate to knock a home run,” said Rottgers.

A few blocks away the Springfield Artsfest will be in its final day. Members of diocesan youth groups will be doing Jesus-related arts and crafts in a booth there and handing out flyers about the revival. 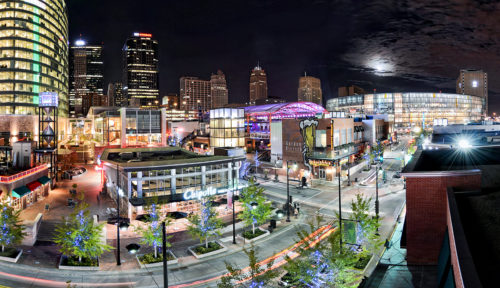 The Kansas City Live stage (under the curved purple roof in photo center) in the Power and Light District of downtown Kansas City, Missouri, will be the setting for the May 6 session of the Diocese of West Missouri’s “Awakening the Spirit” revival. Photo: The Cordish Companies

West Missouri’s Awakening will be nothing like the first Episcopal Church revival, which took place Feb. 3-5 in the Diocese of Pittsburgh. West Missouri is not even using the term “revival.” That is the point: The Episcopal Church’s six revivals planned for this year and next are not cookie-cutter events designed to be replicated in every place.

“Every one of these Episcopal revivals is going to be different because every one of them is a unique answer to the question: What does the good news of Jesus Christ look and sound like where you are?” explained the Rev. Stephanie Spellers, canon to the presiding bishop for evangelism, reconciliation and creation.

In Pittsburgh, the good news was centered, she said, on reconciliation, crossing racial and geographic boundaries, praying together and healing broken communities. The gatherings tailored for that work took place in two Episcopal churches in Pittsburgh and one in McKeesport and at Pittsburgh Theological Seminary.

“In West Missouri, Springfield and Kansas City, the good news looks like a vibrant loving church in the public square, full on,” Spellers said.

The goal is the same. “Our great hope is that these revivals both awaken the spirit within Episcopalians and with the communities around us,” she said. “And that Episcopalians will grow in their love for Jesus even as we welcome our neighbors into this loving, life-giving, liberating way with Jesus and as we join together in the Jesus Movement that changes us and changes society.” 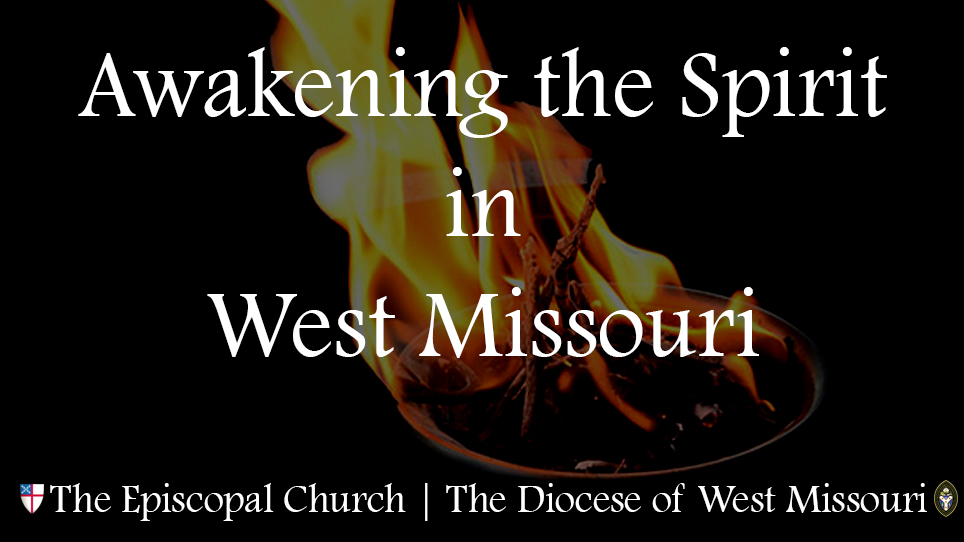 Spellers said it is “very Anglican to pray for social and personal conversion.”

“The revival is never just about the big event. It’s actually a campaign to grow the evangelism capacity of Episcopalians in an area,” Spellers said. “We know that there will be this awakening of the spirit on those days but the spirit has awakened in West Missouri in all the steps leading this and will continue to stir the spirit afterward. That’s the point of a revival.”

Once the diocese has discerned what enacting the good news of Jesus would look like in its communities, members of the church-wide staff come to the diocese to help with organizational details and to begin that work of capacity building. Moreover, they return to the dioceses after the events to work with Episcopalians to cultivate leaders who have new abilities, new relationships and a new common purpose to further enact Jesus’ love in their communities.

In West Missouri, some steps leading up the two-day events have been big and visible, such as more than 200 people taking evangelism training earlier this year. Similar training will take place in each of the dioceses hosting revivals. Rottgers said many congregations have already done evangelism training, and more is set for this summer.

“We’re hoping to break down the barriers that have kept Episcopalians from being authentic Christians,” he said, such as “people get into cliques or they don’t talk, or they won’t share or when newcomers show up they shy away.”

“We’re looking for this as a way to wake us up,” he said.

Other steps were behind the scenes. For instance, Rottgers agreed to book the Kansas City Live stage without knowing just how the diocese would cover the $18,000 rental cost. Then he mentioned the plan to a lay member of the diocese who wrote a check for just less than $10,000 as the “down payment.” 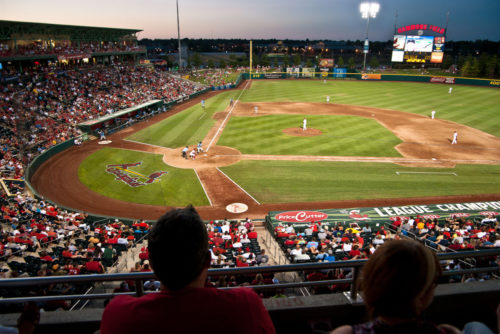 Presiding Bishop Michael Curry will be in the Hammons Field batter’s box May 7 for the second day of “Awakening the Spirit in West Missouri,” the Diocese of West Missouri’s revival. Photo: SpringfieldMO.org

When he called Hammons Field to ask about its availability, the afternoon of May 7 turned out to be a rare time when neither the Springfield Cardinals baseball team nor the Missouri State and Southern Missouri University teams had home games. The rental fee for the stadium is $1,500. Leasing the parking lot across the street and charging $5 a car will make the entire Springfield event pay for itself, according to Rottgers.

While these Episcopal revivals are not just about “energized worship,” in Spellers words, worship is at the center in both Kansas City and Springfield. Both services will include a wide variety of hymns, liturgical dancers from St. Augustine’s Episcopal Church and musicians playing instruments ranging from brass to washboards. The Sudanese music and drum group from St. Paul’s Episcopal Church will offer the call to worship.

In Springfield, a bluegrass band from Branson, Missouri, will provide the prelude and a gospel choir will back Curry from the two sections behind home plate. And ballpark food – hot dogs, hamburgers, peanuts, popcorn and beer – will be for sale.

Speakers, including Spellers, Consulting Evangelist for Revivals Carrie Boren Headington, who is helping organize the revivals, and West Missouri Bishop Martin Field, will warm up the crowd ahead of Curry’s sermon.

Prayer teams of lay and clergy will spend nearly 20 minutes of the service at stations offering prayers and anointing for reconciliation, re-affirmation of faith and/or healing. “It’ll be kind of like an Episcopal altar call,” Rottgers said.

Cards featuring three ways to electronically follow the order of service will be handed out, said Rottgers.

“Of course, people will be wondering what’s going on in there,” Spellers said. “We’re not going to wait for them to come in, there will also be Episcopalians going out into those crowds” to hand out those cards, answer questions and connect with people. 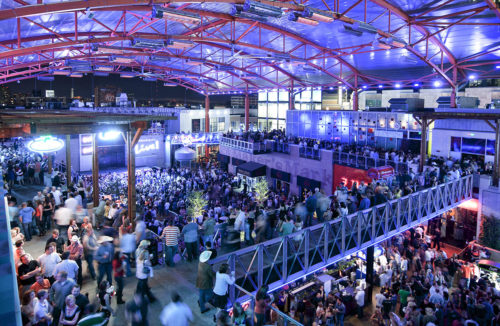 Nearly 800 people can fit into the Kansas City Live stage area, and hundreds, if not thousands, of other people will be milling around the area during the May 6 session of the Diocese of West Missouri’s “Awakening the Spirit” revival. Photo: The Cordish Companies

West Missouri’s Awakening is the second of the six revivals. The next four revivals are:

The Georgia event will look like a more old-fashioned Sunday afternoon tent meeting. Being held at the diocese’s Honey Creek Retreat Center, it will mark the new feast day of Deaconess Anna Alexander, the first black female deacon in the Episcopal Church.

In San Joaquin, Episcopalians plan to celebrate the return of their cathedral building after the majority of diocesan members and leaders left the Episcopal Church in 2007 but attempted to retain Church property. Bishop David Rice will be seated in the cathedral.

The revival will emphasize that for San Joaquin Episcopalians, the good news of Jesus means being in solidarity with immigrants and being “a loving and liberating church out loud [and in public] with no apologies. And it looks like being a resurrection church because, God knows, that is what they are in San Joaquin,” Spellers said.

The revival idea is catching on across the Episcopal Church. For instance, she said, Iowa Bishop Alan Scarfe has asked his diocese for the next three years to turn each of his congregational visitations into revivals. The diocese developed a toolkit and other resources for doing so. The visitation/revival that had been set for the first weekend in May, however, has been cancelled and the church is bussing people to the West Missouri revival.

Spellers said she and others “are trying hard to share resources and connect groups that are hosting revivals so that we can learn from each and pray for each other.”