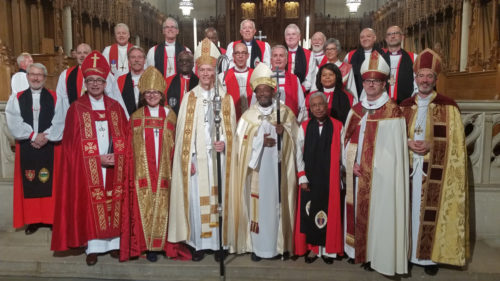 Rodman was elected on March 4, marking the culmination of a search that began after former bishop Michael Curry was elected presiding bishop of the Episcopal Church at the 78th General Convention in 2015.

Watch the ordination and consecration.

The Drummers of St. Cyprian’s, Oxford, signaled the start of the service at 10:30 a.m., their synchronized rhythm immediately creating an atmosphere of high energy and celebration. The steady beat of their drums provided the backdrop for the early part of the procession, which included liturgical dancer Diana Turner-Forte, an 80-person choir composed of singers from churches across the diocese, service participants, ecumenical and interfaith clergy, and diocesan clergy. The choir joined the tympani and brass instruments in heralding the rest of the procession, including the visiting and co-consecrating bishops.

Readings were presented in both English and Spanish, and both Spanish and American Sign Language interpreters provided translation throughout the service.

Diocese of Massachusetts Bishop Suffragan Gayle Harris preached, by turns drawing laughter, applause, cheers and murmurs of agreement. She spoke of how in a world of immense challenges, North Carolina is blessed, noting the state has mountains, beaches, forests, NASCAR and the best barbecue in the world. And perhaps the biggest blessing of all is North Carolina’s proven wisdom in the selection of bishops, from Presiding Bishop Michael Curry, who “reminds us we’re disciples,” to Bishop Hodges-Copple and her “passion for mission and evangelism,” to the Rt. Rev. Gary Gloster, bishop suffragan of the Diocese of North Carolina, retired, whom she called a “wise and faithful witness.”

“And now,” said Harris, “you have elected Sam Rodman to lead you and be a companion with you on this continuing journey.” She continued, “He is and will be a servant child of God with you, and who I know lives in and with the gospel of Jesus Christ. He seeks not only to abide in God with hope and faith and love for himself, but to offer that readily to others.”

After being presented the gifts of a stole, chasuble, liturgical vestments from the Diocese of Botswana, cope, pectoral cross, ring, mitre, crozier and the Holy Bible, Rodman followed the Peace with his thanks, saying, “Someone asked me this week if I would be a different person after today, and I said, no, I’ll be the same person, just with a bigger hat. But I feel like I have a bigger heart today….and it is that grateful heart that I offer to you, the people of North Carolina.”

Rodman spent his first Sunday in his new position visiting St. Mark’s and La Guadalupana, Wilson, where, before leading a bilingual service, he blessed the church’s new soccer fields nearby.

The weekend of celebration began July 14 with a clergy luncheon with the presiding bishop and a dinner honoring Rodman.

Prior to Rodman’s election, he served as the special projects officer for the Episcopal Diocese of Massachusetts, a tenure that began after 16 years as the rector of St. Michael’s Episcopal Church in Milton, Massachusetts. Following the election, Rodman and his wife of 32 years, Deborah, relocated to Raleigh.