He was elected on the third ballot by the delegates gathered for a Special Electing Convention in Phillips Chapel at Canterbury School in Greensboro, North Carolina. 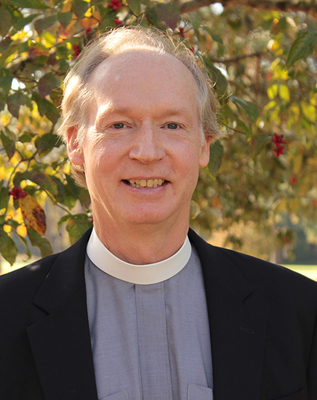 “I am deeply honored and grateful and, with God’s help, I accept this call to be your next bishop diocesan,” Rodman said. “The prospect of following and building upon the leadership and legacy of Bishop Michael Curry is both humbling and inspiring. I trust that the Holy Spirit, moving through the Diocese of North Carolina, will continue to light the way and guide our path together.”

Rodman currently serves as the special projects officer for the Diocese of Massachusetts, a role he took on after spending five years as the diocesan project manager for campaign initiatives, where he engaged congregations, clergy and laity, in collaborative local and global mission through the Together Now campaign, helping to raise $20 million to fund these initiatives. Prior to that, Rodman spent 16 years as the rector of St. Michael’s in Milton, Massachusetts, during which the parish established a seven-year plan that included a capital campaign for a major renovation of the church building.

The election is the culmination of a process that began when the Diocese of North Carolina’s former bishop, the Most Rev. Michael Curry, was elected presiding bishop of The Episcopal Church at the 78th General Convention in Salt Lake City, Utah, in June 2015. Since his installation in November 2015, the diocese has been led by the Rt. Rev. Anne Hodges-Copple; elected bishop suffragan in the Diocese of North Carolina in 2013, she has served as bishop diocesan pro tempore during the extensive search.

Four nominees were a part of the search process. In addition to Rodman, the other three candidates were:

Following the announcement of the final slate, Rodman and his fellow candidates spent a great deal of time sharing information with the people of North Carolina, including personal statements, biographies, theological reflections and a Q&A. The candidates each created an introductory video to share, and then took part in a series of virtual town halls, whereby each candidate was live online for an hour, answering questions submitted by people from around the diocese. The finale came when the candidates arrived in North Carolina to do a 12-stop tour around the state, taking part in panel discussions or town halls at each one.

Ordained in 1988, Rodman is a graduate of Bates College and Virginia Theological Seminary. He is married to Deborah Rodman, and they are the parents of two adult daughters. In his free time, Rodman enjoys basketball, golf, kayaking, walking his dog, crosswords and creative writing.

The Diocese of North Carolina is comprised of 48,000 people gathered into 112 congregations and nine campus ministries throughout 38 counties in the central part of North Carolina. The diocesan vision is to be a community of disciples committed to following Jesus Christ into the dream of God.

Pending the canonically required consent of a majority of the Episcopal Church’s diocesan standing committees and bishops with jurisdiction, Rodman will be ordained and consecrated as the XII Bishop Diocesan of the Diocese of North Carolina on July 15 at the Duke University Chapel in Durham, North Carolina.