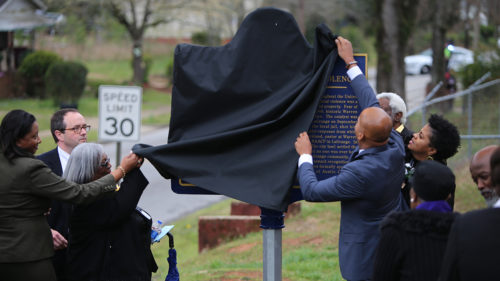 A historical marker remembering lynching victims in Georgia is unveiled on March 18 in LaGrange. Photo courtesy of Wesley Edwards

[Episcopal News Service] In one of the darkest corners of American history – the lynching of black victims by white attackers – details of many of these decades-old killings have long remained a mystery as present-day researchers seek to identify the victims and bring racial healing to their communities.

Those efforts have gained steam in Georgia, where last year the Episcopal Diocese of Atlanta launched a three-year series of pilgrimages intended to bring these victims and their stories to light. At the same time, a group of residents in one west-central Georgia community, LaGrange, has been working with police, civic leaders and churches to come to grips with a nearly forgotten lynching in their city.

“The wind of the spirit is blowing … and moving us to the realization that in order [for] racial healing to occur then we have to deal with lynching,” said Catherine Meeks, who heads the Diocese of Atlanta’s Beloved Community: Commission for Dismantling Racism.

Meeks praises the work of the LaGrange group, named Troup Together, after Troup County, where the town is located. The diocese and Troup Together are pursuing separate but parallel efforts with similar goals: to remember lynching victims, reveal their untold stories and encourage racial reconciliation.

Nearly two years of work by Troup Together culminated in January in a public apology issued by Police Chief Lou Dekmar for his department’s role in the lynching of Austin Callaway in 1940. Callaway was found gravely injured on the side of a highway after being taken from a cell at the LaGrange jail by a white mob, an injustice enabled by LaGrange officers.

And in March, white pastors spoke at a church service to confess white congregations’ complicity in Callaway’s death and other acts of racial violence. That service was followed by a dedication of a historical marker at Warren Temple United Methodist Church and a cemetery service for Callaway and more than 500 lynching victims in Troup County and around the state.

St. Mark’s Episcopal Church is among several LaGrange congregations working with Troup Together. The church hosted a luncheon for Callaway’s relatives and those of two other lynching victims before they attended the church service in March.

“While we can’t change [the past], we can acknowledge the horror of it and regret it and make our atonement,” said Janet Beall, a retired educator and longtime member of St. Mark’s who attended the ceremonies along with St. Mark’s rector, the Very Rev. R. Allen Pruitt.

Troup Together evolved from a biracial faith community in LaGrange called Alterna that two years ago read and discussed “The Cross and the Lynching Tree,” a 2011 book by James H. Cone. The group’s subsequent research into local history turned up information on the lynching of Callaway. That led to a prayer service in September 2015 marking 75 years since the killing. The reconciliation efforts have grown from there.

“Our goal is to learn to love our neighbors, and I find that we really can’t do that in any meaningful way unless we know each other’s stories,” said Wesley Edwards, one of the leaders of Troup Together. “Even though we live in the same community we don’t share the same histories as racial groups, and there’s a lot that we don’t know or appreciate across the boundaries of race about each other.”

Cone’s book draws a direct parallel between Jesus’ death on the cross and the deep suffering of American blacks that continued after slavery into what he identifies as “the lynching era,” 1880 to 1940.

“In that era, the lynching tree joined the cross as the most emotionally charged symbols in the African American community,” Cone says. “Both the cross and the lynching tree represented the worst in human beings and at the same time ‘an unquenchable ontological thirst’ for life that refuses to let the worst determine our final meaning.”

In segregated communities across the South, the intended message of a lynching was fear, Meeks said.

“The purpose of it was to terrorize black people and any white people who were going to sympathize with black people, so lynching was about terror,” Meeks said. Its roots were in a thread of American society that held a belief in white supremacy, she said, “and that same white supremacy thread continues to haunt us in this country.”

The Commission on Dismantling Racism, whose anti-racism training program has served as a model for other Episcopal dioceses, is working to honor the 600 or so people documented to have died from lynching in Georgia. Its first pilgrimage, in October, brought nearly 200 people to Macon, Georgia, and the site where in 1922 a lynch mob dumped the body of John “Cockey” Glover.

The commission has a busy 2017 planned. A second pilgrimage is set for Athens this October, Meeks said, and her commission is working to open a center for racial healing near Morehouse College in Atlanta by that month. The commission also is encouraging parishes in the diocese to hold screenings of the movie “13th,” about racial injustice in the American prison system.

Meeks and her team also want to establish a permanent memorial to Georgia’s lynching victims that incorporates the list of names, similar to the Vietnam Veterans Memorial in Washington, D.C. Meeks is in contact with the Center for Civil and Human Rights in Atlanta as one possible location.

“There is great interest in this idea,” Meeks said, estimating a two-year timeframe for the project to come together.

There are plenty of victims to remember, including some whose precise fate remains unknown.

Bobbie Hart, one of the Troup Together leaders, never knew her paternal grandfather. He vanished decades ago while working on the railroad, and the more Hart and her sister learned about him and his mysterious disappearance the more they became convinced that he had been the victim of a lynching.

Hart, who was raised Baptist and now attends a Methodist church, knows relatives of Austin Callaway but was unaware of the lynching until working on Troup Together with Edwards. She was overcome with emotion while attending the group’s prayer service for Callaway in 2015.

“I felt a sadness come over me and I prayed and I felt the need to ask the Lord to forgive the men that did this to them,” Hart, now 64, said. “And I felt that it was important that, me being a black female … I chose to forgive this injustice.”