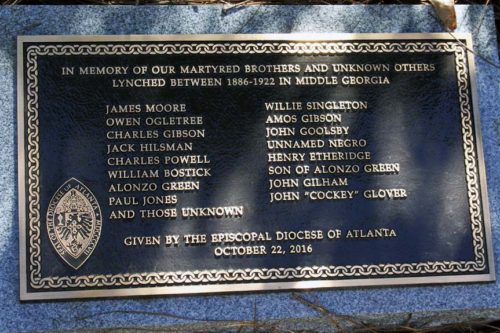 A stone and bronze plaque unveiled Oct. 22 in front of the Douglass Theatre in Macon, Georgia, marks the location where a lynch mob discarded the body of their victim John “Cockey” Glover in 1922. The plaque was unveiled during a pilgrimage by 175 people sponsored by the Episcopal Diocese of Atlanta’s Beloved Community Commission for Dismantling Racism. Photo: Hala Hess White

[Diocese of Atlanta] In an effort to confront racism and heal from it, 175 people made a pilgrimage Saturday, Oct. 22 to Macon and marked where a 1922 lynch mob dumped the body of John “Cockey” Glover.

“Telling the truth is the only path to real healing,” Catherine Meeks told the crowd assembled inside the Douglass Theatre, a historic landmark in Macon established by one of the city’s first African-American entrepreneurs. “People want to say that that the truth will lead to division, but it’s the lies that keep us divided.”

Meeks, a former professor of African-American studies at nearby Mercer University, led the pilgrimage on behalf of the Episcopal Diocese of Atlanta’s Beloved Community Commission for Dismantling Racism, which she chairs.

The pilgrimage grew out of the commission’s four-year effort to remove barriers to seeing God’s face in everyone. The commission last month hosted Alabama death penalty lawyer and “Just Mercy” author Bryan Stevenson, who drew a packed crowd at St. Luke’s Episcopal Church in Atlanta. “When you go to spaces where there has been abuse, trauma and horror, and do something reflective, you can begin to respond to the trauma,” he said.

The daylong pilgrimage began before dawn at Meeks’ home church, St. Augustine’s Episcopal in Morrow, where buses filled with people of various colors, ages, cultures, denominations and religions. Most were from the Atlanta diocese; others came from Alabama, Tennessee, North Carolina, Massachusetts and California. Some are planning similar commemorations around race-related violence where they live.

In general, those on the pilgrimage were seeking to change the narrative of racially-charged violence—including modern-day police killings of unarmed people of color—by bearing witness publically to its wrongness, sanctifying the lives of all people and honoring Glover and others as martyrs.

“Why am I as a white person 50 times safer walking down the street than a black person?”  asked Chris Wight of Oak View, California, who works at a ministry devoted to social justice and was in Georgia to visit a similar one and support the pilgrimage. “In my local area, native peoples’ lands were built over by freeways and their histories demolished. We need to look at true histories, not whitewashed history.” 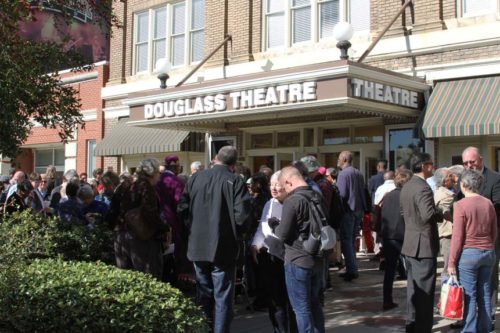 The body of lynching victim John “Cockey” Glover was dumped in front of  the historic Douglass Theatre in Macon, Georgia, by a lynch mob in 1922. Built by African- American entrepreneur Charles Douglass, the theater was a popular gathering place for the community and Glover’s body was left there “to make a statement,” said Theatre Director Gina Ward. Photo: Hala Hess White

At the Macon theater, the group celebrated Eucharist with Atlanta Bishop Robert C. Wright, who said that racial reconciliation isn’t about guilt or defensiveness—it’s critical to loving others like Jesus loves. “We ground what is and could be in this common cup,” he said.

The sermon by Simeon Bruce, a fellow in Atlanta’s Episcopal Service Corps, urged listeners that remembering must be followed by repenting from judging others and learning from our mistakes.

The service continued outside the theater, where on Aug. 1, 1922, Glover’s lynched body had been dumped “to make a statement,” said Gina Ward, the theater’s director.

Local historian Andrew Manis said Glover appeared at a poolroom drunk and waving a pistol, and when law enforcement responded, he fatally shot a white policeman and two white customers. He went into hiding as police searched and harassed the African-American community and the Ku Klux Klan put a $100 bounty on him. The Douglass Theatre, which had been built by African-American entrepreneur Charles Douglass, usually was a safe place for the community, but during the manhunt, Douglass himself received death threats.

As an American, Glover was supposed to have the constitutional right to equal protection under the law and a fair trial, guaranteed by the 14th Amendment passed in 1868. Still, in the years following the Civil War, rights were not applied equally. From 1886 to 1992, after the end of Reconstruction, at least 15 people were lynched in middle Georgia.

Two days after the poolroom shootings, Glover was apprehended 50 miles north in Griffin, but his police transport ended before he got to Macon.

“Just north of the city, they were stopped by a mob of an estimated 400 angry white men, who grabbed up Glover from the back floorboard of the car. [They] emptied shotguns into his body, left him lying face up in a small swampy ditch … then decided to dump the body in the back of a truck and take it into Macon,” Manis wrote in “Macon Black and White, An Unutterable Separation in the American Century.”

In downtown Macon, the biggest city in central Georgia then and now, “the mob jerked Glover’s remains out of the truck and dumped it in the street, where his clothing was cut to shreds and sold as souvenirs,” Manis wrote. “Later, the nearly nude body was dumped in the foyer of the Douglass Theatre. Someone shouted, ‘Get the gasoline,’ but the police arrived just before the body could be incinerated inside the theater. By that time hundreds of whites had converged on the area and overwhelmed police. Pushing and shoving, many shouted, ‘Burn him!’ or ‘Hang him up.’ Others yelled, ‘Let’s get a look at him.’”

On the spot where that happened, the service Saturday continued under a bright autumn sun.

Wright unveiled a stone and bronze marker embedded on the ground with Glover’s name and “martyred brothers and unknown others” lynched from 1886 to 1922 in middle Georgia, with the date and seal of the Atlanta diocese. Although almost a century has passed since Glover’s death, one purpose of the pilgrimage was to present lynchings in the context of injustice toward people of color, which many see continuing today in instances where police fatally shoot unarmed African-American men.

The Rev. Kimberly Jackson, an associate rector at All Saints Episcopal Church in Atlanta, led a litany of remembrance.

“We remember these martyrs who were targeted by racial terrorism and stripped of their humanity,” she said before reciting the names of Glover; James Moore; Owen Ogletree; Charles Gibson; Jack Hilsman; Charles Powell; William Bostick; Alonzo Green and his unnamed son; Paul Jones; Willie Singleton; Amos Gibson; John Goolsby; Henry Etheridge; John Gilham; and those unknown. “We lament the historical silence that surrounds their lynching and buries the truth,” she recited.

“Today we commit to break the silence, to uncover the hard truths of our history and to face the legacy of racial terrorism,” the congregation responded.

“We are poets and prophets, protestors and protectors, committed to dismantling racism in our homes, churches, schools, and beyond… Let us go forth in the world until justice, real justice, comes,” concluded Jackson.

One of the first offerings was a cluster of white sage. It came from Wight’s front yard, a sacred herb for native people in his part of California and his way of marking the sanctity of life across cultures.

Recognizing the civic and personal importance

The event attracted the blessing of the Macon-Bibb County government, which declared Oct. 22, 2016, “Reclaiming Hope through Remembering Day.”

“No resolution or ordinance means more than what we are to do today,” Elaine Lucas, a local elected official for 25 years, told the pilgrimage audience. “Even though we don’t know all the names and we never will know all the names of the martyrs, you are remembering them, and we are remembering them. I salute you, and we salute you… This gives me real hope that we can come together and do what’s right for everyone in this country.” 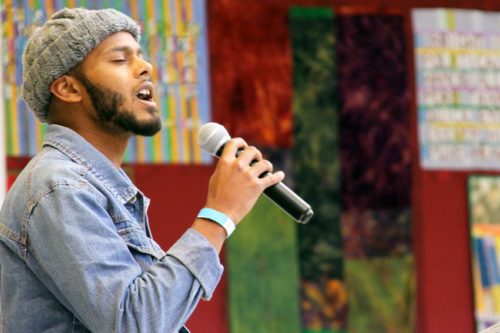 The pilgrimage continued at the nearby Tubman Museum, which focuses on African-American art, history and culture, where participants viewed historical photos of lynchings across the country, including Minnesota, Wyoming and Oklahoma. Facilitators worked with small groups to continue the dialogue before the pilgrimage ended.

“This is so important at a time in which our nation is politically and racially polarized,” said Tubman Museum Director Andy Ambrose. “We need to do this.”

For Christian clergy and lay leaders in Georgia and the South, reconciliation efforts such as the pilgrimage represent a significant historical shift.

“One great irony is that as this region was simultaneously becoming the lynching center of the United States, it was also becoming the Bible Belt,” Manis told the pilgrimage participants. “So many of those ghastly affairs were presided over by Christian clergy…. The white Christians at the time were certain that the ritual [of lynching] was a sign of their purity.”

Many of the museum’s lynching photos featured bystanders, with their expressions ranging from smiling to disinterest. Katie Capurso Ernst, program manager of the Mission Institute in Cambridge, Massachusetts, wondered if their response was any different from most Americans who view a police shooting video today.

“I don’t know in the moment if people are aware when history is being made,” said Ernst, who is helping plan a similar commemoration in the Diocese of Massachusetts. “In a thousand years, would people look back at [current] videos of police shootings, how many views they got and things still hadn’t changed?”

Others said connecting the lynching evidence in Macon to present racial violence represents a powerful call to social justice.

“We are drawing a line between lynching and police shootings. It‘s an evolution of the same intention,” said Paul Daniels II, a student at Yale’s Berkeley Divinity School in New Haven, Connecticut, and part of the delegation from Massachusetts that is seeking ways to address racism in their area. “Just as theologians connect lynching to the crucifixion of Christ. He was impoverished, with brown skin and he didn’t do what he was supposed to do.”

“This helps you think more about faith and how to use it to help others,” said James Smith, 13, of Forsyth, Georgia, who attends St. Francis Episcopal Church and came with his sister and parents. “I didn’t understand how bad it was and I need to see how it is now and how I can relate so we can fix it for the future.”

In 2017 and 2018, the Beloved Community Commission for Dismantling Racism plans to offer similar pilgrimages to other sites in Georgia. For more information, contact Catherine Meeks, kayma53@att.net.