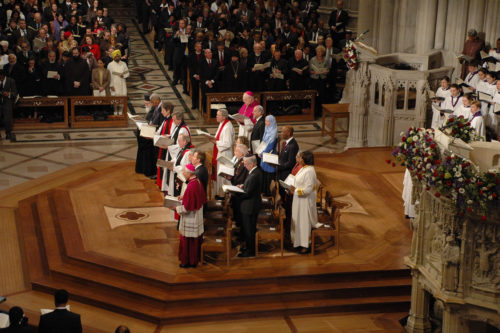 Then-Presiding Bishop Katharine Jefferts Schori, third from left in front row, joined faith leaders from around the country Jan. 21, 2009, for the Presidential Inaugural Prayer Service at Washington National Cathedral that culminated the Obama-Biden inaugural events. The service, traditionally held the day after the inauguration, will be offered again Jan. 21, 2017, for Donald Trump and his administration. Photo: Mary Frances Schjonberg/Episcopal News Service

[Episcopal News Service] Washington National Cathedral will again play out one of its traditional roles in U.S. life next month by offering Donald Trump and the nation a chance to come together in prayer.

The 58th Presidential Inaugural Prayer Service will take place Jan. 21, the day after Trump is sworn in as the country’s the 45th president. No other details have been made public.

“The cathedral is a sacred space for the nation to come together at moments of national importance, including the inauguration of our presidents,” a statement from the cathedral said. “The Inaugural Prayer Service is a moment for our next president to pause and contemplate the incredible responsibility he has been entrusted with and to listen as the faith community offers prayers for the office of the president.”

Official confirmation of the service came when a schedule of inaugural events was posted on the Presidential Inauguration Committee website. No other details were released either by the committee or the cathedral.

Beginning with President Franklin Delano Roosevelt’s first inauguration in 1933, presidential inaugural prayer services have taken place at the cathedral, which calls itself a “house of prayer for all people.” That tradition has been more recently consistent since President Ronald Reagan’s second inauguration in 1985. The exception was President Bill Clinton, who chose Metropolitan African Methodist Episcopal Church, the historic black church in downtown Washington, for both of his inaugural prayer services. Washington National Cathedral has also been the location of funeral and memorial services for nearly all the 21 U.S. presidents who have died since the cathedral’s founding.

The cathedral dean, the bishop of the Diocese of Washington and the Episcopal Church’s presiding bishop traditionally have had roles in the service. “I will be at the National Cathedral praying with [Trump] and all those who gather for the post-inauguration prayer service, which we just gathered to plan yesterday,” Washington Bishop Mariann Budde said in a Dec. 20 interview on NPR’s “The Diane Rehm Show.” The show focused on faith leaders working to unite a country divided by the presidential campaign and Trump’s election.

“I will be praying with and for the president and his new cabinet and all those – and the country,” Budde said. “All faiths will be represented, at his request, and we will pray for the good of our nation.”

The same was true in 2009 for the service at the beginning of Obama’s historic time in office. Nearly 3,200 people attended the invitation-only service, including members of the administration, Congress, the diplomatic corps, faith leaders and other invited guests.

The Washington Post reported that Trump plans to attend a private family church service at St. John’s Episcopal Church near LaFayette Square near the White House the morning of the Jan. 20 inauguration. The parish has traditionally offered that opportunity to incoming presidents.

The cathedral service will be held on a Saturday morning, during the Jewish Sabbath, when observant Jews are forbidden to drive or use electricity, among other restrictions, potentially complicating efforts to find a rabbi to participate in the service, the Associated Press noted. Ivanka Trump and her husband Jared Kushner are Orthodox Jews and would face the same Shabbat limits. The inauguration is constitutionally mandated to be held on Jan. 20, and the prayer service is usually held the next day.

Johnnie Moore, a member of Trump’s evangelical advisory board, which meets weekly, told the Associated Press that decisions about religious events related to the inauguration would be made by the president-elect’s aides, not the advisory group on which he sits. “It’s going to be reconciliatory,” said Moore, a public relations executive who leads The KAIROS Company. He said the ceremony will underscore “the president-elect’s commitment to having a presidency for all Americans.”