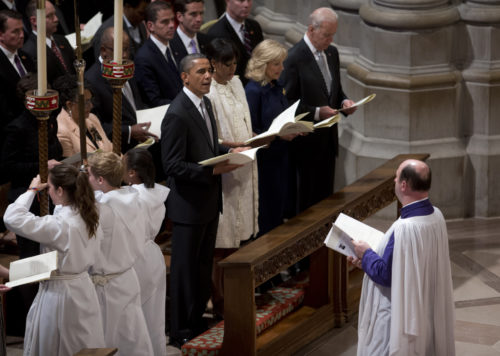 [Episcopal News Service] As is traditional for such events, the inauguration of President Barack Obama was surrounded by prayer, and Episcopal churches and Episcopalians played large roles in spiritually supporting the beginning of the president’s second term.

The 57th Presidential Inaugural Prayer Service, held Jan. 22 at Washington National Cathedral, was the official finale to the inauguration events.

Presiding Bishop Katharine Jefferts Schori offered a prayer for the nation during the service.

“Almighty God, you have given us this good land as our heritage. Make us always remember your generosity and constantly do your will,” Jefferts Schori prayed towards the end of the service. “Bless our land with honest industry and an honorable way of life. Save us from violence, discord, and confusion; from pride and arrogance, and from every evil way. Make us who come from many nations with many different languages a united people.

“Defend our liberties and give those whom we have entrusted with the authority of government the spirit of wisdom, that there might be justice and peace in our land. When times are prosperous, let our hearts be thankful, and in troubled times, do not let our trust in you fail. In your holy Name we pray.”

The Rev. Adam Hamilton, senior pastor at United Methodist Church of the Resurrection in Leawood, Kansas, was the preacher.

“We Americans say it seldom – but we should say it far more often: Thank you, for giving yourselves, for sacrificing, for living in glass houses, for accepting the constant barrage of criticism with very little praise, for being willing to risk everything in order to serve this country. Thank you. Thank you,” Hamilton said at the beginning of his nearly 17-minute sermon, addressing Obama and Biden and eliciting applause.

Hamilton said that too many Americans feel that United States is “like a house divided that cannot stand,” echoing the words of Abraham Lincoln.

He reminded the congregation about the Israelites wandering in the wilderness and complaining about Moses’ leadership. Hamilton also invoked Proverbs’ warning that “without a vision the people perish.”

They don’t literally perish, Hamilton acknowledged, they just keep bickering and can’t get anything done.

Hamilton’s sermon pled the case for the country’s leaders and all its citizens to turn to God in order to find a way out of partisan bickering. “The people in this city and in this room” are the ones who can lead that journey, he said.

“God has given you a unique gift, Mr. President,” he said. “Unlike any other president we’ve ever had, you have the ability to cast a vision and inspire people. You should’ve been a preacher.”

“God actually has you exactly where he wants you,” Hamilton added, to applause and laughter.

In order for American to have a future, its leaders and its citizens need a deep and abiding faith in God, Hamilton said, adding that faith is what sustains the hard work of unifying a country and serving those who need assistance.

“Leads us to be a compassionate people,” Hamilton implored Obama, urging him to cast a strong vision, be persistent in seeing it realized and that when he tires in his work to “wait upon the Lord, he will renew your strength.”

The interfaith service was attended by approximately 2,200 invited guests and included 23 representatives of several Christian denominations, as well as of Islam, Judaism and Sikhism.

The Very Rev. Gary Hall, dean of the cathedral, joined Diocese of Washington Bishop Mariann Edgar Budde in welcoming the congregation, in English and Spanish, to “your house.”

Filled with words and music from traditional Episcopal Church liturgies, the service also included the Sh’ma Yisrael by Cantor Mikhail Manevich of Washington Hebrew Congregation before prayers for those who govern, the Islamic Adhaan by Dr. Abdullah M. Khouj, president and imam of the Islamic Center in Washington, D.C., before prayers for those who serve and  Cathedral Cantor Allison Mondel singing an invitation to prayer by Hildegard of Bingen before the prayers for the people.

The readings included Isaiah 55:6–11, II Corinthians 4:6–10 and Matthew 5:13–16, and the congregational hymns included “For the healing of the nation,” “Come, thou fount of every blessing” and “Great is thy faithfulness.”The congregation also sang the national anthem and “America the Beautiful.”

The prayer service is a tradition dating back to the inauguration of George Washington and is considered the conclusion of the official inaugural events.

The first inauguration of George Washington in 1789 in New York City was shaped largely by a Congressional resolution that relied heavily on the English coronation ceremony, according to information on the cathedral’s website. It required that, following the oath of office in front of Federal Hall on Wall Street, the Senate and House walk a short distance to St. Paul’s Chapel on Broadway to hear “divine service” by the chaplain of Congress, Bishop Samuel Provoost. He acted in a role similar to that of the archbishop of Canterbury at English coronation services.

The round of public prayer for Obama’s second term began on Jan. 20, the day before the inauguration when the Obama family attended services at Metropolitan African Methodist Episcopal Church, one of the most historic churches in the District. In his sermon, the Rev. Ronald E. Braxton, the church’s senior pastor, used the “forward” theme of Obama’s re-election campaign in telling the story of Moses, according to the White House media report.

He urged Obama and others to not allow obstacles to interfere “where forward is the only option.”

The congregation was boisterous and the call-and-response grew in intensity during the sermon, according to the media report.

On the morning of the inauguration the Obamas, joined by Vice President Joe Biden and his wife Jill, attended a prayer service at St. John’s Church in Lafayette Square across from the White House. The Episcopal parish has hosted 11 such inauguration morning services, beginning with one for Franklin Roosevelt, the Rev. Luis Leon, the rector, told the congregation, according to the White House media report.

The interfaith and ecumenical service, that included a number of clergy, began with the choir singing “The New Colossus.” Followed by Leon’s welcome and the hymn “O God, our help in ages past,” Pastor Joel Hunter of Northland, A Church Distributed in Longwood Florida, prayed in part that God would “use this service to consecrate not only them but those they serve…”

Cynthia Hale, senior pastor at Ray of Hope Christian Church in Decatur, Georgia, read the Old Testament lesson (Joshua 1:1-9). followed by the hymn “Praise to the Lord, the almighty” and a reading of Psalm 139:1-13 by Rabbi David Saperstein of the Religious Action Center of Reform Judaism.

After the choir sang “Amazing Grace,” Cardinal Donald Wuerl, archbishop of Washington, read the gospel (Matthew 6:25-34). Then, R&B singer Ledisi sang “I feel like moving on” to very enthusiastic applause, according to the media report.

Pastor Andy Stanley from North Point Community Church in Alpharetta, Georgia, said in his sermon that Obama ought to be the “pastor in chief” and that he and others in power ought to “leverage that power for the benefit of other people in the room,” noting that the president has “an awfully big room.”

The congregation sang “Be thou my vision” and Leon then led the congregation in prayers for the nation. Bishop Vacti Mckenzie, presiding bishop of the 10th Episcopal District of the African Methodist Episcopal Church blessed Obama, Biden and their families.

Later in the day, Leon closed the inauguration ceremony with a benediction in which he prayed in part that God would endow the hearts of Obama and Biden “with wisdom and forbearance, so that peace may prevail with righteousness, justice with order, so that men and women throughout this nation can find with one another the fulfillment of our humanity.”

Leon, 63, who was born in Guantanamo, Cuba, came to the United States alone as an 11-year-old in 1961 during what is known as Operation Pedro Pan, according to a report here.