[Episcopal News Service] Presiding Bishop Michael Curry’s visit to the Episcopal Diocese of Ecuador Litoral last week was meant to show that the people hard hit by the April 16 earthquake and its aftermath are not alone.

Curry assured the congregation assembled June 30 for Eucharist at Catedral Cristo Rey (Christ the King Cathedral) in Guayaquil, the diocesan see, that he brought with him the prayers of the rest of the Episcopal Church and its pledge to walk with them through the post-earthquake period. 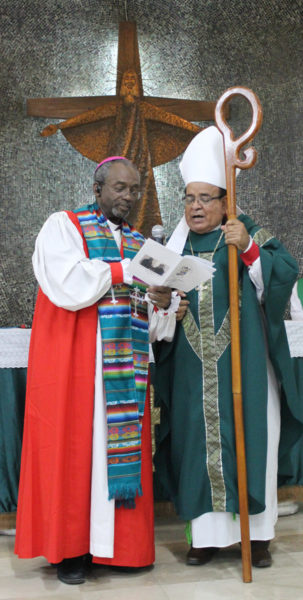 Diocesan Bishop Alfredo Morante España said Curry brought with him a message of hope for his June 27-July 1 visit to the area where a 7.8-magnitude earthquake killed 650 people and injured more than 16,600, displaced more than 30,000 people and caused billions of dollars in damage.

“The presence of the presiding bishop reaffirms the pastoral work we are doing here,” Morante said in an interview.  “And clearly this accompaniment goes beyond material resources and is also the spiritual accompaniment that we offer our communities. As a church we’ve remained united: clergy, lay people and communities. The presiding bishop’s presence inspires us to continue on, and we pray that other international churches continue to support us.”

Curry visited the Province of Manabí June 28-29 to spend time with people affected by the earthquake in the cities and towns of Manta, Portoviejo and La Pila.  On the evening of June 28 Curry gathered with others at San José Obrero (St. Joseph the Laborer) Episcopal Church in Manta to celebrate Eucharist in memory of those who died in the temblor. 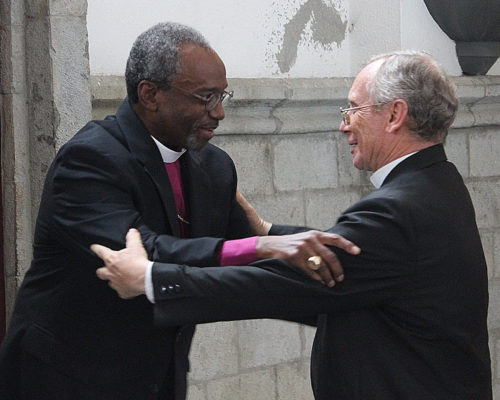 He spent the evening of June 29 and all day June 30 in Guayaquil where he met with lay and ordained Episcopalians to discuss the challenges facing the church in the 21st century. And he preached at the cathedral Eucharist.

In a video message to the rest of the Episcopal Church recorded outside the cathedral, Curry said the stories he heard throughout the diocese “have simply been remarkable.”

“We’re hoping and working so that the church can be a pastoral presence for those who are living in camps, and to be of help and assistance in various communities where homes are going to need to be rebuilt,” he said, noting that four Episcopal churches in the quake-hit area were severely damaged and must be repaired or rebuilt also.

“There’s work to do but this is a diocese, as it says in the Book of Nehemiah, where the people have a mind to work, and so it’s a joy to be here with their bishop, with their clergy and all the people to encourage this work,” Curry said.

The presiding bishop spoke surrounded by a group from Church of the Holy Trinity on the peninsula of Santa Elena on Ecuador’s coast. He noted that a women’s group at the church helps other women build community and come to know Jesus, and that a men’s group works in recovery ministry. Those activities, he said, are just a small part of the congregation’s mission.

“They go out into the neighborhoods, sharing the faith, reaching out to others and they are simply a remarkable congregation,” he said. “And if I ever had to show you an example of what the Jesus Movement is, you’re looking at it.”

Turning to the people around him, Curry said, “I am proud to be your brother in faith.”

Morante said that as they visited the areas affected by the earthquake and saw the destruction left behind Curry “could also see and evaluate the work being done by the church here in Ecuador.”

That work, the bishop said, now involves looking forward and is focused on three issues.

The first focus is the reconstruction of homes and Morante said the diocese is organizing families to provide them with materials to rebuild their own houses.

Another area of development is an entrepreneurship program. “People in shelters not only want to receive food, but also want to continue their lives, to feel useful and to work,” he said. “We are supporting these families with micro credits to help them establish small businesses.” 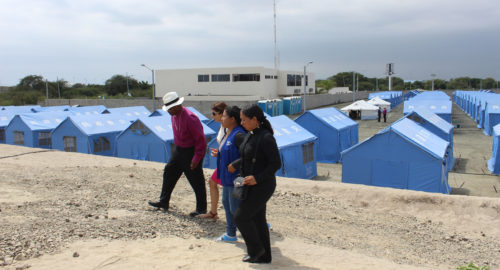 Presiding Bishop Michael Curry and others walk in the Refuge Esteros #2 camp in Manta, Ecuador, home to some of the thousands displaced by a 7.8-magnitude earthquake that struck April 16 just off the country’s coast. Photo: Edgar Giraldo

The third focus is spiritual and pastoral care, which Morante said has been vital since the tragedy.

“We’re working with very little resources, but it is a start and we offer what we have,” he said.

Morante invited people around the world to support the diocese’s work so that it can continue to help people. “The funds we have are few, but if someone also wants to support us with their knowledge as an engineer, architect, or other professional, any help is welcome,” he said.  “We also ask for prayers for these communities as they continue rebuilding their lives.”

The Rev. Jairo Chiran Quiñonez, a deacon and the vicar serving Santiago Apostol (St. James the Apostle) Episcopal Church in La Pila, a small community a 40-minute drive from Manta, told ENS that Curry’s visit “leaves a mark and gives a path forward, and we are very grateful that he came to comfort us and is willing to support us. He’s doing what Jesus preached: walking alongside communities.” 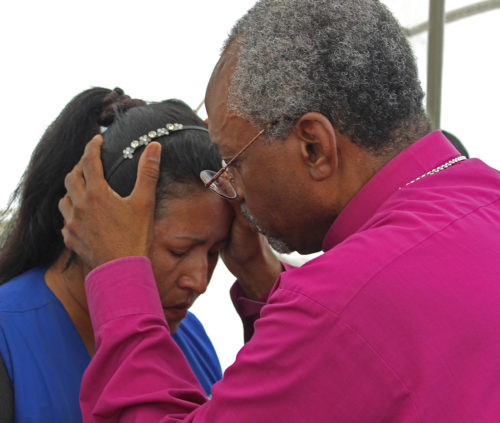 In the rural areas that were hardest hit, the poorest are suffering the most, Chiran said. “Poor people are, sadly, accustomed to losing everything, but there is a God who loves them and the church can help them get ahead.”

Chiran lost part of his own home and he said he is just one of many who face the same situation, or worse. “Personally, I take refuge in my pastoral work and my daily work as a nurse,” he said. “Starting again from zero is difficult, and you can’t help but remember everything we experienced on April 16.” 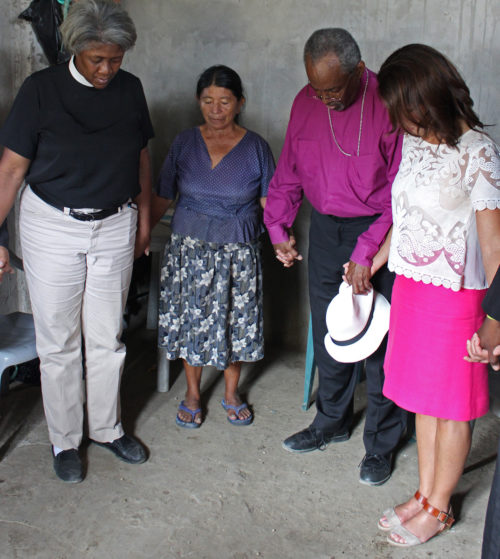 In the neighborhood of St. James the Apostle in La Pila, Presiding Bishop Michael Curry visited and prayed with several people affected by the April 16 earthquake. Photo: Edgar Giraldo

Communities are in the process of reconstruction now, demolishing what little remains. This phase last into early next year, he said. “There are so many people that need to rebuild and many that simply can’t.”

The deacon said a man recently told him he had worked a lifetime for his home but now would “have to work the rest of my life to pay the government for it again” because the government is only offering rebuilding loans of up to $10,000, not direct aid.

“Motivating ourselves to move on has been very difficult, but we know that prayers from our brothers and sisters, regardless of the congregation, have helped to encourage us,” Chiran said.  “We are beaten and worn down, but there is hope that good will still come out of this. We thank the international community for their support.”

– Clara Villatoro is a journalist based in San Salvador, El Salvador. The Rev. Mary Frances Schjonberg is an editor and reporter for the Episcopal News Service.

Editor’s note: A previous version of this story incorrectly identified the Roman Catholic archbishop with whom the presiding bishop met, had an incorrect last name for the Rev. Jairo Chiran Quiñonez, and included information about a planned meeting with the ecumenical community that did not occur.