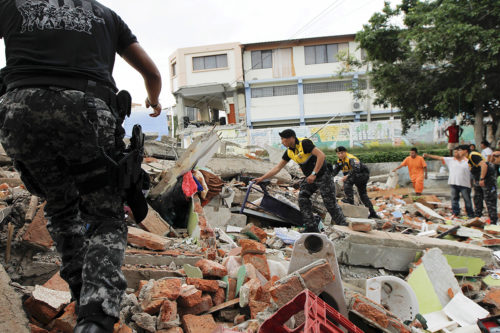 Red Cross members, military and police officers work at a collapsed area in the Tarqui neighborhood of Manta on April 17, 2016, after an earthquake struck off Ecuador’s Pacific coast. Reuters/Guillermo Granja

[Episcopal News Service] Presiding Bishop Michael Curry and Episcopalians from across the church called for prayer and solidarity with the Episcopal dioceses of Ecuador Litoral and Ecuador Central and the people of Ecuador who still are trying to assess the loss and damages caused by a devastating earthquake that struck the South American nation Saturday, April 16.

“Please know that your brothers and sisters throughout the Episcopal Church are praying for you. We will be with you during this time and in the days ahead. You are not alone. May the love of God embrace and strengthen you,” said Curry in an April 18 call to prayer for Ecuador.

By the early morning hours Sunday, April 17, calls for prayer and photographs of the damage began popping up on Episcopalians’ Facebook and other social media platforms in response to the 7.8-magnitude earthquake that killed 350 people and injured more than 2,000.

The Rev. Edgar Giraldo, a priest in the Diocese of Ecuador Litoral, posted a call for prayer and wrote on his Facebook page April 17 that many church buildings and parishioners’ homes had suffered structural damage, but that no fatalities or injuries had been reported.

The earthquake hit hardest Ecuador’s central coast, but its strength could be felt in the capital, Quito, and into neighboring countries Colombia and Peru, according to news reports. Earlier on Saturday a 7.0-magnitude earthquake hit Japan, also causing at least 40 deaths, considerable damage and a tsunami watch.

The Episcopal Church has two dioceses in Ecuador: Ecuador Litoral, which is based in the southern coastal city of Guayaquil and is led by Bishop Alfredo Morante, and Ecuador Central, led by Bishop Victor Scantlebury from Quito. The earthquake affected primarily the coast region covered by Ecuador Litoral.

“It is horrible … as if we were in a war zone … the destruction, the people missing, the wounded, the increasing number of deaths that are reported,” said Morante, adding, however, that in the midst disaster there is tremendous solidarity between churches, non-profit organizations, government agencies, as well as an outpouring of international support. “We are all one. We are united by prayer, asking for peace in these difficult times when nature has attacked. As we prepare to provide the help that is needed we ask for your prayers and your support.”

The Diocese of Ecuador Litoral has 13 clergy and approximately 29 congregations. It covers five provinces along the Pacific coast: Guayas, Manavi, Los Rios, Santa Elena and Galapagos. Morante, who spoke by telephone to the Rev. Glenda McQueen, the Episcopal Church’s partnership officer for Latin American and the Caribbean, asked that support for Ecuador be coordinated through his office and the New York-based Episcopal Church Center.

In the Diocese of Central Ecuador, mostly Quito, Cuenca and the highlands, people were very scared by the intensity of the earthquake and took to the streets for safety, but eventually returned to their homes, said Scantlebury in an email message to McQueen. He added, however, that he’s is awaiting information from the Province of Esmeralda where the diocese has a small congregation on the Pacific coast.

For the most part, the severity of the damage is in the coastal region covered by the Diocese of Ecuador Litoral. “I have spoken with Bishop Morante and offered our prayers and support. This is a very difficult time for all the people of Ecuador,” he said.

In Ambato, a town in central Ecuador, the Rev. Santiago Cordova, a deacon in serving the Diocese of Ecuador Central, opened his parish Mision El Salvador as a collection site, accepting donated water, clothing and other items for eventual delivery to the people in the most affected areas.

On April 18, Cordova and others met with local government officials on coordinating a response.

“In reality, the needs are very big,” he said via a Facebook voice message, adding that the death toll and the number of people missing continues to rise.

“We will work closely with Bishop Alfredo Morante and the Diocese of Ecuador Litoral, who will assess the needs and help us know how we can be of the most assistance and support,” he said.

The Episcopal Church in Connecticut, which has partnerships in Ecuador, also has reached out to partners in Ecuador to determine its response.