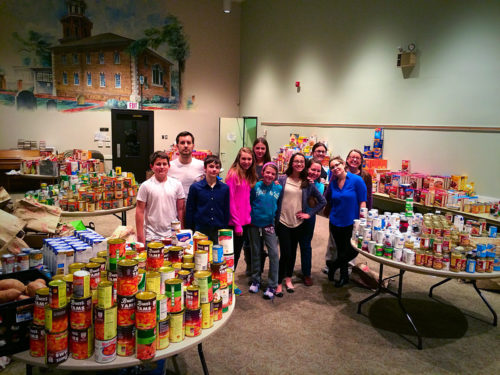 [Episcopal News Service] Whether boxing up turkey with all the trimmings or serving delicious home-cooked meals restaurant-style, Episcopal churches across the country are giving thanks this holiday season by giving to the hungry, the homeless and the lonely.

A Florida priest who received a criminal citation for feeding the homeless in a public park earlier this month says he’ll be doing just that come Thanksgiving morning.

“I will be accompanying my adult parishioners and youth group members to one of the [Southeast Florida] diocese’s outreach centers, St. Laurence Chapel, to serve Thanksgiving dinner between 11 a.m. and 2 p.m. Thanksgiving Day,” according to the Rev. Canon Mark Sims, rector of St. Mary Magdalene Church in Coral Gables.

“We will serve a traditional dinner of turkey, dressing, mashed potatoes, vegetables, drink and dessert. We will also make sandwiches and to-go meals, to be delivered to individuals who are homeless on the streets of downtown Fort Lauderdale,” said Sims, who has challenged the constitutionality of the city ordinance.

And Norman Lee, 63, says he will consider himself an honored guest at St. Peter’s Episcopal Church in Detroit where he plans to arrive bright and early for a Thanksgiving meal.

“It’s real nice, especially when you’re out on the street and no one invited you for the family dinner, and you have no money to spend for a nice meal,” added Lee, a self-described regular at the church’s five-day-a-week soup kitchen, a collaborative effort among several local congregations.

“They serve turkey dinner first thing in the morning, starting about 7:30 a.m. or 8 a.m.,” Lee said. And not just turkey but “all the fixings, cranberry sauce, dressing. They bring it to your seat. They dress up the kitchen; they decorate it and put tablecloths on the table and decorations to set the mood.”

It reminds him of holidays past, “to be able to have a real, old-fashioned dinner,” he said.

Marianne Arbogast, who manages the church’s Manna Community Meal soup kitchen, said she expects to serve between 700 and 800 meals on Thanksgiving Day with the help of hundreds of volunteers.

In Southern California, one woman’s gift of love has multiplied by the thousands.

This year, with the help of volunteers, McCurdy and her catering business partner Gayle Jensen will help organize, cook and distribute meals for several thousand people at the church and four other locations in Southern California.

When she noticed homeless and hungry people “it reminded me of when I was growing up in Vietnam,” she said. “My mother had eight children and my father died young. We were hungry all the time.”

McCurdy approached her rector about wanting to help feed local people who are homeless. She and Jensen use the parish’s kitchen and their efforts have garnered thousands of donated turkeys and other food items. The women also have organized a weekly interfaith food program that feeds hundreds.

“There are so many working poor and people alone, seniors, and people are hungry year-round,” Jensen said.

In Ohio and Virginia: Boxing up holiday delights
Jill Burket Ragase’s 6-year-old twins, Pippa and Truman, and even her 18-month-old twins, Penelope and Quentin, are “Thanksgiving box experts now.”

And Ragase, volunteer coordinator for Cincinnati’s Episcopal Church of the Redeemer’s Thanksgiving outreach program, says she thinks they may even understand a little bit about food scarcity because they’ve rubbed elbows with those experiencing it.

Sharing a family ministry while helping others is a reason she agreed to lead Redeemer’s program this year, said Ragase. She and other volunteers recently divvied up an estimated 940 sticks of butter, 2,820 extra large eggs and enough 5-pound bags of potatoes to fill 250 boxes with turkey and all the ingredients for a Thanksgiving meal for local working poor residents.

“We are so blessed,” said Ragase. “A local grocery store offers the turkeys at 99 cents a pound and gives us 10 percent off the rest of the perishable items. So, I got to go and order those this week.”

According to Sharon Jenkins, Redeemer’s communications director, the parish has partnered for several years with the Madisonville Education and Assistance Center (MEAC) and negotiates with the grocery store “to get the turkeys at a reduced rate, and we include eggs, potatoes, and all the makings for a big meal.”

After donated bundles of corrugated boxes arrive, parishioners sign up in October to commit to fill at least one. “Some take as many as three boxes,” increasing this year’s total from the 225 filled in 2013, Ragase said.

Parishioners “include a $15 donation toward the cost of the turkeys” and the boxes come with a shopping list for nonperishable items such as macaroni shells, mashed potatoes, stuffing mix, pie filling and pie crust mixes. The boxes are filled and then “this week is the best part” because the turkeys arrive, Ragase said Nov. 21.

On Nov. 22, volunteers arrived in shifts, some to pick up turkeys and other perishables from the local grocery store, others to deliver the boxes to MEAC’s food pantry for a Nov. 23 distribution.

Similarly, members of Historic Christ Church in Alexandria, Virginia, helped fill boxes with turkey and all the trimmings for 150 local families to make a complete Thanksgiving meal, according to development director Tara Knox.

“The families are Alexandrians who have requested assistance from the church’s Lazarus Outreach Ministry which serves local people in need,” according to Knox.

On Nov. 23, youth in grades six to 12 helped set up for the food distribution by converting part of the parish hall into a Thanksgiving food pantry, she said. They receive donated turkeys and canned goods.

When those who’ve requested assistance arrive, a personal shopper accompanies them through the pantry, Knox said.

“It’s a nice opportunity to have their family meal cooked in their own home,” she said. “And it’s really fun for us because everybody can get in on the act and the kids get to set up the food pantry. It’s kind of fancy, and the Sunday school kids put together treats and inspirational messages to go with the bags.”