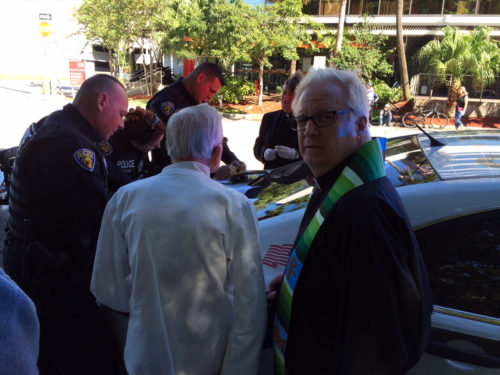 The Rev. Canon Mark H. Sims (wearing a stole), rector of St. Mary Magdalene Episcopal Church in Coral Springs, is issued with a criminal citation for feeding the homeless.

[Episcopal News Service] A Florida priest who was issued a criminal citation for feeding homeless residents in a local park is fighting back.

“I am suing the city of Fort Lauderdale for the right to continue to feed the homeless on city streets,” according to the Rev. Canon Mark H. Sims, rector of St. Mary Magdalene Episcopal Church in Coral Springs.

Sims told the Episcopal News Service Nov. 13 that he has hired local attorneys Bill Scherer, a well-known trial lawyer, and Bruce Rogow, a constitutional lawyer who teaches at Nova Southeastern University, to defend him “in court against a criminal citation I was issued.

“I want to fight the constitutionality of the ordinance that was passed. As someone issued a citation I have standing and I’m going to use that opportunity.”

Scherer told the Fort Lauderdale Sun-Sentinel that the city ordinance, passed Oct. 31, which bans feeding of homeless in public places, is unconstitutional and discriminatory. 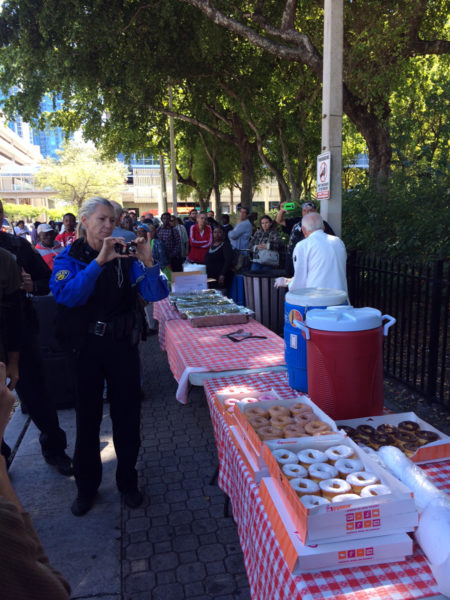 Police arrive at Stranahan Park where Sims and others were feeding homeless residents.

Local law enforcement officials halted Sims and two others from feeding homeless residents in Stranahan Park on Nov. 2. Sims, 57, said he was detained by police, fingerprinted, issued the citation and released. He is awaiting a court appearance date and faces a $500 fine and a possible 60 days in jail.

“If I get sentenced to jail, I’m going to jail,” Sims said. “But, I’m willing to stay there [in jail] for the right to compassionately feed people who are living on the street,” he added.

City officials have said they want feeding programs moved indoors but Sims and others say there are simply not enough locations to accommodate growing numbers of homeless families and individuals.

“I am determined to allow people to be able to compassionately feed the homeless and people who are hungry on the streets of Florida. I don’t see how we can pass an ordinance that restricts human decency,” added Sims, who has created a legal defense fund on “gofundme.com” and expects “a tough challenge in court.”

He vowed to continue to feed homeless people and on Nov. 12 joined others doing just that at a local beach.

“The Episcopal Church in this diocese feeds people every single day through one of several agencies,” Sims said. “We have on-site places that we use and there are so many social service agencies we have created in Southeastern Florida to help families and individuals as much as we can, but there are still not enough.”

As chair of the board of the Episcopal Charities of Southeastern Florida “we just funded for a two-year cycle $600,000 worth of grants to parishes with at least half of that going to programs that are caring for the feeding of hungry people, homeless people and the elderly,” Sims said.

Typically, during winter months families and individuals who are homeless migrate to Florida from colder climates, so there has been a noticeable uptick in their numbers locally, he said.

On Sunday, Nov. 9, members of his parish returned to the park and served a hot meal of sautéed chicken, rice, vegetables and dessert and distributed “takeout bags of peanut butter and jelly sandwiches and apples. We saw more women than we normally see. It was a bit surprising and a bit sad,” Sims said.

But he added that “the city wants them off the streets. They don’t want to do anything to encourage them to be able to stay on the streets. The problem is, there’s no place else to go. They want to make it someone else’s problem.”

Feeding people who are homeless is nothing new for Sims, who said “this has been going on since I was in seminary in 1999 and before that when I was a parishioner in South Florida. I’ve been doing this for 20 years.”

His goal, he said, is for city officials to rescind the ordinance “and I want to sit down with a clean slate and help rework it.”

The area has “seen an amazing increase in homelessness and hunger needs,” Dambrot added. “When Fort Lauderdale adopted this ordinance there was already feeding going on in the streets. We’ve gotten … requests for additional funding because the need is so great and food pantries have run out of food and their access to government sources of food is not available.”

She said ECSF “serves hundreds of thousands of meals a year” through partner agencies and that she has noticed at least a 10 percent increase recently in numbers of meals served.

The issue of homelessness is complex and layered, she added. “We have people come out of the woods and the mangroves in the [Florida] Keys; there are homeless folks living in encampments. In Pompano Beach, they’re sleeping under the highway. We even have some people living in canoes in the water, who come ashore to food pantries in Key West.”

There are levels of homelessness, including those who are temporarily without housing who receive job skills and employment training and eventually find permanent living arrangements.

“There is also that layer of folks we serve at St. Lawrence Chapel and our Jubilee Center in South Broward, that will be chronically homeless,” she said. “It’s an ongoing challenge and we’ll be in this for a long time.”

Yet, she added that Sims’ advocacy has inspired others “to take those steps necessary to change what we perceive as unjust regulations.” Sims, the agency and the church community are all simply attempting to respond to Jesus’ directives to help others.

“We follow Matthew 25,” which emphasizes Jesus’s call to serve those in need, she said. “That is our road map. That is our intentional vocational mission.”