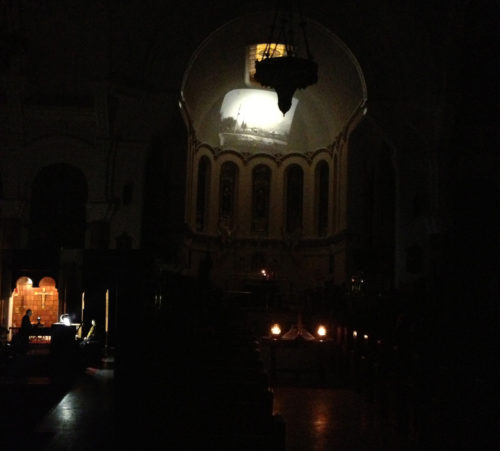 Images were projected onto the domed ceiling of the Episcopal Church of St. Luke and St. Matthew in Brooklyn, N.Y., during the second of three experimental liturgies during Wednesdays in Advent. Photo: Joe Budenholzer

[Episcopal News Service] Around 5:30 this evening, a handful of musicians, a film projectionist, clergy and maybe a dancer will arrive at the Episcopal Church of St. Luke and St. Matthew in the Clinton Hill section of Brooklyn, N.Y., to pool their talents and hope the Holy Spirit inspires the Eucharist they will lead an hour later.

The service is the last in a series of three experimental liturgies for Advent on the theme “Divine Invasion,” a title taken from a 1960s science fiction work written by Episcopalian Philip Dick. “It’s sort of like the nativity story from outer space,” explained Joe Budenholzer, a parishioner who initiated the liturgies and  composed the music for them.

“It presents something both familiar and other-worldly,” said the Rev. Michael Sniffen, the parish’s rector. “We think that’s part of the spirituality of Advent, that Christ is coming and Christ is known to us in a certain way and yet remains completely unknown and completely unrecognizable to us in other ways.”

“We often focus on our preparation,” he said. “We thought it was a helpful corrective to also focus on God’s action in Advent: Ready or not, here God comes. That’s not to take the focus off preparation, but to remind us of God’s active participation.”

The services have been held in the large, darkened nave. Just a lantern and reflections from film projections on a screen provided light the first week, a bit more light and images projected onto the dome above the main altar for the second. Tonight will feature more light still – but not the full light of the world come into the world at Christmas, Budenholzer said. “This is going to be the light at the end of the tunnel.”

The accompaniment to the sung Eucharist has grown from a synthesizer making “sort of scary” ambient sounds and bassoon and atonal organ music to a composition tonight in a minor key that adds a drum duo called the Dream Lovers.

“I write a different score each week,” Budenholzer said. “We pull it all together in the moment. … We’re still putting it together, and that’s part of the experimental liturgy, is that we’re prepared to fail.”

“It’s really been the most memorable Advent I’ve had,” he said. “The Holy Spirit has definitely been there.”

“It’s been a real success, liturgically and aesthetically. It’s had pretty good turnout; it’s been growing each week,” Budenholzer said. “We’ve liked it so much, we’re talking about maybe doing something similar for Lent.”

Such artistic experimentation and expression is part of the ethos of St. Luke and St. Matthew, where other community-art collaborations include hosting a dance company as artists in residence and the creation of a mural depicting church and community history. The church itself is a designated historic landmark, recently rededicated after undergoing renovations to repair damage from a fire set just before Christmas 2012.

The parish has a strong outreach focus, having served as a major distribution hub for relief supplies after Superstorm Sandy. Sniffen supported Occupy Wall Street participants when the movement began and was arrested during a protest in December 2011.

The arts initiatives are another piece of the outreach mosaic.

“My model of leadership is very much a partnership model,” Sniffen said, “and the congregation here, myself included, has been very much strengthened by coming together with other communities across the borough and the city who all have common mission goals. It really expanded our vision of what’s possible.”

With the arts collaborations in particular, “part of it was my desire to help the church reclaim its role as patron of the arts in urban areas,” he said. “I both wanted to gain inspiration from local artists and also do what we could to support interaction between the faith community and artist communities.”

One immediate way to connect was to offer some of the church’s unused space to artists at a reasonable cost in exchange for a certain number of weekly hours of community programming. “What’s come out of that is that we collaborate even more than we anticipated,” Sniffen said. 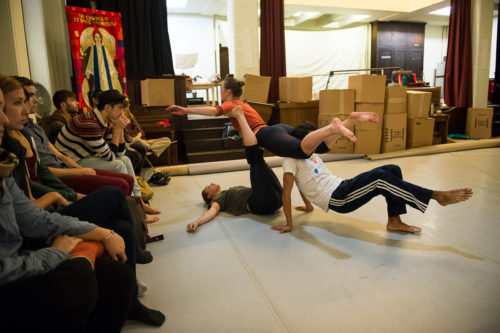 Contemporary dance company Gallim Dance, artists in resident at the Episcopal Church of St. Luke and St. Matthew in Brooklyn, N.Y., welcome parishioners and community members to attend free open rehearsals in the parish hall as part of their collaborative arts program with the church. Photo: Christopher Duggan

The New York Landmarks Association played matchmaker to bring Gallim Dance to the church as artists in residence.

“Many contemporary dance companies do not have full-time rehearsal space,” said Meredith Max Hodges, Gallim executive director. “They rent different spaces all over Manhattan and Brooklyn and kind of wander from place to place. We really wanted the permanence and the freedom that a permanent home would provide.”

The troupe’s artistic director and Sniffen met and “just found a tremendous amount of common ground about their vision for what a dance company in permanent residence could provide for the community above and beyond what is happening in that space,” she said.

Gallim moved into a large parish hall with a “huge cathedral ceiling” in February 2012 and launched its year-round community and education programming seven months later. “We have turned this into an extremely active space,” Hodges said. “We rehearse there full time five days a week, and our office is there, but now what we’re offering is just a huge array of free and low-cost programs for the community.”

They offer dance classes – including Afro-Caribbean dance classes with drums – and yoga and movement classes for dancers at all levels and free opportunities to watch the company rehearse. “We’re really going for that sense of openness and intimacy and sharing our work with our local community.”

The recently installed community mural at the church marked a collaboration led by Stefanie Siegel, executive director of Bailey’s Café – an intergenerational arts organization – and former teacher at Paul Robeson High School, now in the process of closing.

Originally, a mural depicting the school’s history was planned for two classrooms within the school building. “The idea was to have everyone who’d ever been engaged with the school come in and work on the mural and have it sort of be this journey of the school represented,” Siegel said.

When efforts to keep the school open – and to create the mural in a part of the school that would be open to the public – failed, the project relocated to St. Luke and St. Matthew. And the vision of the mural expanded. “Moving it here,” Siegel said, “we were very aware that it couldn’t just be about the school anymore, because it was in a different community, and the church community had its own struggles around different issues.”

A girls group from the café interviewed some of the church’s “elders” to hear the congregation’s stories. School alumni provided quotations and a poem. Portrait artist Sophia Dawson led the creation of the mural on parachute cloth, a method that allows mural painting without having to be outside working directly on a wall.

Said Sniffen,“The mural tells the story of the struggles for liberation, both in Paul Robeson School and the Church of St. Luke and St. Matthew and in the community more broadly. At the center of the mural is a depiction of the rose window which is above the entrance of the church.”

In place of panes of stained glass are representations of the communities’ narratives, including fire trucks fighting the December 2012 blaze at the church, he said.

She sees growth at the church, fostered by its openness to artistic collaborations. “I think [Sniffen’s] mission has been to really open the church up to community and to the arts and to see the arts as a healing force and also a spiritual force and a way to build the community,” she said. “They see themselves as sort of a resource in the community that that goes way beyond specific institutionalized religious belief. I think also that they recognized as people of the faith that this is sort of the way religious institutions almost have to go, because otherwise it’s so narrow and isolating to people.”

At St. Luke and St. Matthew, she said, they are “opening themselves up to be a space that is welcoming.”

“I imagine we’ll continue to work with the church,” she said. “We really like the space and enjoy the community that is there and really feel welcome there. It’s been a really positive experience all around.”