[Episcopal News Service] “This was the church at its best.”

The words surfaced again and again as Episcopalians described how their churches became distribution centers for relief supplies and sanctuaries of warmth and food in the wake of Hurricane Sandy, which slammed the Northeast on Oct. 29. The storm swept away or flooded homes along the coasts of New Jersey and New York, disrupted transportation and telephone services across the region and left millions of households without electricity and heat, and in some cases water, throughout multiple dioceses.

Churches responded by opening their doors as warming, charging and feeding stations; collecting and distributing emergency supplies and meals; and dispatching volunteers to visit and inventory the needs of those most affected by the storm. In the process, their clergy reported, the churches offered new opportunities for service and built community within and beyond their walls.

“The community-building is amazing,” said the Rev. Michael Sniffen, rector of the Episcopal Church of St. Luke and St. Matthew in Brooklyn, New York, in the Diocese of Long Island. “A lot of the volunteers have been coming back day after day, so we’re all getting to know one another.” 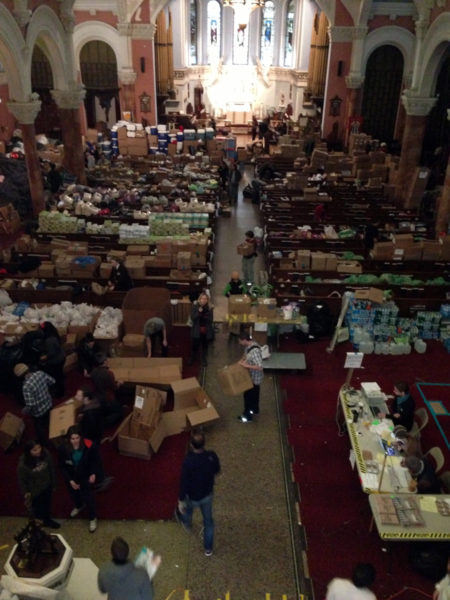 The Episcopal Church of St. Luke and St. Matthew in Brooklyn, New York, serves as a “holy warehouse” for Hurricane Sandy relief supplies. Each day, the church is filled with and then emptied of donations distributed to storm victims. More than 20,000 volunteers have helped with the effort, which has received hundreds of thousands of dollars worth of donations. Photo/Michael Sniffen

St. Luke and St. Matthew opened its buildings, including the church itself, to relief efforts, particularly Occupy Sandy, which harnessed the organization and volunteer power of Occupy Wall Street. Along with a slightly smaller operation at St. Jacobi Evangelical Lutheran Church in Sunset Park, the parish became “basically the major drop-off and distribution hub and volunteer-training hub for Brooklyn,” Sniffen told ENS.

By Nov. 12, more than 20,000 volunteers and hundreds of thousands of dollars worth of donations had come through the church’s doors. “We have six to nine full UPS trucks that come and drop off [donations] at the church every day,” Sniffen said.

Volunteers canvas storm-affected neighborhoods, determine what’s needed, then distribute the relief supplies that have been sorted and organized in the church’s pews. To solicit the specific donations needed, Occupy Sandy uses an Amazon wedding registry. A kitchen crew provides 5,000 to 8,000 hot meals a day. 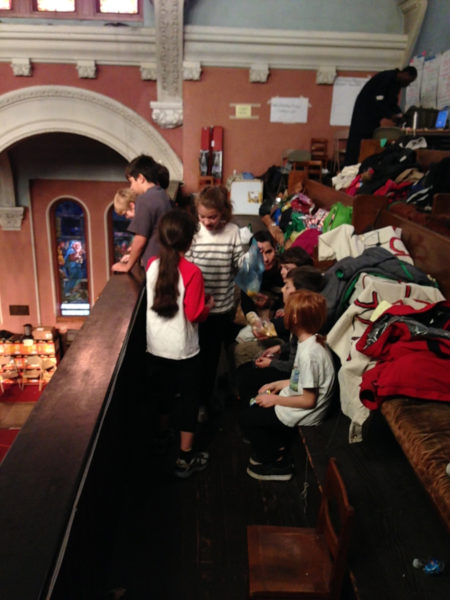 New-volunteer orientation happens every 15 minutes. Volunteers of all ages participate, including students from Public School 29 who spent their Veterans Day holiday running the “coat check” in the church balcony.

One volunteer told Sniffen she hadn’t attended church in more than a decade. “This renews my faith in what the church can be,” she said.

An electrician from Milwaukee, in town to babysit his grandchildren for a few days, helped install a generator at a church without electricity, explaining, “I thought I could be useful.”

Another man, visiting New York from Barcelona, Spain, spent a day sorting donations at the church.

“Those are just three stories. It’s an image of human community,” Sniffen said, noting that volunteers come “from every religious background, and none.”

“I think the fact that this effort is housed in a church speaks for itself,” he said. “What’s amazing is the number of volunteers who come up to me and say, ‘Thank you so much for opening up this church.’ … I just keep telling folks: This is what the church is for.” 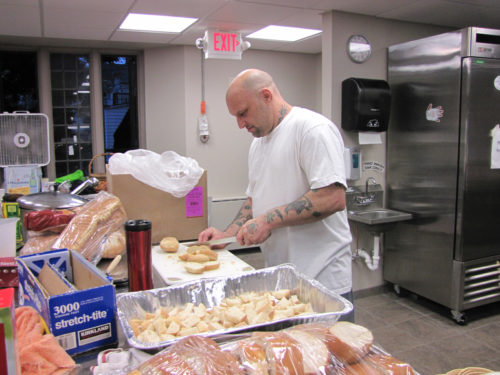 Members of a wide variety of churches and other community groups helped prepare meals at St. Peter’s Episcopal Church in Morristown, New Jersey, for the 10 days it served as a post-Sandy warming, charging and feeding station. On the last night, dinner was prepared by members of Market Street Mission, a nondenominational organization that offers a residential recovery program for men as well as emergency services for the community’s needy. Photo/Sharon Sheridan

At St. Peter’s Episcopal Church in Morristown, New Jersey, which served more than 3,000 meals over 10 days to people left without electricity after the storm, cooking allowed people of many backgrounds from the wider community to work together for a common purpose, noted the Rev. Janet Broderick, rector.

“It was possible for people of so many different minds, of theologies and thoughts about God, to just work side by side,” she said. “It brought out the best in folks.”

Besides hosting meals, the parish hall served as a warming and charging station each day. At the tables, one could find a homeless person, used to living “on the edge,” holding a discussion “with someone who is probably a multi-millionaire with no [electricity],” said the Rev. Melissa Hall, assistant rector. “We had the Antioch table here.” 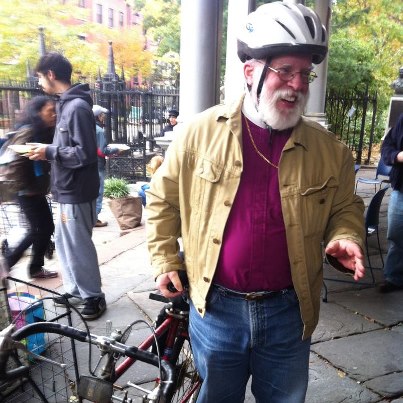 When Hurricane Sandy disrupted mass transit and telephone service in New York, Diocese of New York Bishop Coadjutor Andrew Dietsche rode his bicycle from the Cathedral of St. John the Divine to lower Manhattan to check on parishes he had been unable to reach. Photo/Tomas Reimer

Churches are perfectly poised to help in a disaster like this, said Diocese of New York Bishop Coadjutor Andrew Dietsche.

“A lot of other agencies sort of show up from outside when disasters happen, and usually show up with more resources. But what we have is places on the ground … and already-existing ties to the community,” he said. “Especially in the Episcopal Church, we don’t tend to be a mega-church model. We’re a parish model. We have a church in every community, and we’re community-based. We know the people. We have those networks.

“It’s practical, but it’s also completely consistent in the gospel call that we follow as well: to love our neighbors.”

Congregations throughout the 200-church diocese have been following that call since the hurricane hit.

Among those churches, St. Mark’s Episcopal Church in-the-Bowery served as a major relief-distribution center. North of the city, St. Stephen’s in Pearl River in Rockland County and St. Peter’s in Peekskill in Westchester County served a similar role in areas that escaped flooding but suffered massive power outages, he said.

While the storm damaged some churches, “generally the damage was moderate, and it’s all fixable,” and none prevented them from holding worship services, he said. The worst-hit area in the diocese was Staten Island, where some parishioners lost homes. In one case, a mother and daughter both had their homes condemned because of storm damage.

“I’m not quite sure yet what we will be able to do for people whose whole homes are gone,” Dietsche said. “We have to sort of assess what role we can play.”

As the need transitions from immediate emergency relief to longer-term rebuilding, Dietsche said he anticipated one of the diocese’s best resources for developing strategies to meet that need would be its new disaster response coordinator, the Rev. Stephen Harding. “He has brought great leadership to this.”

The areas of the diocese severely damaged by the storm are on a smaller scale than in the surrounding dioceses of New Jersey, Newark and Long Island, Dietsche noted. He’d like to see networks develop across the dioceses to move forward in the rebuilding state, although he doesn’t know what shape that will take yet, he said.

In the Diocese of New Jersey, the hurricane left nine clergy as well as some parishioners homeless, said the Rev. Francis Hubbard, interim rector at Christ Episcopal Church in New Brunswick. The parish has served as a regional depot for area churches sending supplies to the hard-hit Jersey Shore. It also geared up for a larger-than-average distribution of supplies at its regular local food pantry.

The storm knocked out the church’s telephone, and Hubbard’s cell service was spotty for several days. Once his cell phone was working properly, “I went through the parish directly and started making phone calls to everybody who had been hospitalized in the last year and any elderly people, if I could reach them.”

Some people he reached had no power or heat, but downed power lines and trees made reaching them difficult. He began searching for other parishioners who lived nearby who could help, and “a lot of people started reaching out themselves to people that they knew,” Hubbard said, adding that he thinks this strengthened the bonds among members.

“I think that this can build community, and I think it also tells you how much we need community. There’s a great sin of over-individualism in America, that we’re tough and everybody can make it on their own, and that’s bogus,” he said. “Jesus didn’t say, ‘Believe in me and never hang out with anyone else who does.’ It’s interdependence, not dependence.”

In the Diocese of Newark, St. Luke’s Episcopal Church in Montclair stayed open as a warming and charging station 12 hours a day for two weeks and now employs an “eat, pray, love” strategy for its post-Sandy efforts: getting nonperishable foods to storm victims in Hoboken or through Occupy Sandy; praying for those traumatized by the storm; and loving through giving, encouraging donations to Episcopal Relief and Development, said the Rev. John Mennell, rector.

“It was an amazing couple of weeks of ministry,” he said. “It was just so wonderful to see people that giving and that open. I always think that when tragedy and stuff like this strikes, God finds some way to show us God’s best.”

“The folks that came in were incredibly grateful,” he said, adding, “Some of the folks were among 19 visitors at church on Sunday.”

Through watching the community come together in service, Broderick discovered something about what draws people to God and the church.

“I always thought that if people could understand that God loves them exactly as they are, then they would find church irresistible and the church would grow, lots of people would come. And I’m disappointed that that doesn’t always work,” she said. “I discovered from this … people need an opportunity to give themselves to serve.”

“It’s an aspect of worship … giving oneself in a real and serious sacrificial way,” she said. “It’s really an aspect of being crucified with Christ. That’s really what we’re talking about … being a person who gives selflessly as Christ did. I think people need that experience in order to connect with the church in a real way. I think that’s what I noticed that I have not provided for in my ministry as much as I really want to provide for it now.”

Said Dietsche, “The kind of relief work that we do … is very much the work of the gospel … a fulfillment of our commitment to live life as disciples.”

And it changes people’s perception of the church, Hall said, from something “ancient and archaic” to one “really relevant and able to stand in a modern world in an important way with a very simple message, which is: The table is for everyone; everyone is welcome.”

“I think it was eye-opening for people to see it in action,” she said. “To me, that was the most amazing piece, in that people who don’t believe in God, who don’t believe in organized religion, who call themselves spiritual but not religious – that all of a sudden they realized that … the church is a way to connect in a loving and inclusive and important manner with something bigger than ourselves.

“I think what happened was that people experienced grace,” she said. “I’m very proud of my church.”