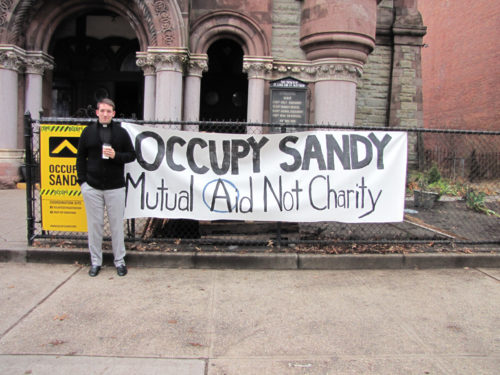 The Rev. Michael Sniffen stands outside the Episcopal Church of St. Luke and St. Matthew in Brooklyn, New York, a major distribution hub for hurricane-relief efforts, during a break between Sunday services on Dec. 9. Photo/Sharon Sheridan

[Episcopal News Service] More than 100 firefighters battled an early-morning blaze at a Brooklyn church that has served as a major distribution hub for relief services in New York following the devastation of Hurricane Sandy.

“A fire started just after 4 o’clock in the morning [Dec. 23],” the Rev. Michael Sniffen, rector of the Episcopal Church of St. Luke and St. Matthew in the Clinton Hill section of Brooklyn, New York, told ENS. “It appears to be arson. It was started outside the church, like on the steps of the church.”

They don’t yet know the extent of the damage, he said during a 10 a.m. telephone interview. While the immediate burn damage appears to be contained to the narthex, they don’t know the extent of water and smoke damage elsewhere. “We have not been able to enter the building yet.”

The congregation planned to hold its 11 a.m. Advent 4 service at Brown Memorial Church, a Baptist church located around the corner. They don’t know yet about Christmas services, Sniffen said. “It’s going to depend on whether or not they can restore power to the building.” 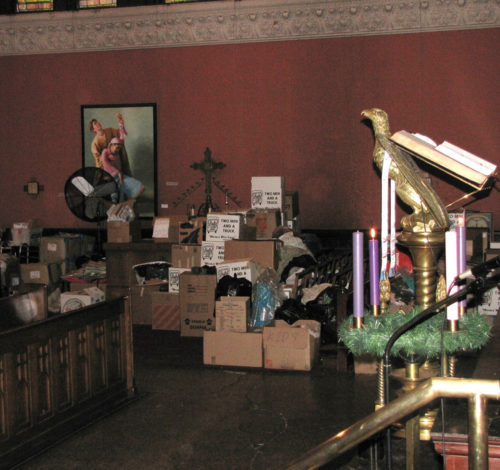 Boxes of donated relief supplies lined the sides of the sanctuary of the Episcopal Church of St. Luke and St. Matthew in Brooklyn, New York, on Dec. 9. The church has been a relief hub for Hurricane Sandy donations, which are sorted and organized in the church and then sent where needed elsewhere in New York. A fire damaged the church on Dec. 23, but the extent of damage to the building and the relief supplies is still unknown. Photo/Sharon Sheridan

In the weeks after Hurricane Sandy, the church has provided a hub for Occupy Sandy, a grassroots relief effort spearheaded by members of the Occupy Movement. By Nov. 12, more than 20,000 volunteers had been trained and deployed, and hundreds of thousands of dollars worth of donations had been received and processed.

Sniffen supported the Occupy Wall Street participants when the movement began with the occupation of Zuccotti Park in Manhattan. He was arrested along with George Packard, former Episcopal bishop suffragan for armed services and federal ministries, the Rev. John Merz, also of Brooklyn, and the Rev. Earl Kooperkamp, then rector of a Harlem church, during a protest in December 2011.

Sniffen said he didn’t know whether the suspected arson related to the church’s Occupy Sandy work. “I don’t think there’s any connection, but there’s really no way to know at this point.”

“Thank God we had two volunteers in the building who have been doing security for us,” he added. “If they hadn’t smelled the smoke, the fire could have consumed the whole church. It’s not like anybody was around to see it.”

“This church burned twice and came back stronger each time, so we’re undeterred,” Sniffen said. “It’s obviously very sad to have a fire in your church two days before Christmas, but Jesus had no home so … [He’s] got a home in our hearts.”