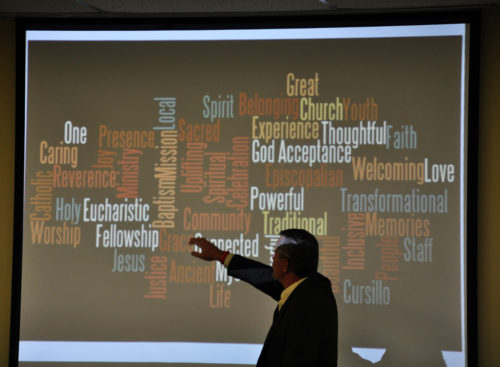 The Ven. Robert Franken, a member of the Task Force for Re-imagining the Episcopal Church, shows the group a Wordle based on responses to the first question of the task force’s engagement process with the church. The question asks for Episcopalians to reflect on their experience of the church, choose their “very best memory” and express it in three words. Photo: Mary Frances Schjonberg, Episcopal News Service

[Episcopal News Service – Linthicum Heights, Maryland] By this time next year, the members of the Episcopal Church will have just recently learned what changes and plans the Task Force for Re-imagining the Episcopal Church will recommend to the General Convention. However, between now and then, much work remains for the 26-member group, including what more than one member said is the need to connect specific proposals for change to a bold vision of what the churchwide structures can be and do.

Katy George, who shares the work on convening the task force with the Rev. Craig Loya, told the group at the beginning of its Dec. 6-7 meeting here at the Maritime Institute, outside of Baltimore, that many task force members have expressed the feeling that “we’d like to step it up and really make sure that we are producing something fantastic.”

George told the group that she thinks it will be important for the task force to not just list its recommendations in its final report but to explain to the church “our holistic vision for how we’re hoping that the church moves in a new direction as a networked facilitator actually, as opposed to a corporation.”

And, she said, the group must be able to “really bring to life to the church how [the group’s proposals] will change how we spend our resources, how we spend our time, how we make decisions, we work together on mission.”

Council member Tom Little seemed to anticipate the path of discussion for the rest of the morning session when he suggested that as the group considers specific proposals “we may end up tweaking the vision.”

Engaging with the engagement process

The members spent most of the Dec. 6 morning session, which was open to the public, discussing what they have heard from its “church engagement process” thus far. The group developed an “engagement kit,” which was posted on its website in mid-October.

The kit is meant for use at any local, diocesan, or churchwide gathering and anyone can lead the discussions it prompts and report the results to the task force. There is also an opportunity for online engagement, which is a series of four questions.

The kit is meant to help the task force hear from Episcopalians about “the memories, hopes and dreams” that they have for the church, according to the group’s website. The deadline for submitting information is March 14.

Nearly 190 groups and individuals have responded to the four online questions, sometimes with lengthy comments. All of those comments are posted just below the explanation of the engagement kit at the link above. More responses have come to the task force via other methods, putting the total number of responses somewhere between 260 and 280, according to the Ven. Robert Franken, who along with the Rev. Leng Lim, led the task force through a lengthy multi-part discussion of the responses received thus far.

The task force needs more input, Franken said, because the response to date “gives us a picture but it doesn’t yet give us the whole picture, and we want to make sure that the picture we’re getting is the right picture.”

Few of the task force members have answered the four online questions, according to a show of hands. And not all who have facilitated groups who used the engagement kit have supplied the results to the task force, Franken said.

Yet, many task force members who have used the engagement kit with groups reported having profound experiences.

When Diocese of Northwestern Pennsylvania Bishop Sean Rowe used the process during a diocesan convention, “I couldn’t get people to stop talking,” he said.

The Rev. Kevin Nichols said he began using the engagement kit in his congregation, including with the confirmation class. “Every group was trying to go deeper spiritually by using the images that were presented,” he said. “I worried at first that maybe it was a little be too simplistic – that our questions weren’t grand enough – but with each group I felt like it went to a depth that I didn’t even imagine.” 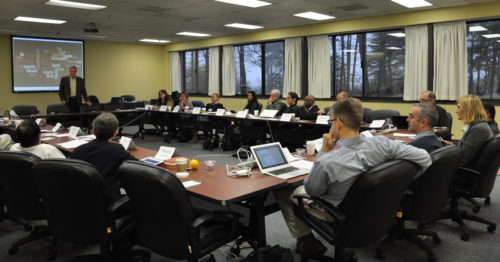 Members of the Task Force for Re-imagining the Episcopal Church begin Dec. 6 to study input from the church at the beginning or their two-day meeting at the Maritime Institute in Linthicum Heights, Maryland. Photo: Mary Frances Schjonberg, Episcopal News Service

During the Dec. 6 session, the members found some suggested ways of changing the churchwide structures as they considered some of the verbatim comments as well as summaries of all the input the task force has received. They also heard some general and specific suggestions from each other.

Those proposals were presented to them as “teaser,” in Leng’s words, rather than formal proposals.

“As a church predisposed to legislation, when someone says something, we think ‘Oh, my gosh, am I on board on this or not; is this a recommendation I can support?’ [and] then we go down the track of voting,” he cautioned. “We actually putting out ideas for you to test, to try on; we’re not asking you to buy, we’re really asking you to rent …we are trusting that something is going to unfold.”

Joan Delano, a consultant to the task force who works with the ClearLake Group as does Leng, summarized the input received thus far and she noted “a powerful sense of the importance of the liturgy, ritual, tradition and history” in the comments. “The strength of the mysticism theme was intriguing,” she added.

One question in the process asks “what do you think is the one thing The Church should hold on to and the one thing it could let go?” Delano, who was ill and could not be at the meeting, reported that the “hold on to” responses “were overwhelming about the spiritual side” of the Episcopal Church and the “let go” responses “were overwhelming about administration and governance.”

“The respondents overwhelmingly want to cut the bureaucracy and the administrative burden,” she wrote. “My reflection is that being in control consumes a lot of resources, and that people sense how much resource could be freed up if TEC invested less in governance and administration.”

While Delano reported finding few comments from people with an “obvious ax to grind,” the Rev. Marianne Ell said her small group of task force members sensed “some real hatefulness, and passive-aggressiveness and taking a shot at things” in some of the answers to the let-go question.

George told the group that her experience with the task force has caused her to come to “a very different framing of the problem” facing the church. She came onto the task force, she said, believing that the church’s process was “way too big – expensive, big, unwieldy – and that as forcing our ‘product,’ our mission to be way too small.”

In fact, she said, very little money overall is spent on governance and administration and “actually all the mission is being done elsewhere.”

“So, what I see is that we have a small process and we’re cranking out too little product with it because we’re not engaging and empowering the whole church,” she said. “So, our job is not about ‘let’s cut down process;’ it’s ‘let’s re-imagine the process to make bigger product.’”

Diocese of El Camino Real Bishop Mary Gray-Reeves said the church’s “greatest asset” is the people in the pews “and what we’ve done is we’ve said the creative asset should run through this thing called the CCABs [the church’s committees, commissions, agencies and boards] and that’s the lie that’s perpetuated in this hierarchal system.”

George agreed, saying “the point is it’s not about cutting down our bureaucracy, it’s about rethinking it so that it naturally has a very different role; that’s the radical shift that I think we need to make.”

The rest of the meeting’s agenda

The group met privately during the afternoon of Dec. 6 and was scheduled to begin discussing possible proposals and to hear from a subcommittee on the constitutional and canonical implications of any of those proposals. TREC’s half-day session on Dec. 7 will be open. During that session, George said, the group will decide its next steps, including how to begin to draft its report to the church. The task force expects to issue a statement to the church about this meeting early in the week of Dec. 8, Loya told Episcopal News Service.

ENS coverage of the initial work of TREC is here.