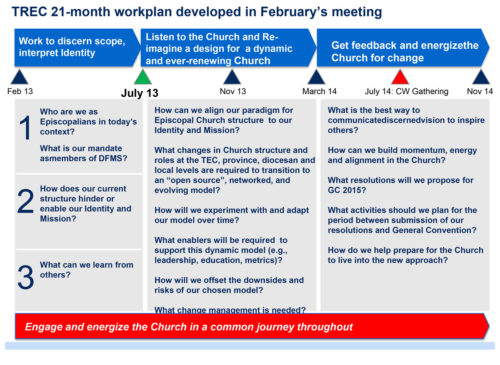 [Episcopal News Service] Last July, the General Convention was filled with what one of the two conveners of the Task Force for Reimagining the Episcopal Church calls “extraordinary and unanimous energy around reforming our structures of governance and administration.” Now, a year later, that task force created by convention faces the large job of channeling that energy into specific recommendations acceptable to the next meeting of convention.

Just more than five months into its formal work the group knows that “simply changing things for change’s sake is not going to be particularly effective or helpful to the church,” according to the Rev. Craig Loya, who acts as co-convener of the group with Katy George.

The task force’s most recent meeting was July 12-13. Following the meeting, George and Loya together spoke to ENS about the work of the task force thus far and its plans and hopes for the trajectory of its work in the coming months.

“The task force is engaging in a deeply spiritual process where we’re not just trying to run through an exercise in organizational, bureaucratic, structural change but [instead] where we’re really trying to listen to how the Holy Spirit is calling the church in this moment,” said Loya. “Of course, 24 people can’t do that alone; that’s really a church-wide process of listening to the spirit.”

And, says George, the group knows there is an Episcopal Church track record of sorts that the task force is going up against.

“There have been attempts to make improvements to church-wide structures and governance in the past and there are probably more examples of things that have been voted down or haven’t had the impact that people had hoped for, than of great successes,” she said.

Loya suggested those results came because “we as church have never tried to articulate a broad vision for what the church-wide organization is supposed to do to advance the mission and ministry of the church in a really specific, really intentional kind of way.

(A summary of earlier efforts is here in section IV of the task force’s “Interim Report of TEC Structure for Dummies Committee.”)

Thus, the task force aims to cast a vision for what the church-wide organization should do and, therefore, be, and propose a holistic way to get there. The proposals, George and Loya said, will be guided by a set of principles that the task force intends to field-test with the wider church.

George is an economist who runs the New Jersey office of global management consultant McKinsey & Co. She has also served on the board of Episcopal Relief & Development. Loya, until recently the canon to the ordinary in the Diocese of Kansas, will soon become dean of the cathedral in Omaha, Nebraska.

How the task force began and how it is operating

At the group’s first meeting back in February, the members decided to change the working name of the group from the task force for church structural reform to Task Force for Reimagining the Episcopal Church, a reference to the resolution’s statement that General Convention believes the Holy Spirit is urging the Episcopal Church to reimagine itself.

It is emblematic that the task force is operating slightly differently from most of the church’s committees, commissions, agencies and boards by changing its title, using a co-convener model of leadership, trying to work by consensus and operating in frequently changing smaller work groups. They hope their operation will model new ways of working as a church, George said.

“Probably some people outside of our task force would like it if we were taking careful minutes and things like that and that’s actually not how we’re operating,” she said. “We’re operating in a very different way and it’s not parliamentary at all.”

There have been times when “there seem to be strongly held different points of view about something and suddenly someone says something and … everyone suddenly sees the right path forward … and suddenly the room feels light, and we move forward together in a way that we feel all very deeply committed to,” according to George.

“So we really haven’t had to figure out how to vote or to resolve conflict because we’ve been able to work through to create common points of view. And there are other times that people on the task force clearly are slightly pushed outside their comfort zone, including Craig and me at times, but are willing to lean in and see where it leads us, and it leads somewhere good,” George said. “It’s been a very good dynamic on the task force and one we hope that we can share with the rest of the church.”

The task force has divided itself into limited-term work groups to study specific issues and report back to the group the next time it meets. The group leaders and George and Loya talk bi-weekly between meetings to monitor progress, the co-conveners said.

Three of the first four groups, formed at the February meeting and reporting at the July gathering, studied the church’s current structures for governance and administration, past efforts to change those structures and the experience of other organizations going through major change, and Episcopal identity. A fourth group began looking at how to develop a strategy for church-wide engagement.

Summaries of some of that work are here. Other of the work groups verbally reported to the July 12-13 TREC meeting.

A major task for the group in the beginning was to decide how to interpret the mandate it has in Resolution C095.

The members discussed what it might mean to “reimagine” the Episcopal Church and reform its structures, governance and administration. And, they considered the issue of where the Christian church is now – and where it is not, according to George and Loya.

The Christian church now faces the imperative to “take the church to the world rather than wait for the world to come to us,” he said.

And it must ask itself what kinds of governance and administrative structures, what ways of making decisions and what ways of being organized in community will best serve that effort, Loya suggested.

Inevitably, any talk about cultural changes and their impact on the church — and any talk about the implication of those for the church’s structure — turns to money, and the lack thereof. However, the co-conveners said, the task force senses that that is the wrong focus.

“Is our primary task to figure out how to enable the current Episcopal Church church-wide organization model to operate at a lower income level?” George asked. “I think our answer would be ‘no, that is not our primary role at all.’ Our primary role is to envision [how] as the church is emerging and evolving in new ways – and that’s happening everywhere – how do we really ensure that the church-wide organization structures and governance enliven that evolution rather than pull the church back to a different era when local church dynamics were quite different.”

The task force senses that it does not need to invent a “new missional response” to this changing context, George said. That response is already emerging across the church and “it will continue to emerge and evolve and change over time.”

“We need to ensure that the church-wide structures and governance are supportive and flexible and adaptive as the church is adapting and changing,” she said.

Her summary of TEC’s role, they said, is how the members have come to understand C095’s mandate.

For the next few months, the task force has re-divided itself into two work groups. One group is working on creating a “purposeful and proactive way of engaging different groups around the church,” George said, one that “brings the church along on this journey with us.”

They hope to have the “tools and approaches” ready in the fall to “really begin that dialogue in earnest,” she said.

Some people have already talked with the task force via its website and its Facebook page and Twitter presence but the task force wants to “increase the intensity and breadth of that dialogue,” she said.

The group also plans to seek out some groups within the church for their expertise and others “that represent voices not often heard from both within and outside the church,” according to a press release issued after the July meeting. TREC will also make resources available so that any local or regional group can participate in the listening process, and provide input.

Another work group continues to work on the principles meant to provide a vision developing specific legislative proposals.

TREC meets again face-to-face Dec. 6-7 at the Maritime Institute in Linthicum Heights, Maryland, outside of Baltimore. Members will share what they have heard in the church engagement process and review a draft of the principles.

The task force will make its proposed principles public and “start testing them with groups in the church through the church-wide dialogue,” George said, adding that some testing may happen in the fall.

Also in December, the members will begin the “multi-month process” of defining priorities around specific proposals and which changes the task force will suggest to convention, she said.

Engaging the church in the conversation

Resolution C095 called on the task force to hold a “special gathering” to receive responses to any proposed recommendations it is considering sending to the 2015 meeting of General Convention. The task force was to invite from each diocese at least a bishop, a lay deputy, a clerical deputy and one person younger than 35 years.

It was generally seen during the 2012 convention that C095 envisioned a gathering similar to the church-wide consultation convened in March 2011 by the Standing Commission on Liturgy and Music to discuss its work on same-sex blessings. However, while that gathering included about 200 people, the one outlined by C095 would require close to 500 participants, Loya said.

“The reality is that the budget adopted by General Convention did not include the funding for that gathering that is mandated,” he said.

The task force has said that it would cost an estimated $450,000 to hold such a gathering.

In addition, the task force will have met three times for two days each by the end of 2013. Each of those meetings cost money as well.

While Resolution C095 called for $400,000 to cover all of the group’s activities for the triennium, General Convention approved (line 282 here) $200,000 specifically for the gathering and allocated $630,449 to be divided among all of the church’s committees, commissions, agencies and boards, including the task force.

The task force asked for and received a $150,000 grant from Trinity Wall Street and Loya told ENS “we also talked about other ways to convene … that may be a helpful way of modeling new ways for the church to gather.”

“All of us want to do everything we can, since we’re accountable to the General Convention, to honor our mandate,” he said. “At the same time, if the mandate is not funded we’re left in that difficult position.”

“What we’re really working hard to avoid is being a group of 24 people who go into a room for a couple of years and then come out with all kinds of proposals for change,” Loya said. “We’re really wanting, much more than that, to facilitate a conversation around the church.”

In addition to whatever the final parts of the task force’s church-wide engagement process are, Loya and George asked that Episcopalians “join us in praying and listening to the spirit.”

Resolution C095 calls for TREC’s final report to the church, including its recommendations and any proposed resolutions for convention, to come out November 2014.

How to get involved right now

TREC can be reached by email at reimaginetec@gmail.com