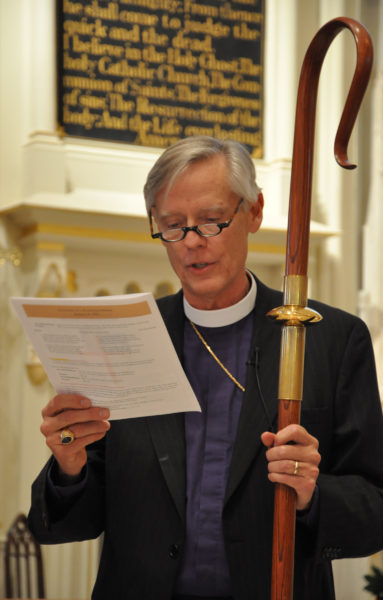 [Episcopal News Service – Charleston, South Carolina] Meeting in a town nicknamed the Holy City because of its founders’ religious tolerance and in a church that has survived the Civil War, great storms and an earthquake, Episcopalians in South Carolina turned to face their future.

Continuing Episcopalians from around what is known as the Lowcountry portion of South Carolina met Jan. 26 at Grace Episcopal Church, which was festooned with flowers and overflowing with people. Many participants expressed the desire for healing and new beginnings.

The day began with Holy Eucharist, during which Presiding Bishop Katharine Jefferts Schori told the congregation in her sermon that “we all have a responsibility to be shepherds, to help others find their way through the gate of abundant life.”

“Some are also simply exhausted. What about the sheep who aren’t in the fold, who don’t know there is a feast to be found, rest for the body and soul, and partners who are willing to wrestle with the dictates of petty deciders or wolves who masquerade as sheep?”

Jefferts Schori told the story of a glider pilot who local authorities accused of flying too near a nuclear power plant and then arrested, despite lacking any authority to take him into custody. She said the story was “indicative of attitudes we’ve seen here and in many other places.”

“Somebody decides he knows the law and oversteps whatever authority he may have to dictate the fate of others who may in fact be obeying the law – and often a law for which this local tyrant is not the judge,” she said.

“Most of us don’t live in a world where one person is the ultimate decider – because, over and over again, we’ve discovered that better decisions are made when they’re made in communities with appropriate checks and balances,” Jefferts Schori said. “Power assumed by one authority figure alone is often a recipe for abuse, tyranny and corruption.”

However, she said, “the question is less about who’s right and who’s wrong in the midst of the current controversies.”

“It’s more about how we deal with those who disagree – the other sheep in the flock and the variety of shepherds around us,” she said.

Noting “God’s feast doesn’t need ‘keep-out’ signs,” Jefferts Schori said: “The banquet table is spread with abundance for all, even though it’s hard to join the feast if you’re busy controlling the gate.” 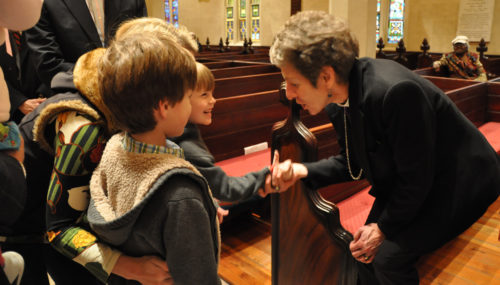 She drew loud applause and a standing ovation as she concluded her sermon by saying that Jesus already was in charge of the gate, “and the word is out: ‘Y’all come! Come to the feast!’”

The full text of her sermon is here.

Later in the meeting, the Rev. Gay Clark Jennings, president of the House of Deputies, told the gathering that “the House of Deputies and the entire church are covering you with prayer as you renew, reorganize, reorder, refresh, reconstitute and, indeed, resurrect the Episcopal Church in South Carolina.”

Jennings suggested to participants: “When it may seem as if the great breadth of conviction, experience and practice among Episcopalians threatens to overwhelm your longing for unity and clarity,” remember the Jan. 26 gathering and “the communion of saints that has gone before you.”

“I hope you will be convinced, as I am, that our Anglican comprehensiveness is our particular gift from God and a great blessing for the Episcopal Church in South Carolina,” she said. “Follow the Anglican middle way, and it will guide you between extremes in the company of Christians from all walks of life and all gifts of the Spirit.”

The full text of her remarks is here.

Lay and clergy delegates from nine parishes, 10 missions and eight “continuing parishes” were seated for the meeting. The term “continuing parishes” refers to congregations in which some but not all members have followed Bishop Mark Lawrence out of the Episcopal Church. Also among the more than 600 registrants were members of four “worshipping communities” that are in the process of organizing, as well as members of other congregations that are discerning whether to remain in the Episcopal Church. 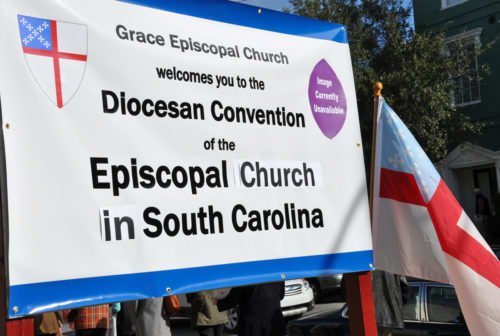 The group agreed to use the name “the Episcopal Church in South Carolina” in place of what Tisdale, later elected chancellor, called “what we believe is our true and lawful name.”

A hearing is set for Feb. 1 on South Carolina Circuit Court Judge Diane S. Goodstein’s order preventing any “individual, organization, association or entity” from using registered names and marks that are claimed by Lawrence and 24 other leaders associated with him. More information about the lawsuit is here.

The delegates at Grace Church chose by acclamation retired Diocese of East Tennessee Bishop Charles vonRosenberg to be their bishop provisional. Jefferts Schori installed vonRosenberg during the meeting and turned over the running of the meeting to him.

A bishop provisional has all the authority and responsibilities of a diocesan bishop but typically serves for a set period of time and is meant to be a bridge into the time when the diocese is ready to elect a diocesan bishop or make other decisions about its future.

The Episcopalians needed a new episcopal leader because Jefferts Schori said Dec. 5 that Lawrence had renounced his orders. She and her Council of Advice agreed that, in a Nov. 17 speech to a special diocesan convention, Lawrence said the diocese had left the Episcopal Church a month earlier on Oct. 17 when she restricted his ministry after the church’s Disciplinary Board for Bishops had certified to her that he had abandoned the Episcopal Church “by an open renunciation of the discipline of the church.”

The day the board’s decision was announced, the diocesan Standing Committee said that the action “triggered two pre-existing corporate resolutions of the diocese, which simultaneously disaffiliated the diocese from the Episcopal Church and called a special convention.” Lawrence asked for and received affirmation from those at the Nov. 17 gathering of that departure.

Thus the remaining Episcopalians needed a new bishop and a slate of lay and clergy leaders, which also was elected on Jan. 26.

VonRosenberg, 65, has long ties to South Carolina. He and his wife, Annie, already live in the Daniel Island community of Charleston, where he retired in 2011 after serving for 12 years as bishop of East Tennessee. Since October, he has served, along with retired Bishop John Buchanan, on a voluntary basis as adviser to the steering committee that formed in October.

“Here we are, a group of people committed to the Episcopal Church, some sadly displaced from their spiritual homes, others finding new life in exciting times – and a bishop who thought he had retired,” vonRosenberg told the gathering. “Here we are facing an uncertain future and relying on others for strength and support, and depending on God’s grace for the tomorrows that await.”

He urged rebuilding the Episcopal Church in South Carolina upon the foundation of what he called the “Christly virtues” of humility and love, beginning with seeking forgiveness “for our failure to achieve Christian unity in our times.”

VonRosenburg told the participants that, “as followers of Jesus Christ, we need to recognize that other sincere Christians – former Episcopalians – have chosen a path different from ours. Theirs is a path committed to Jesus as they understand that faith.”

The full text of vonRosenberg’s address to the meeting is here.

At a later press conference, the bishop suggested that healing could begin when, instead of talking over each other’s heads, people began to find hope in their previous relationships.

“My hope,” he said, “is that as people realize that the ones who are perhaps on a different side at this time are not demonic, [that they] are not unchristian but have chosen a different way.”

The bishop said “as we come to that point and confront each other as people, that’s where our hope lies and where, I believe, reconciliation begins.” 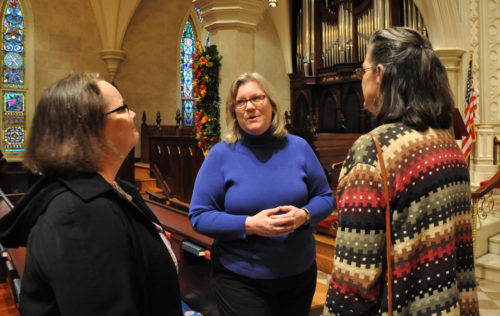 Indeed, not everyone who attended the Jan. 26 meeting, or the nearly 500 who attended a reception with the presiding bishop the previous evening, has decided where he or she will end up.

Cheves Leland, delegate to the meeting from St. James Episcopal-Santee, told ENS that her congregation was in discernment about its affiliation. St. James is a “small congregation in a small village” whose members do not all agree about which direction to take, she said.

She has often voted opposite from the congregation’s other delegate. “We say our votes are divided, but we are not,” she said.

Whatever the congregation decides, the decision will affect everyone, Leland said.

“We really don’t want to split and have people leave,” she said. “I believe there is a place for everybody in the church and with God.”

Julie Walters, the director of children’s ministries at Grace, knows she stands in the Episcopal Church, just as her ancestors did six generations ago when they help to found Grace, she said. But she finds herself set against her Episcopal neighbors. She has been defending herself “in the grocery store and on the tennis court” against accusations by other Episcopalians who she said were “only hearing one side” of the story.

“It just shocks me,” she said, adding, “I hate this fight more than anything else.”

The fight, she said, is not about liturgical changes or changing interpretations of Scripture.

“It’s a fight about rule breaking … we had the same fight over women” being involved in church leadership, said Walters, whose godmother was, as Walters put it, the first female “vestryman” at Grace and was a target of disagreement.

Elizabeth Jones told ENS Jan. 25 that she had a simple wish for the weekend: “that this is the beginning of the healing.”