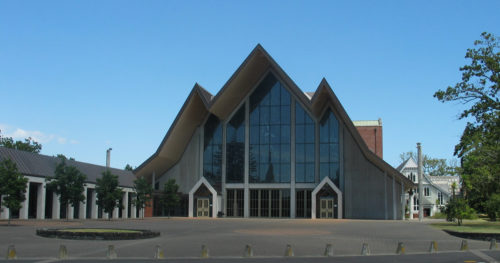 Auckland’s Holy Trinity Cathedral, shown here with historic St. Mary’s Cathedral in the background, will be the site of most of the Anglican Consultative Council’s 15th meeting Oct. 27-Nov. 7.

[Episcopal News Service] The 15th meeting of the Anglican Consultative Council Oct. 27-Nov. 7 is being billed in Auckland, New Zealand, as a “once in a lifetime” event that will be “the biggest-ever Anglican gathering to hit these shores.”

And, the Episcopal Church’s ACC members are eager to be part of a gathering that will discern ways in which Anglicans can deepen their understanding of their common call to God’s mission in the world.

“I am more optimistic about the [Anglican] Communion than I have been in recent years,” Josephine Hicks, the Episcopal Church’s longest-serving member of the ACC, told Episcopal News Service. “I hope that optimism is reinforced at this meeting.”

While it has no jurisdiction over the 38 individual provinces of the communion, its constitution says that its objective is “to advance the Christian religion and in particular to promote the unity and purposes of the Churches of the Anglican Communion in mission, evangelism, ecumenical relations, communication, administration and finance.”

Presiding Bishop Katharine Jefferts Schori said in comments e-mailed to ENS that the ACC “provides a focused opportunity for cross-provincial dialogue about issues of local and more global concern, and it is the only body of the Anglican Communion that makes formal legislative decisions.”

Meetings of the ACC are a “key and important way the Anglican Communion comes together,” Diocese of Connecticut Bishop Ian Douglas, the church’s episcopal member on the ACC, told ENS.

Douglas added that “while [the ACC’s] primary job is advocating positions – we can’t force any church to do anything – the Anglican Communion itself at this level of common participation is broadly representative and we celebrate that kind of representative coming together that embraces differences, different orders, different genders, different peoples from around the world and that’s not to be minimized.”

The ACC’s diverse members will be asked to consider issues ranging from the current status of the Anglican Covenant and the Anglican Communion Office’s financial situation, to ecumenical and interfaith relations and reviews of the work of the office’s staff and that of the communion’s 14 networks that help coordinate the communion’s work of mission and social justice.

Also, members have been asked to report on the status of the Anglican Covenant in their provinces.

Jefferts Schori said it is “hard to say what will come forward [out of the ACC’s covenant discussion] for decision or position statements, though this is the first time the ACC has said it would discuss membership and ways forward around the covenant.”

Douglas suggested that “there was probably a hope that more churches would have adopted the covenant than have at this point,” and that fact “draws into stark relief” the question of the covenant’s future.

He predicted the covenant discussion could include questions of how many provinces must adopt the covenant before it is considered to be in effect and what the timeframe for adoption might be. None has yet been sent, even though the provinces have had the covenant for nearly three years.

“And then a related question is the other end: If the covenant does not have, if you will, legs, then when is the covenant discussion drawn to an end?” Douglas added.

If the “covenant exercise,” as Douglas put it, were to end, its impact would still have been worthwhile, he said.

The Rev. Gay Jennings, president of the House of Deputies and the church’s clerical ACC member, told ENS that she comes to her first ACC meeting in hope that that covenant exercise will point the communion in a different direction.

“Given the lack of enthusiasm for the proposed Anglican Covenant, I hope that at this meeting the Anglican Consultative Council can catalyze more collaborative and productive ways for the Anglican Communion to pursue the mission to which God calls us in our ministries around the world,” she said in a comment e-mailed to ENS.

Hicks says it seems the covenant “has lost a lot of steam” and while she is “not prepared to say it will never happen,” she sees the need for Anglicans to come together and learn from each other. Those opportunities, such as the communion’s Continuing Indaba process, ought to provide ways “for people to meet each other, spend time together, spend time with each other in different contexts — really engage with each other on issues in a genuine and thoughtful way, not in the context of plenary debates on the floor of some legislative body, but sitting around tables with a cup of coffee, talking about issues.”

“I think that [model] has much more promise for Anglicans to regain a stronger sense of unity and a renewed sense of common mission, even in spite of different views on issues,” she added.

The Anglican Covenant first was proposed in the 2004 Windsor Report as a way that the communion and its provinces might maintain unity despite differences, especially relating to biblical interpretation and human sexuality issues. The last ACC meeting, in Jamaica in May 2009, decided to delay release of the third and final draft of the covenant to the provinces for their consideration because the ACC members thought the covenant’s process for resolving disputes needed more work.

After a small working group solicited input from the provinces about that process, the final version of the covenant was released to the provinces for formal consideration in December 2009. Seven provinces (Ireland, Mexico, Myanmar, Papua New Guinea, South East Asia, Southern Cone of America, and the West Indies) have approved or subscribed to it. Two (the Scottish Episcopal Church and the Anglican Church in Aotearoa, New Zealand and Polynesia) have refused to adopt it, and the Episcopal Church in the Philippines’ bishops also have rejected it.

In March, it became clear that the Church of England could not adopt the covenant in its current form when a majority of its dioceses voted the document down.

The Church in Wales in April gave the covenant “an amber light, rather than a green light” as its governing body said it feared the Church of England’s rejection of the covenant jeopardized its future.

The Anglican Church of Southern Africa has adopted the document pending ratification at its next synod meeting later this year.

At the General Convention in July, the Episcopal Church, via Resolution B005, “declined to take a position” on the covenant. Convention also passed Resolution D008 which pledged that the Episcopal Church would “maintain and reinforce strong links across the world-wide Anglican Communion committing itself to continued participation in the wider councils of the Anglican Communion” and “deepen its involvement with communion ministries and networks.”

While some people have suggested that acceptance or rejection of the covenant might determine a province’s future membership in the communion, Douglas said such a position would be “an erroneous starting point” and “divisive.”

“I don’t think there’s a spirit right now in the Anglican Communion or in the ACC that is wanting to foment that kind of divisiveness and that kind of discussion tending towards alienation,” he said.

Hicks, who began her term with the ACC’s 13th meeting in Nottingham, England, in June 2005 when the Episcopal Church and Anglican Church of Canada representatives had voluntarily withdrawn from the meeting and attended only as observers following a request from the provinces’ leaders, would agree.

“The strongest theme … since 2005 — being involved in these Anglican Consultative Council meetings and continuing to stay in touch with members of the ACC inbetween meetings — is that we have much more in common than we differ on as Anglicans and most people are really interested in focusing on our common mission and do not want differences of opinion on sexuality or any other issue to derail that,” she said.

Also on the ACC agenda in Auckland is:

ACC-15 opens with a powhiri on the morning of Oct. 27 at the TelstraClear Pacific Events Centre in Auckland. The powhiri, a central part of Māori protocol, is a ceremony of welcome involving speeches, dancing, singing and hongi, the traditional Māori greeting in which two people press their foreheads and/or noses together.

Students from Anglican schools in Auckland and the surrounding area will form a kapa haka party as part of the welcome. Kapa haka is a traditional Māori performance art that can include soft choral singing with war chants, screams, foot stamping, tongue protrusions and rhythmic body slapping.

There also will be a time during which young people can ask Archbishop of Canterbury Rowan Williams about the state of the church and its future.

Later on Oct. 27, the ACC will get an orientation to the meeting and close the day with evening worship. Those two events will take place in Auckland’s Holy Trinity Cathedral, the site of the ACC meeting.

The meeting’s opening Eucharist is set for the morning of Oct. 28 at the cathedral and Williams will preach.

Additional ACC background
Formed in 1969, the ACC’s membership includes from one to three persons from each of the Anglican Communion’s provinces. Where there are three members, there is a bishop, a priest and a lay person. Where fewer members are appointed, preference is given to lay membership.

Bishop James Tengatenga of Southern Malawi chairs the ACC and Elizabeth Paver, lay representative for the Church of England, is vice chair. The Rev. Canon Kenneth Kearon, secretary general of the Anglican Communion, is the secretary to ACC meetings.

Jennings, who is also president of the House of Deputies, recently completed a term on Executive Council, which elected her in 2010 to fill out of the remainder of Douglas’ clerical term after Douglas had to resign his clerical position when he was elected bishop in October 2009. The Executive Council later elected him as the church’s episcopal, or bishop, member.