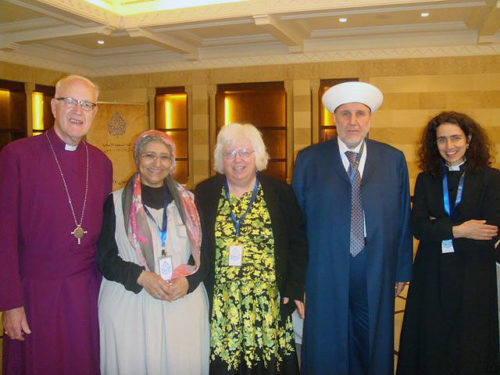 Among those debating the plan of action at the Beirut Summit were, from left: retired Archbishop of Canterbury George Carey; Sanaa Makhlouf of American University Cairo; Clare Amos, inter-religious program executive of the World Council of Churches; Mufti Malek Shaar of Tripoli and North Lebanon; and the Rev. Chloe Breyer, Episcopal priest and executive director of the Interfaith Center of New York. Photo/Eileen Read

[Episcopal News Service, Beirut] A landmark three-day Christian-Muslim peace conference concluded on a hopeful note here by issuing an appeal to religious leaders and institutions to collaborate on promoting human rights, self-determination, peaceful co-existence, and non-violence, particularly in Jerusalem and the Holy Land.

“There are over five billion Christians and Muslims throughout the world, and although we do not speak for all of them, we are here to say that violence has no place in the teachings of Mohammed nor Jesus. We are here to say that no one, no one has the right to take the life of another in the name of God,” said the Rt. Rev. John Chane, bishop of the Episcopal Diocese of Washington, in announcing the agreement to the more than two dozen delegates representing Episcopalians and Anglicans; Roman, Armenian, Melkite, and Maronite Catholics; and Sunni and Shi’ite Muslims.

The meeting, second in a planned series of four, broke new ground on several fronts including the presence of high-ranking Shi’ite ayatollahs who flew from Iran to meet with an international Sunni delegation led by Mufti Malek Shaar of Tripoli and North Lebanon, along with Vatican officials and Catholic leaders, including Patriarchate Emeritus of Jerusalem Michael Sabbah and Archbishop emeritus of Washington Theodore Cardinal McCarrick, and the 103rd archbishop of Canterbury, the Rt. Rev. and Rt. Hon. George L. Carey.

The Shi’ite delegation’s leader, Ayatollah Seyyed Mohammad-Ali Taskhiri, praised the “beautiful moments of the past two days, moments of compassion, understanding, and freedom. We are all sons and daughters of God, children of God. I felt in these moments that religious leaders have a great role they could play in society. They could be the greatest players to help society reach very high places.”

The conference, “Christians and Muslims Building Justice and Peace Together in a Violent, Changing World,” was headquartered in a just-opened seaside hotel in newly reconstructed downtown Beirut, an area left in rubble after Lebanon’s civil war. The delegates met in the city’s rebuilt Maronite cathedral and deliberations took place next door in a modern mosque built as a powerful symbol of mutual tolerance – and yet a reminder of the ever-present threat of Middle East violence. The mosque was under construction when its patron, then-Prime Minister Rafik Hariri, was assassinated nearby in 2005, and conference-goers walked by his adjacent tomb several times a day to and from their meetings.

The opening session included hundreds of Lebanese religious and government officials, representing the nation’s sectarian polyglot. Public sessions were attended by former Lebanese President Amin Gemayel, a Maronite Christian leader whose brother and son were both assassinated while holding political office, as well as by former Prime Minister Fuad Siniora.

Summit participants found many areas of common cause, including the need to promote freedom of religion and religious education, to halt Christian emigration from the Middle East, to include greater roles for women, and to condemn the “massacres and bloodshed” in nearby Syria, where they sought “to grant the Syrian people their rights to live in dignity and self-determination.”

“At various times, despite their teachings, some people have been involved in the killing and oppression of people and denial of their freedoms … includ[ing] intellectual violence,” the group’s Plan of Action said. “Thus, we ask for the language of dialogue and negotiations to prevail over the language of weapons.”

The Plan of Action included a clear message that moving forward together requires acknowledgement of centuries of wrongdoing in the name of religion, a message sounded throughout the meeting as delegates such as Catholic Archbishop Patrick Kelly of Liverpool invoked the scars of the Crusades, empire, forced migration, and terrorism. Archbishop Kelly reminded the group of the historic, conciliatory visit of Queen Elizabeth to Ireland last year, and her open acknowledgment that “there were many things that we wish we had done differently, and many things that we wish had never been done at all.”

The Summit’s joint statement highlighted the centrality of the occupation of Jerusalem and the Palestinian territories as a source of world conflict. “The resolution, through justice for all, of the conflict between Israelis and Palestinians is an essential foundation to build justice and peace, not only for this region, but for the world,” noted the agreement, in reaffirming the message of a previous summit in Washington, D.C., in 2010.

The group listed as its first action item a declaration that “peace will not be achieved unless justice prevails in the world and until all peoples enjoy their full rights, including the right to have their own states and the right to self-determination. We are especially mindful of the violence which the Palestinian people have suffered for more than sixty years. We are also mindful of the international binding agreements, inter alia the relevant United Nations resolutions in this regard, and call for their full implementation.”

The action plan stated the delegates’ “full rejection of all attempts to alter the identity of the city of Jerusalem and its Holy Places.”

The plan did not address how the religious communities can achieve this or other enormously complex goals that involve the international political arena, though organizers announced that they hope to convene again in the next couple of years — perhaps in Rome or in Teheran — to continue their dialogue. The summit did, however, achieve a major accomplishment in bringing together disparate religious leaders to find commonality.

“The climate of inter-religious dialogue has positively changed,” said Cardinal Jean-Louis Tauran, who heads the Vatican’s Pontifical Council for Inter-Religious Dialogue. “But all the great challenges remain to bring this development to the grassroots level.”

Among those assembled from the Anglican Communion were officials known for interfaith work: the Anglican Bishop in Jerusalem, Suheil Dawani, leader of 30 parishes and more than 30 social service institutions throughout Lebanon, Syria, Jordan, the Palestinian Territories, and Israel; Bishop Michael Ipgrave of Woolwich, England, former interfaith relations adviser to the Archbishops’ Council of the Church of England; and Clare Amos, inter-religious program executive of the World Council of Churches. Young Episcopalians were represented by the Rev. Chloe Breyer, executive director of the Interfaith Center of New York.

Religious leaders’ papers presented at the Summit and details of the group’s 2010 Summit, held at Washington National Cathedral, are available here.

– Eileen Read is a freelance journalist based in Los Angeles.