The three-day conference, which opened June 18, is taking place against a regional backdrop that includes the conflict spilling into Lebanon from nearby Syria, the chaotic Egyptian elections, the threat of nuclear strikes between Israel and Iran, and following the 45th anniversary of the 1967 war that ended in the occupation of the Palestinian Territories. 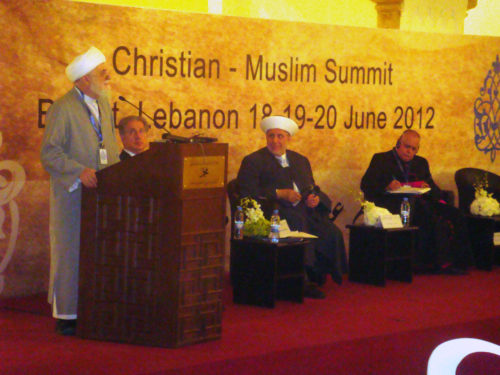 The highest ranking clergyman of the Iranian group, Ayatollah Seyyed Mohammad-Ali Taskhiri, invoked the sense of near-emergency felt by many of the delegates, as he urged the dozens of religious leaders – representing nearly all strains of Christianity and Islam – to envision “the heaven and passion of coexistence,” adding that “dialogue was born with humanity itself.”

The international peace summits – two more are planned – were organized at Washington National Cathedral by the Rt. Rev. John B. Chane, 8th bishop of Washington, D.C., and the Rev. Canon John L. Peterson, director of the cathedral’s Center for Global Justice and Reconciliation.

The first event, held at Washington national Cathedral in May 2010 brought together Shi’ite clergy from other countries with Sunni Muslim, Catholic, and Protestant representatives. Over three days of meetings, the group hammered out a call to action asking “government and community leaders to promote peace and reconciliation efforts worldwide,” especially in the Holy Land. [Details of the 2010 summit are available here.]

The 2012 Beirut summit, themed “Building Justice and Peace in a Violent, Changing World,” was opened by former Lebanese President Amin Gemayel, a Maronite Christian leader whose brother and son were both assassinated while holding political office. Standing in Beirut’s new Al-Amin Mosque, Gemayel called on the group not to try to “reduce differences,” but rather to find commonality through dialogue so that they could together “face the world of fundamentalism and other-ism.” 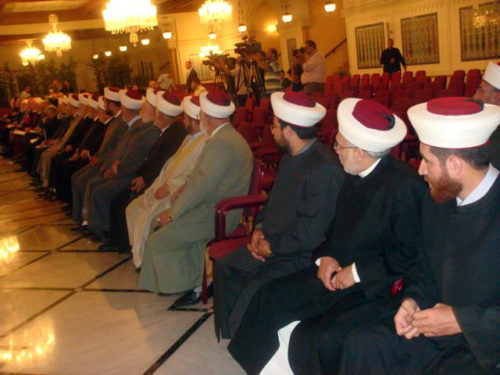 The distinctive head pieces worn by Lebanese Sunni Muslim mufti were much in evidence at the Christian-Muslim summit, held in Beirut at the city’s central mosque and its Maronite Catholic cathedral. Photo/Eileen Read

Said Chane: “It’s clear that once faith is either removed from public life or is challenged as a guide for compassionate care of the other through the values of kindness and goodness … then a vacuum is created. When such a vacuum occurs, fringe elements from both religions corruptly reinterpret time-honored core teachings and religious values in order to support their own personal or political needs and desires.”

Among those assembled are Anglican Communion officials known for interfaith work, including former archbishop of Canterbury George L. Carey; Bishop Michael Ipgrave of Woolwich, England, and former interfaith relations adviser to the Archbishops’ Council of the Church of England; and Clare Amos, inter-religious programme executive of the World Council of Churches. 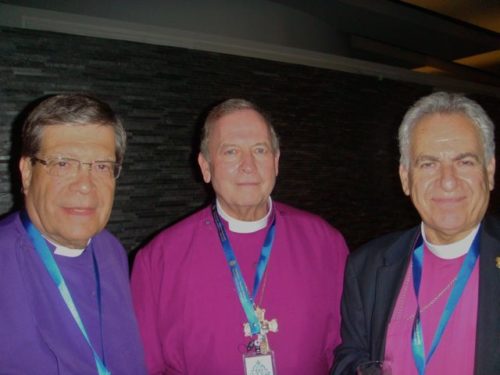 Also attending is Anglican Bishop in Jerusalem Suheil Dawani, leader of 30 parishes and more than 30 social service institutions throughout Lebanon, Syria, Jordan, the Palestinian Territories, and Israel. Dawani reminded the group of the crucial importance of “strengthing the Christian presence in the Middle East and the Holy Land in particular.” Sounding the summit’s theme of interdependency, he noted that the presence of Christians in the Holy Land “will not be improved without widespread support of Christians worldwide and our Muslim and Jewish friends and neighbors.”

Young Episcopalians from the U.S. are represented by the Rev. Chloe Breyer, executive director of the Interfaith Center of New York and a well-known author, blogger, and public speaker.

Rounding out this group are representatives from other Catholic denominations prevalent in the Middle East, including the dominant Maronite Church from Lebanon, the Melkites, and the Armenians.

The large Lebanese Sunni group is led by the Mufti of Tripoli & North Lebanon, Sheikh Malek Shaar. A Sunni woman is participating from Egypt, Sanaa Aly Marei Makhlouf, a professor at American University of Cairo.

“It was a stimulating and engaging start to the conference, in which presentations by the Sunni and Roman Catholic delegations opened the discussion,” said Carey. “I think it was a very good day.” The Shi’ite and Anglican Communion principals, along with their delegations, will be making their presentation on the second day of the summit.

Many of the principals who attended the much-smaller gathering two years ago praised the summit organizers for moving the second round to the Middle East. “It’s an important statement of our ongoing commitment to work toward reconciliation in a way that can make a real difference to people of the region, both Christians and Muslims,” said Amos.

Following the opening session, the summit received enormous press coverage on Lebanese television, radio, and print media, as well as Middle East-based cable channels Alhurra and Al Jazeera. “This,” noted Peterson, “reflects the importance of the summit in finding ways to work towards justice and peace.”

— Eileen Read is a freelance journalist based in Los Angeles.