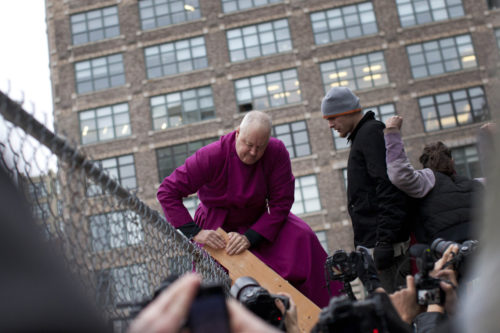 [Episcopal News Service] A retired Episcopal bishop and a priest from the Episcopal Diocese of New York were among seven people convicted June 18 on charges of trespassing on property owned by Trinity Episcopal Church, Wall Street, during a Dec. 17 Occupy Wall Street demonstration and sentenced to four days of community service.

George Packard, former Episcopal bishop suffragan for armed services and federal ministries, and the Rev. Earl Kooperkamp, rector of St. Mary’s Episcopal Church in Harlem, had faced up to 90 days in prison on the most serious charge, Packard’s lawyer, Gideon Oliver, had previously told ENS.

An eighth defendant, Mark Adams, was convicted of trespassing and additional charges of attempted criminal mischief and attempted possession of burglar’s tools, reportedly for trying to use bolt-cutters to slice through the fence surrounding the property. He was sentenced to 45 days in prison on Rikers Island and taken from court in handcuffs, Oliver said in a telephone interview after the trial.

“We’re considering whether or not to appeal,” he said. “We have 30 days to make that decision. I think for now everyone’s focus is on supporting Mark.”

In a statement on Trinity’s website, the Rev. James Cooper, rector, said the church supported many of the Occupy movement’s underlying principles and would continue to welcome protestors to its facilities in the Wall Street neighborhood but said it did “not support the seizure of private property.”

In court on June 18, Cooper’s testimony “was focused primarily on Trinity’s position of not supporting an open encampment at Duarte Square or giving permission,” said Linda Hanick, Trinity chief communications officer and vice president of communications and marketing.

Packard and Kooperkamp were among 65 people arrested, including Diocese of Long Island priests the Rev. John Merz and the Rev. Michael Sniffen, on Dec. 17 after entering the property in Duarte Square in Lower Manhattan as part of an Occupy Wall Street event marking the end of the third month since the movement’s launch.

Livestream video Dec. 17 showed Packard climbing a ladder that protesters had erected against the fence and dropping to the ground inside the property, the first to enter the site.

On June 18 Oliver said, “Bishop Packard testified about his experiences with Rector Cooper and with Trinity around trying to act as a go-between between Occupy Wall Street and the church.”

“He testified that he had a belief that Rector Cooper and Trinity would exercise forbearance, and we argued that in legal terms that translated into an honest, good-faith belief that he had license or authority to enter the premises,” Oliver said. “The judge rejected that legal argument.”

Oliver said he was “disappointed more than surprised” that Judge Matthew Sciarrino convicted the eight defendants in the nonjury trial. “The legal system is set up to defend private property.”

“In some ways, the convictions make the moral arguments even stronger,” he added.

Packard said he was surprised, disappointed and saddened by the trial’s outcome. He spoke to ENS via cell phone while attending a post-trial conference about how to support Adams, who he said had “become the fall guy” for the Dec. 17 Occupy action. The prosecutor recommended a 30-day sentence, but Adams received 45 days, he said.

“The eight of us [defendants] feel sort of bonded in brotherhood,” he said. “We’re feeling like a member of the family has been torn out from among us.”

Trinity did not have to pursue the charges, but it opted to “protect fiduciary interests,” Packard told ENS. “It’s pretty sad. I mean, this is what our church has come to. You don’t have enough pledging units to sustain many places. So we depend on the cash flow of corporate investment. It’s a caricature of what the gospel is.”

Merz, priest-in-charge at the Episcopal Church of the Ascension, Greenpoint, Brooklyn, and Sniffen, priest-in-charge of the Episcopal Church of St. Luke and St. Matthew in Brooklyn, accepted a six-month adjournment in contemplation of dismissal (ACD) on Feb. 28, which means the charges against them were dismissed and they would have no criminal record if they were not arrested again in the next six months, according to a court official.

Packard told ENS in March that he chose not to accept an offered ACD because he wanted the chance to respond to the charges in court.

“I also probably will be arrested again,” said Packard, who has continued to participate in the Occupy movement and blogs about his experiences. “I’m not looking to be arrested, but the chances are pretty high.”

He subsequently was arrested with other military veterans during a May 1 demonstration at New York’s Vietnam Veterans Memorial Plaza. As of June 12, he had not yet been arraigned in that case, Oliver told ENS.

The trespassing trial was delayed June 14 after one of the defendants, Jack Boyle, who has been on a hunger strike and stopped taking his HIV medicine over the charges, was arrested the night before and hadn’t been processed yet. When the trial resumed that afternoon, about 40 people – including Merz and Sniffen and a Roman Catholic nun – came to observe.

In a June telephone interview, Packard had expressed surprise at the trespassing charges and the manner of his arrest.

When he entered the property Dec. 17, he said, “I felt that we were entering into a protected area and that it was closed for the season. I had visited hunger strikers on the perimeter of that space … three or four times. I have visited that location with Jim Cooper.”

“Trespass is a word that I’m not used to hearing as it’s related to church property,” Packard said. “I hear expressions like ‘refuge’ and ‘sanctuary,’ and even … in the Trinity newsletter they talk about ‘radical hospitality.’”

“It’s bewildering to me that Trinity has gone ahead with prosecuting these arrests. I fully thought they would just drop the charges,” Packard said. “I don’t put ‘trespass’ and ‘church property’ in the same sentence, somehow. Maybe I’m just naïve. I have a long history with Trinity Church.”

As bishop suffragan for armed services ministries, he spent time with Trinity clergy near Ground Zero after the Sept. 11, 2001, terrorist attacks on the World Trade Towers near Trinity’s St. Paul’s Chapel. “Those were horrid, awful days, and Trinity really showed forth to the world what a classy and wonderful institution it was. They offered refreshment and rest.”

On Dec. 17, “we weren’t even warned that we were going to be arrested,” he said.

At other protests that he has watched as chaplain, he said, “there’s always this big, fancy announcement over a bullhorn” warning people they face arrest.

“There was none of that,” Packard said.

In the June 18 statement, Cooper said that Trinity had “a long and active history in addressing social and economic inequities.

“While we are sympathetic to many of the OWS protestors’ stated goals, we do not support the seizure of private property,” the statement said. “Trinity urged the District Attorney’s Office to offer noncriminal dispositions before trial and to request nonjail sentences for those defendants who chose to proceed to trial. All protestors received sentences of four days of community service, except for one defendant who was convicted of additional crimes and had several open cases unrelated to Duarte Square. We continue to support the basic principles underlying the Occupy movement and will continue to welcome protestors, as we welcome all others in our community, to our facilities in the Wall Street neighborhood.”

As the trial continued, so did protests and “actions” in New York and elsewhere as part of the nine-month-old Occupy movement. Inspired by the Arab Spring, the Occupy movement, intended to protest what participants saw as rampant greed and inequality in the financial world, was launched Sept. 17 with Occupy Wall Street. Demonstrators set up camp in Zuccotti Park (formerly Liberty Plaza Park) and created a community with everything from an onsite lending library to working groups planning actions and statements on various social and economic concerns. Participants organized using “horizontal” rather than hierarchical leadership and made decisions at democratic “general assemblies.”

Some Episcopalians and other people of faith have supported the movement from the beginning. Harvard doctoral candidate Marisa Egerstrom organized a group called Protest Chaplains that participated in the launch at Zuccotti Park and has supported Occupy Boston. In New York, Episcopal clergy, including Diocese of Long Island Bishop Lawrence Provenzano and those arrested Dec. 17, spent time with occupiers at Zuccotti Park and have been involved with Occupy Faith NYC.

Packard’s lawyer is president of the New York City Chapter of the National Lawyers Guild, which has offered free legal representation to those arrested in connection with OWS protests, Oliver said. “I’ve handled a few hundred cases myself.”

Oliver — who described himself as an agnostic raised as a “liberal Jew” — said in a June 12 interview that he was inspired by Packard and religious affinity groups to OWS such as Occupy Faith. “I feel a political affinity and inspiration from what they’re doing … in the context of their own faith communities. It really sort of embodies the concept of ‘Occupy everywhere,’ which post-the Liberty Plaza eviction took on a different and more urgently literal meaning.”