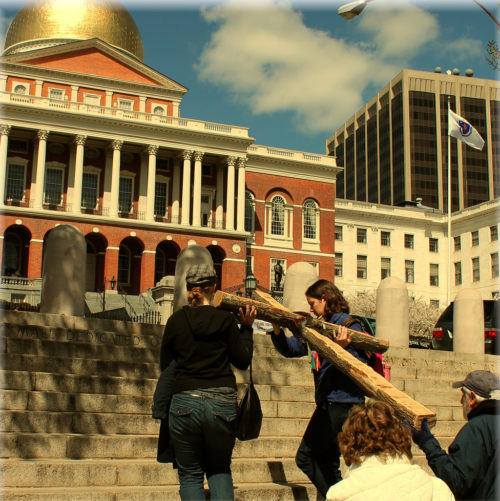 Occupy movement participants take part in stations of the cross on Good Friday at the Massachusetts State House. Photo/Michael Horan

[Episcopal News Service] With the dismantling of encampments at New York’s Zuccotti Park and elsewhere and the onset of winter, the Occupy movement dropped out of front-page headlines. But the movement against greed and economic inequality has continued unabated, supported by members of the faith community.

“It’s alive and well. I’ve never seen so much percolation going on. Just today there are four different meetings having to do with five different actions,” retired Episcopal Bishop George Packard said in a March interview with ENS.

“Actions” – from street theater to interruptions of foreclosure procedures by singing protestors to weekly Wall Street marches – occur frequently, chronicled on Occupy Wall Street’s Facebook page, website and elsewhere. Earth Day on Sunday in New York, for example, will bring a “jazz funeral for the death of Earth as we know it” and a march to the site of the proposed Spectra Pipeline in the West Village.

Faith groups in some cities led Lent or Easter events. In late March, two priests from the Episcopal Diocese of Long Island and the founder of Protest Chaplains in Boston traveled to Oakland, California, to participate in a national Occupy Faith gathering. And movement supporters around the country are planning a day of action, including a call for a general strike, for May 1.

“May Day is really going to kick off a whole series of actions that are going to go on this summer,” said the Rev. John Merz, priest-in-charge at the Episcopal Church of the Ascension on Greenpoint, Brooklyn. Leading up to that, every Friday or Saturday brings a march around Wall Street, he said. “There are sleeping bags in front of the [New York] Stock Exchange. There may even be attempts at various reoccupations, whether it’s Zuccotti or elsewhere. That may happen on a mass scale.”

May 1, he explained, is “traditionally a day when unions and disparate groups work together to stand up for workers’ rights and the rights of the disadvantaged in society.”

Packard, former bishop for the armed forces and federal ministries; Merz; the Rev. Michael Sniffen, priest-in-charge of the Episcopal Church of St. Luke and St. Matthew in Brooklyn; and the Rev. Earl Kooperkamp, rector of St. Mary’s Episcopal Church in Harlem, were among Occupy protesters arrested Dec. 17 after entering a fenced property owned by Trinity Episcopal Church, Wall Street, in Duarte Square in Lower Manhattan as part of Occupy Wall Street’s “D17 Take Back the Commons” event to celebrate three months since the movement’s launch.

Packard and Kooperkamp are due in New York Criminal Court April 20 on trespassing charges. Merz and Sniffen accepted a six-month adjournment in contemplation of dismissal (ACD) on Feb. 28, which means the charges against them will be dismissed and they will have no criminal record if they are not arrested again in the next six months, according to a court official.

Packard said he chose not to accept the offered ACD because “I elected to hear my charges from a judge and be able to respond to them.

“I didn’t go through all of this just to kind of go out the back of the court with my tail between my legs, he said. “I felt it was time to stand on my own two feet, look the gentleman in the eye [and] say, ‘This is what I did.'”

“I also probably will be arrested again,” said Packard, who has continued to participate in OWS actions in New York. “I’m not looking to be arrested, but the chances are pretty high.”

Packard’s wife Brook, who was not arrested Dec. 17 but said she feared for her life when police countered OWS demonstrators with force, has continued to be involved in the movement as well, including teaching protest songs to occupiers for the spring marches.

Merz also said he accepted the possibility of being arrested again. “I’m not worried about that. … I’ll be at demonstrations and I’ll be out on May Day, and if there’s an attempt at a reoccupation, I’m going to be there.”

Being in court brought another lesson in society’s inequities, Sniffen said. “Most of the people in the courtroom where I was were elderly Chinese and Latino women who had been arrested for selling flowers and candy on a street corner. I was just thinking about all of the gross injustices that surround us that many of us are fighting in the church and outside the church to overcome and that the justice system is clogged with people who are desperately trying to scrape a living together. It was really a surprise, and them being given $150 fines, which is probably more than they make in a couple of months.”

“I think it’s an indication that our justice system, along with many of our other systems, is also broken,” he said.

Involved from the start

Inspired by the Arab Spring, the Occupy movement was launched Sept. 17 with Occupy Wall Street. Demonstrators set up camp in Zuccotti Park and created a community with everything from an onsite lending library to working groups planning actions and statements on various social and economic concerns. Participants organized using “horizontal” rather than hierarchical leadership and made decisions at democratic “general assemblies.”

Episcopalians and other people of faith have supported the movement from the beginning. Harvard doctoral candidate Marisa Egerstrom organized a group called Protest Chaplains that participated in the launch at Zuccotti Park and has supported Occupy Boston. In New York, Episcopal clergy, including Diocese of Long Island Bishop Lawrence Provenzano and those arrested Dec. 17, spent time with occupiers at Zuccotti Park and have been involved with Occupy Faith NYC.

In late March, Occupy Faith members from across the country – including Merz, Sniffen and Egerstrom – attended a national planning meeting in Oakland, California, where members of various religious groups had maintained an “Interfaith Tent” at Occupy Oakland and 14 were arrested in November after refusing to evacuate that encampment.

The Oakland meeting included discussion about national coordination and actions, including what will happen May 1 and a push for a commission on debt and debt culture — “something along the lines of a truth commission around wealth and debt” — Merz said. But it also showed the challenges of a national strategy for a diverse movement.

Because there are so many Occupy groups at different stages of development, much of the conference focused on sharing experiences, identifying where the groups were in their development and discussing strategies, he said. Besides providing physical and logistical support, one area in which people saw faith leaders as potentially playing an important role is in direct actions, such as when Occupy Faith NYC members demonstrated in front of the governor’s office using beds to symbolize the impact of budget cuts on homeless people, he said.

Since the breakup of the occupations in New York and other cities, said Egerstrom, “the main development is that what used to be a very camp-centered movement has really … turned into collective, I guess, and that collective is made up of working groups and affinity groups who are all now pursuing various strategies but in communication with each other. So it actually looks more like movements we’ve seen in the past than it has previously.”

That, in turn, spurs the question: Will the movement dissolve into single-issue groups, “or are we going to continue to be something of a sustained popular uprising?” she said.

“In Boston, some of the Protest Chaplains have continued to do various actions,” she said. During Lent, for example, a group gathered every Friday morning outside Bank of America for prayers and music, “not only calling for repentance on the part of banks, but also for all of us to understand how we’re all locked into a system that rests on exploitation and greed.”

The Occupy Lent leaders included a Catholic, a Buddhist, a Unitarian, a Lutheran and emergent church Episcopalian. On Ash Wednesday, a UCC minister offered ashes. On Maundy Thursday, a group offered Eucharist and foot washing near a Boston Commons fountain. Good Friday brought a stations of the cross that drew 50 or 60 participants. In Philadelphia, Easter plans included a morning “Sermon at the Mall.”

“Occupy is almost mirroring so much of what gets discussed in sort of emergent church discourse,” Egerstrom said. “People don’t want statements or creeds or mission blurbs. … What matters is where you put your body and to what end.

“I think Episcopalians would say, ‘Well, it’s all fine and good if you say the creeds and you say that’s what you believe, but aren’t you going to show up to church? Aren’t we going to come together as a community and take part in the sacraments together and experience the sound of all our bodies and voices singing together, praying together?’ And Occupy has also come as a result of people being fed up with the insufficiency of things like signing online petitions, statements from people in positions of authority that don’t go anywhere.”

A need for conversation

Some conversations are taking place at Episcopal seminaries.

On April 27, Packard and the Rev. James Cooper, rector of Trinity, Wall Street, will participate in “Occupy Faith – Leadership for the 100%,” a forum focusing on faith and leadership in the Occupy movement, at Virginia Theological Seminary in Alexandria, Virginia. The event is the second in a series of forums sponsored by the Social Concerns Committee highlighting the ongoing impact of the movement.

In February, Packard, Merz, Smithen and Egerstrom participated in a forum at General Theological Seminary in New York.

In the larger society, although OWS’ encampment only lasted two months, references to the movement and issues raised by Occupy have “just become part of the vocabulary,” Merz said.

“We unconsciously and consciously perpetuate a lot of the institutional pillars in society, whether it’s family, law and order … Then we preach from the pulpit transformation,” he said. “Experientially, the church is a place that does not welcome transformation actually that openly and easily. You can’t move a pew without getting into an enormous fight.”

But, at least in New York, the movement has “pushed some churches into uncomfortable territory,” he said, stressing the need for continued conversations about economic justice and action.

May 1 will provide another opportunity, he said. “What will be the response to this? … How will churches respond and see ourselves as partners in pushing the society to answering the questions that we raise week in and week out from out from our pulpits?”

Looking outside the church, religious leaders have described a strong spiritual component to the Occupy movement and its encampments from the beginning, even if many participants aren’t religiously affiliated.

“The people I meet at OWS … they don’t know anything about institutional religion at all,” Packard said. “They are not less spiritual. They have a spirituality which is undeniable.”