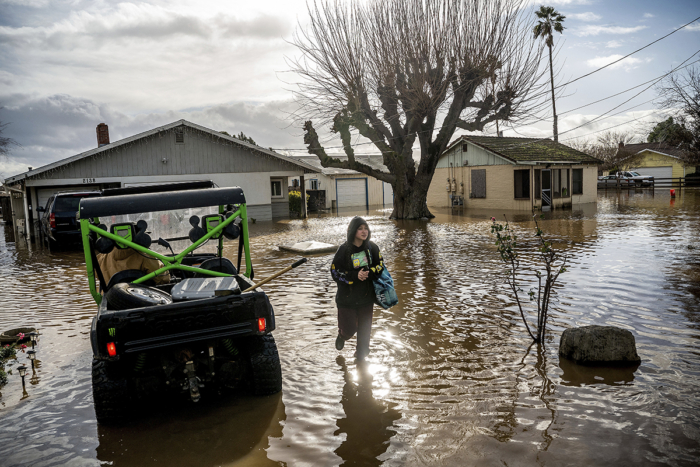 [Episcopal News Service] Episcopal congregations and dioceses across California are tending to damaged church buildings and helping their communities recover from an intense barrage of deadly rainstorms in recent weeks that has caused flooding, mudslides and power outages in the drought-stricken state.

California has been plagued for several years by low rainfall, which has fueled devastating wildfires up and down the state. Now the sudden surge in rainstorms is causing its own set of problems. Known as atmospheric rivers, the long, narrow moisture-bearing weather patterns have dropped more than half a year’s worth of rain in just over two weeks.

The already adverse conditions faced by homeless people in the area became dire when the storms hit, with “tents that are now sitting in standing water and RVs that are leaking and people getting literally flooded out,” the Rev. Stephen McHale, rector of Christ Church, told ABC 7 News. “It’s miserable.”

McHale said the church was using emergency funds to pay for food and resources and relying on a team of dedicated volunteers.

“It’s been painful to see so many people in a difficult decision,” he said, but “it’s been really inspiring … to see how much the community and volunteers have rallied.”

At Holy Child & St. Martin, the parish hall was flooded and the interior walls of the sanctuary sustained water damage. The city delivered sandbags to protect the church from further flooding.

In his sermon on Jan. 8, the church’s priest-in-charge, the Rev. Jureck Fernandez, noted the irony of the disruption caused by rain and floods happening at the same time as the church’s commemorations of the Epiphany and Jesus’ baptism.

“Have you ever experienced being caught off guard and [something] took you completely by surprise?” he asked. “Do you remember a day when your plan got messed up or interrupted? Like last Wednesday? Upon waking up, you don’t have power, no [hot] water, cannot take a shower.”

When Fernandez talked about Jesus being baptized in the river, he offered a clarification: “By the way, this is not what we call the atmospheric river, it’s the River Jordan.”

The back-to-back storms across the Golden State have killed at least 16 people, including two motorists who died early Tuesday in a crash on Highway 99, authorities said.https://t.co/RfK2mpyM7w

In the Diocese of Los Angeles, staff members have reached out to congregational leaders to offer assistance as needed. East of Santa Barbara in Montecito, All Saints-by-the-Sea Episcopal Church closed its doors, as well as its adjacent school, when the storm-threatened community was evacuated on Jan. 9.

Five years ago, the church served as a hub for emergency services when Montecito was hit hard by mudslides. This year, the storms so far have caused far less damage and disruption.

“There was some flooding and mud flowing, but no houses were destroyed. There were no injuries and no deaths,” the Rev. Hank Mitchel, interim priest at All Saints, told Episcopal News Service by email. He noted that the evacuation order was lifted Jan. 10 and schools reopened the following day.

And in the Diocese of El Camino Real, Episcopalians are praying for the family of a 5-year-old boy who was swept away Jan. 9 by a swollen creek as he and his mother tried to escape their flooded car. Authorities in San Luis Obispo County continue to search for the boy, Kyle Doan, as his parents hold out hope for his return.

“We’re trying to help her in some pastoral care,” Díaz said in a phone interview.

St. Mark’s sits on higher ground and has not been threatened by flooding. The congregation has offered space for local authorities to use as an emergency shelter if it is needed. “We are open for any kind of emergency,” Díaz said.

No damage has been reported at El Camino Real churches so far, Communications Director Carole Bartolini told ENS. “We’re waiting to see how we do in the next storm this weekend. The ground is so saturated that it doesn’t take much to start flooding,” she said by email.

The recent storms are blamed for nearly 20 deaths. More rain is in the forecast heading into the weekend, but the new storms aren’t expected to be as severe.