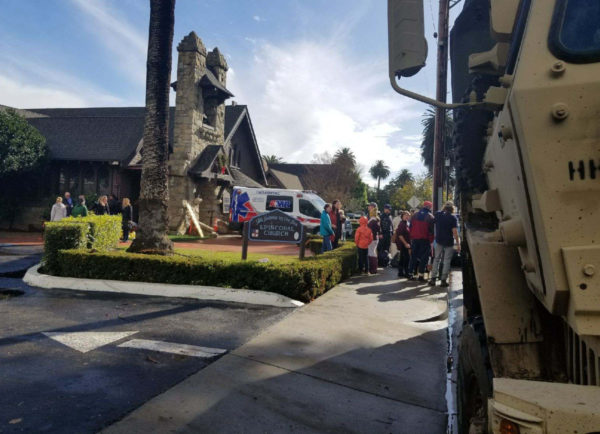 A California National Guard Humvee is parked outside All Saints-by-the-Sea Episcopal Church in Montecito, California, where the church was being used this week as a triage center for paramedics and as an evacuation site by the National Guard. Photo: All Saints

[Episcopal News Service] Sunday worship services at All Saints-by-the-Sea Episcopal Church proceeded as scheduled on Jan. 7, as a storm loomed in the forecast.

Since then, deadly mudslides and flooding have turned life upside-down in Montecito, California. At least 17 people are dead, and this tight-knit oceanside community south of central Santa Barbara is under a mandatory evacuation order as emergency crews search for survivors and victims, restore utilities and begin cleaning up the mud and debris that damaged and destroyed homes in their path.

All Saints was spared the worst of the damage but has no power or phone service, and the natural gas was shut off to allow repair crews to begin their work, said Sheri Benninghoven, a parishioner who has led communication efforts for the congregation. The parish’s school is closed, and worship services are canceled until further notice.

The work of the Lord continued this week, however, as the church grounds became a triage center for people injured in the disaster, and Benninghoven said church leaders estimated hundreds of people descended on the church during the heart of the emergency – Tuesday, Wednesday and Thursday – seeking medical help and, eventually, evacuation assistance from the California National Guard, which staged operations from All Saints.

“I think we’re all somewhat in shock. I think a lot of people are doing things based on adrenaline,” Benninghoven told Episcopal News Service by phone. “This is stunning and remarkable for everybody. This community has been hit really, really hard, and we will always think back to this week and no one will ever be the same.”

Authorities issued the first of the evacuation orders for parts of Montecito on Jan. 7 anticipating the rains that posed a thread of mudslides from the water cascading down the mountainside on the northern edge of this unincorporated community of about 9,000 people. The threat of devastation was heightened this winter because of the damage done by the Thomas Fire, which last year grew to become the largest wildfire in California’s history.

The fire stopped short of Montecito, but with the ground cover in the higher elevations cleared and charred by the blaze, conditions were ripe for disaster when rain started falling Jan. 8 and early Jan. 9.

Before sunrise Jan. 9, authorities started receiving 911 calls from Montecito residents trapped in their homes by the mud flows, Benninghoven said, and since All Saints’ neighborhood was on the south side of Highway 101 and out of the path of the flows, it became a gathering place for first responders and victims.

“Those rescuers couldn’t get those victims outside the area, so they brought them down to All Saints,” she said. 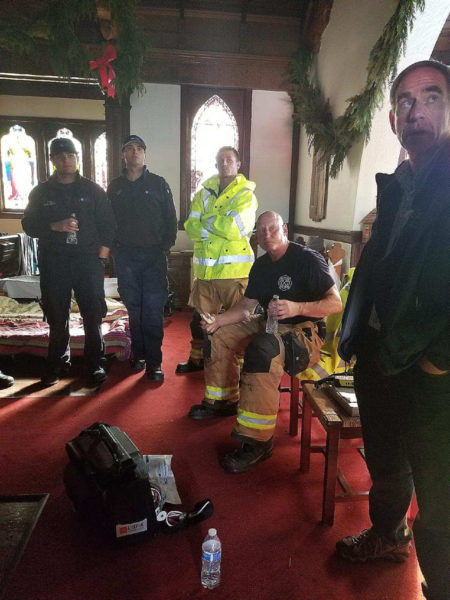 First responders gather at All Saints-by-the-Sea, which served as a temporary triage center for residents of Montecito, California, who were injured in the mudslides. Photo: All Saints

The Rev. Aimee Eyer-Delevett, the rector, lives on the grounds with her wife, and they began early Jan. 9 assisting evacuees. They opened the parish hall as a place for residents to rest and clean themselves up. The church had some food in a fridge, and they boiled water for coffee.

The injured were taken to the nave of the church to be attended to by paramedics. Helicopters were able to land on church grounds and take those who were severely injured to a hospital in Santa Barbara.

Because people living near the church were isolated and could not get to safe places, the church became “a safe place and a rallying place” for those people, said the Rev. Michael Bamberger, a member of Episcopal Relief & Development’s Partners in Response team and the disaster coordinator for the Diocese of Los Angeles.

A doctor happens to live in a rental house on the church campus, and she was called in to help treat people.

“God puts people in the places that they’re supposed to be,” Benninghoven said.

Because the neighborhood was now surrounded by mud and Highway 101 was impassable, people could not get in or out, but church leaders conducted regular conference calls to coordinate efforts and communications. Benninghoven, safe at her home in Santa Barbara, took the lead in posting information and updates for the congregation on its website and Facebook page and through regular emails to parishioners.

She and other church leaders also reached out to residents in the neighborhood, asking them to help any way they could, and dozens of them showed up at the church with food, blankets and clothes.

“You just want to cry,” Benninghoven said. “It was really just remarkable. It touches your heart. … They were serving as God’s hands and feet. It’s what we learn about on Sundays, and they just knew it was what their job was on this particular day.” 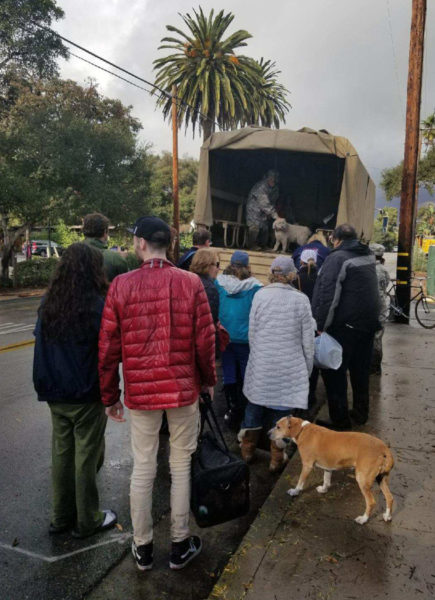 Residents of Montecito, California, prepare to climb into a military vehicle as part of evacuations after mudslides devastated the community next to Santa Barbara. Photo: All Saints

Residents at All Saints loaded onto military transport vehicles and were taken about four miles northwest to a shopping center in Santa Barbara, from which they could then proceed to a Red Cross shelter at Santa Barbara City College or find their own temporary accommodations.

Eyer-Delevett and her wife left to stay at a home in Santa Barbara, and other church leaders also have followed the order to evacuate. They left the parish hall open for some neighbors who chose not to flee, but otherwise, church operations have shut down since the National Guard wrapped up its evacuations from All Saints late Jan. 11.

The evacuation order is expected to be in effect for one or two weeks, but the church is hoping to reopen sooner, once Highway 101 is cleared.

Church leaders also are looking ahead to providing pastoral care for victims of the mudslides, many of whom lost their homes. Of the 17 fatalities, none has been identified as an All Saints parishioner, though it was not yet possible to determine if parishioners are among the five unidentified people who authorities said were still missing as of Jan. 12.

Benninghoven said the congregation, with about 1,000 members, has been assembling lists with the location of as many as they can. The congregation is “cautiously optimistic” that all will be confirmed alive, she said, but parishioners are still profoundly affected by the tragedy of so many dead neighbors. “That is hitting everybody very, very hard,” Benninghoven said.

Bamberger said the diocese, with the help of Episcopal Relief & Development, is supporting relief efforts in the area. And they are looking toward what will be a long recovery time. In late February, clergy and lay leaders in the fire- and flood-affected areas will meet for a day of “spiritual debriefing,” Bamberger said.

Montecito is a wealthy community. The average annual income in 2016 was $138,872, according to the U.S. Census Bureau, and it is home to such celebrities as Oprah Winfrey, Ellen DeGeneres and actor Jeff Bridges. However, the Rev. Melissa McCarthy, Los Angeles canon to the ordinary, told Episcopal News Service via telephone early on Jan. 12 that disasters such as this touch everyone.

Some people have more resources, including insurance, but “nothing can spare them from the emotional trauma of this,” McCarthy said. 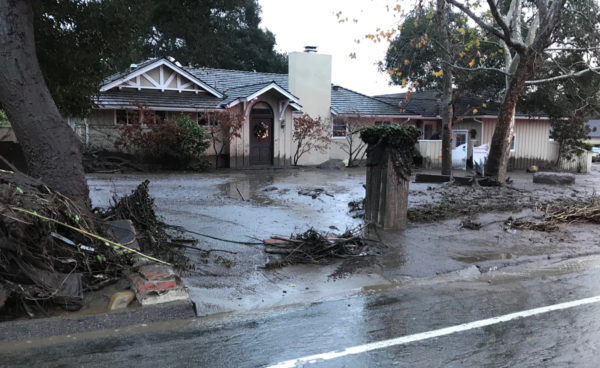 Mud covers the yard and cakes the side of a home in Montecito, California, after rains sent rivers of dirt and debris down the mountainside and into the community on Jan. 9. Photo: All Saints

And, Montecito has workers in its restaurants and residents’ homes who “when their town shuts down, they are the people who suffer.”

McCarthy said the diocese especially wants to help the most vulnerable people in the aftermath of the floods. They include homeless people, the working poor (including some clergy members, she said) who live paycheck to paycheck, and “anybody who is afraid to go ask for resources and help, particularly undocumented people.”

Bamberger said the diocese is continuing to use an assets-based community development approach for discerning a congregation’s potential ministries to meet the needs of its surrounding communities, including after disasters. They ask, “Where is the church already being the church, doing the work of the church, and how can we help them be even more effective?”

– The Rev. Mary Frances Schjonberg is interim managing editor of the Episcopal News Service. David Paulsen is an editor and reporter and can be reached at dpaulsen@episcopalchurch.org.