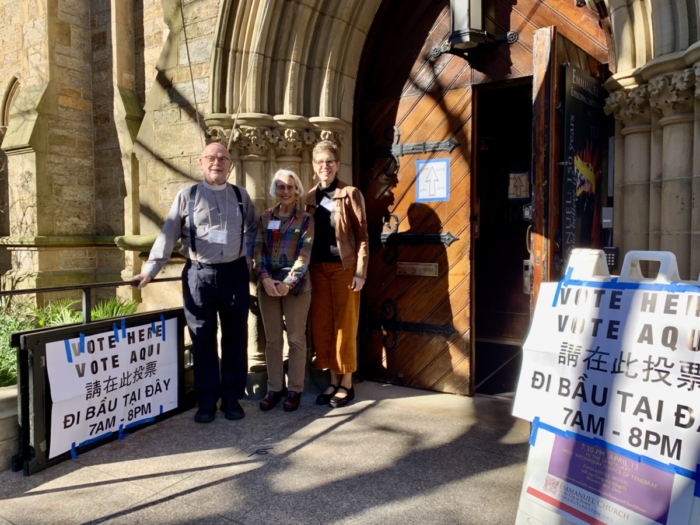 [Episcopal News Service – Boston, Massachusetts] Emmanuel Episcopal Church in downtown Boston, a 161-year-old landmark across the street from the Public Garden, is renowned for its music, architecture and contributions to local and national history. But every Election Day, it also plays a prosaic but crucial civic role as the polling place for Ward 5, Precinct 6.

Emmanuel is among dozens of Episcopal churches serving as voting locations in the U.S. midterm elections on Nov. 8. Though Emmanuel has been a polling place for many years, the Rev. Bob Greiner told Episcopal News Service, this Election Day is a little different.

Greiner – who serves the parish as a deacon – and a few other church leaders were stationed by the door and around the building to serve as guides and greeters, something they hadn’t done before. And in the nave, a cellist performed for hours, entertaining anyone who wanted to sit and enjoy the space. It was all part of an effort to make the building more welcoming to all who use it, especially on a day as stressful as this, they said. 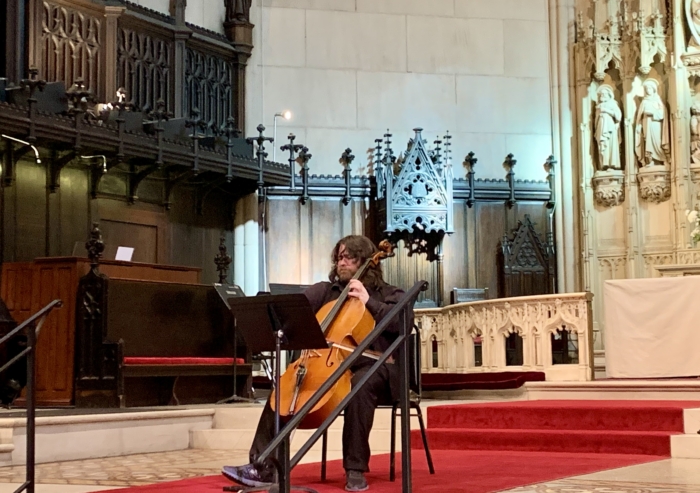 “We thought, if they’re going to be here voting, what a great time to welcome people to the church,” seminarian Lisa Faber Ginggen told ENS.

Usually, just the sextons are on hand as the election officials set up and run the polling place, Greiner said. But on Nov. 8, they were joined by Greiner, Faber Ginggen and Senior Warden Liz Levin, who gave voters a warm welcome and directed them to the voting booths.

“I think hospitality means meeting people where they are when they come in,” Faber Ginggen said. “Some people are a quick hello, some people have stopped and talked. Some people wanted to visit [the sanctuary].”

With high-stakes elections that could determine the future of American democracy taking place nationwide and concerns about voter intimidation and violence, Emmanuel was an oasis of calm on Nov. 8. Having few controversial or close races this year, Massachusetts is relatively insulated from the turmoil afflicting states like Arizona, Georgia, New Hampshire and Pennsylvania, where Republican candidates who supported overturning President Joe Biden’s 2020 election are in close gubernatorial and Senate races.

None of that was visible as people filed in and out of the church, either to vote in the parish hall or to attend the regular Alcoholics Anonymous meeting upstairs. There were no lines and the greeters said there had not been any problems. The sound of Rafael Popper-Keizer’s cello performance wafted in from the nave, where a few people were listening from the pews. 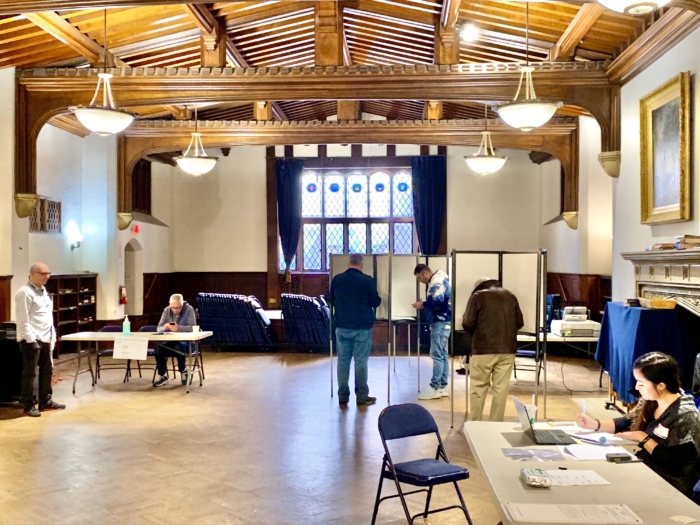 The idea of having greeters and Popper-Keizer – who regularly plays in the church’s weekly Bach cantata performances – had emerged during vestry meetings as a way to put people at ease.

“One of the tenets that we try to follow here is radical welcome,” Levin said. “So this falls right into that.”

The Episcopal Church and many of its dioceses and congregations are encouraging Episcopalians to support nonpartisan voter engagement efforts this election season. The church’s Washington, D.C.-based Office of Government Relations urges Episcopalians to “Vote Faithfully” with the help of resources outlined in its election engagement tool kit. Presiding Bishop Michael Curry and House of Deputies President Julia Ayala Harris will be among the featured guests in an Election Day prayer event, which will be livestreamed from 8 p.m. to midnight Eastern Nov. 8 on the church’s Facebook page.

The greeting crew emphasized that their presence has no political or partisan purpose; they have no significant interaction with the election officials in the voting room. But Greiner said the simple act of being welcomed into a polling place can reassure voters who might be nervous or skeptical about the integrity of the election process.

“When people come in and we say, ‘Welcome, we’re glad you’re here,’ I think it makes each person feel as if their vote does count,” Greiner told ENS. “I think that’s probably the best thing.”