[Episcopal News Service] When the Rev. Diane Tomlinson voted on Nov. 3, she didn’t have to leave her church.

Emmanuel Episcopal Church, where Tomlinson is rector, provides space in its second-floor Nicholas Center to serve as an early-voting site in Rockford, Illinois. The congregation remains nonpartisan and doesn’t get involved in running the polls, but Tomlinson told Episcopal News Service she thinks it’s important for Episcopalians to get involved in the electoral process. 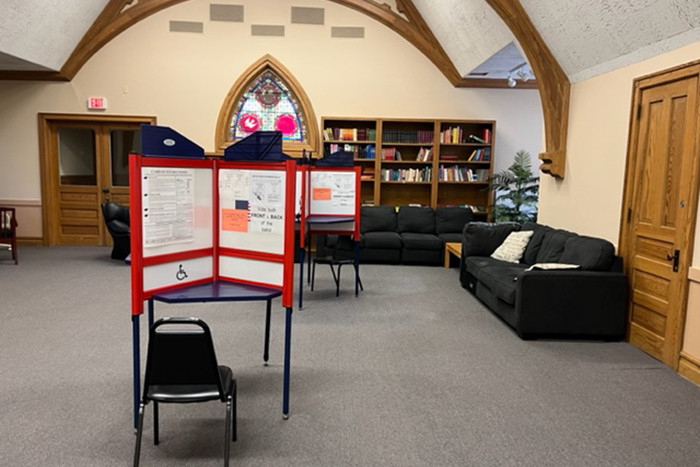 Kiosks are set up in a room at Emmanuel Episcopal Church in Rockford, Illinois, for voters to fill out their ballots during early voting. Photo: Diane Tomlinson

“It’s part of our duty as Christians, to be a part of the conversation,” she said. “By voting, we are able to register what we believe.”

The Episcopal Church and many of its dioceses and congregations are encouraging Episcopalians to support nonpartisan voter engagement efforts this election season. Some congregations, like Emmanuel Episcopal Church, also are opening their doors as physical resources for their communities, serving as polling places during early voting and on Election Day, Nov. 8.

In Cherry Hill, New Jersey, residents in districts 26 and 33 vote at St. Bartholomew’s Episcopal Church, one of numerous churches in Camden County that are offering space for polls this election. Churches also make up a large number of the polling places in Manatee County, Florida, along with government buildings, libraries and country clubs. St. Mary Magdalene Episcopal Church in Lakewood Ranch will welcome voters of Manatee County’s Precinct 523 on Election Day.

And in California’s Diocese of El Camino Real, St. Timothy’s Episcopal Church in Mountain View will open its Edwards Hall as a Santa Clara County polling site, starting with early voting on Nov. 5 and running though Election Day.

This isn’t a presidential election year, but voters in the United States will be electing or reelecting members of Congress. Many states also have U.S. Senate races and gubernatorial elections on the ballot, along with other state and local elections. The church’s Office of Government Relations urges Episcopalians to “Vote Faithfully” with the help of resources outlined it its election engagement toolkit.

Presiding Bishop Michael Curry and House of Deputies President Julia Ayala Harris will be among the featured guests in an Election Day prayer event, which will be livestreamed from 8 p.m. to midnight Eastern Nov. 8 on the church’s Facebook page.

Some Episcopal churches regularly serve as polling places for their communities, either during early voting, on Election Day or both. In the Diocese of West Texas, St. Francis by the Lake Episcopal Church in Canyon Lake is serving as an early-voting location for Comal County, and it again will open its Great Hall for voters on Election Day.

In Southwest Florida, damage caused by Hurricane Ian upended plans to welcome voters in Naples’ Precinct 462 at St. John’s Episcopal Church. Since the storm, the congregation at St. John’s has been worshiping on its patio, while repairs are underway inside the church. Election officials were forced to move the polling site from St. John’s to nearby Moorings Presbyterian Church.

In the Diocese of Chicago, Rockford voters began voting on Oct. 19, with Emmanuel Episcopal Church serving as one of the polling locations in the northern Illinois city. Early voting continues there through Nov. 7.

One reason the church is a good choice for a polling station is its accessibility features, including an elevator. Tomlinson said the church, in providing space, does not promote its faith to voters. “We want all voices at the table, and we want people to feel the church is a safe place,” she said.

The church’s sexton unlocks the building in the morning for poll workers and locks up at the end of the day. Otherwise, the space is in the hands of election officials. They were quite busy on Nov. 3, Tomlinson said, when 46 voters came to cast their ballots at the church. Turnout was even higher two years ago.

“When we had the presidential early voting in 2020, people were lined up down the street,” she said, “which made me feel really good.”