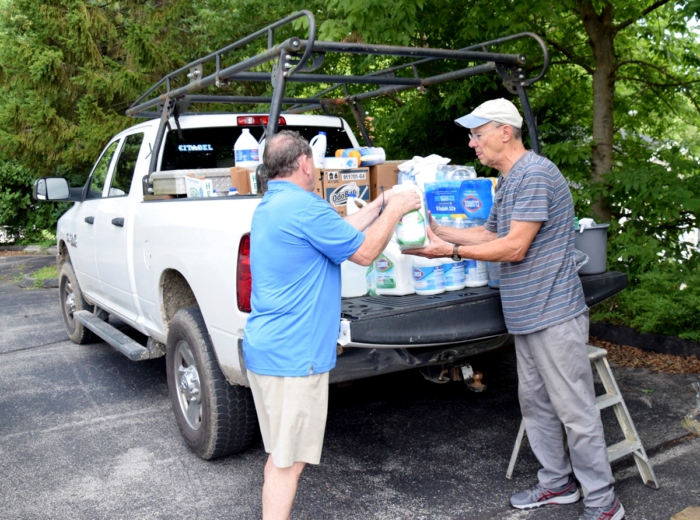 Volunteers in Lexington help load a truck with cleaning items bound for victims of floods in southeast Kentucky. Photo by Bryant Kibler

[Episcopal News Service] For the second time in two years, the Diocese of Lexington is responding to the needs of residents reeling from flooding caused by heavy rains. This year counties in southeast Kentucky were hit with record-level rains July 25–30; last year flooding affected the northeast area of the state.

Heading the latest relief efforts is the Ven. Bryant Kibler, archdeacon for the Mountain region, who oversees 10 churches in the southeast corner of the diocese. It is an area of Appalachia that is marked by a poverty rate of more than 25%. Kibler said the area is made up of communities built in valleys and hollows of the Appalachian Mountains, and many were hit hard when torrential rains ran down the steep mountain slopes.

“It was like a tsunami washed houses away,” he told Episcopal News Service. “Vehicles were stacked up like cookies on a cookie sheet.” Multiple bridges were swept away by raging waters, leaving communities cut off and requiring some people to be rescued by National Guard helicopters, he said.

There are Episcopal churches in the towns that were hit hard, Kibler said, but none of them sustained any flood damage, since they were built on higher ground. He said he knew of only three families associated with those churches whose homes were damaged.

Many others weren’t so lucky. According to an Aug. 7 tweet by Kentucky Gov. Andy Beshear, 37 people have been confirmed dead with two others still missing. He added, “The devastation is enormous.” The good news is that for all but 300 locations, power has been restored.

But, Kibler said, the flooding left homes filled with mud. Many water systems in the area were knocked offline, leaving people without water for drinking or flushing toilets, let alone for cleaning out their homes.

“Some expect it may be a month or more before people will have water again,” he said. He noted that a local pharmacy has donated a large quantity of the antihistamine Benadryl, because mold has started to form in saturated homes, causing allergy symptoms to skyrocket.

A request from the diocese for cleaning supplies and paper goods filled a trailer that Kibler took from the diocesan office in Lexington to affected areas on Aug. 4, and he expects to make more deliveries in coming weeks. But while he said some local people are providing hands-on help, now is not a good time for those outside the area to come, unless they receive prior approval and are part of a group that is prepared to be completely self-sufficient, as there is no way to house or feed anyone at this point.

But what people can do is give money, Kibler said, so he can give gift cards to people to spend on the supplies they need. The diocese already has received donations of more than $23,000, but Kibler said more is needed. Episcopal Relief & Development also sent aid designated for gift card purchases.

A trailer is partially loaded with paper towels and other paper supplies for use by people whose homes have been damaged by flooding in southeast Kentucky. Photo by Bryant Kibler

The Ven. Laurie Brock, archdeacon of the Bluegrass region, told ENS that she is urging her parishioners to give money to help fellow Kentuckians. It may seem simple, she said, but giving money “is the best way to help.” She added that it not only gets aid to people faster, it also is empowering. “It’s presumptuous to think you know what somebody needs,” she said.

The Diocese of Kentucky, which covers the western part of the state, has provided some financial support for flood relief efforts, Amy Real Coultas, canon to the ordinary, told ENS. The diocese also continues to help people in its communities who were hit hard by tornadoes in December 2021.

Kibler said the area of flooding will have massive needs for “several years,” long after the floods are out of the news or the next disaster has hit. Noting that just two weeks ago he had delivered supplies to a home damaged by last year’s flood, “there’s long-term work that will need to be done,” he said.