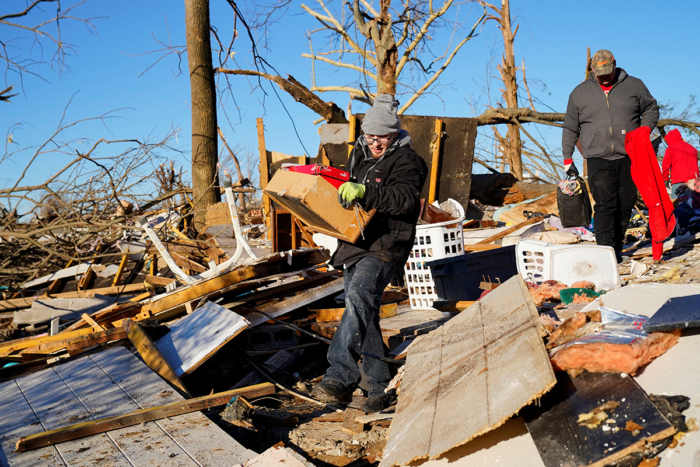 Jeremiah Barker, 37, on Dec. 13 retrieves belongings from the pile of debris where his home once stood in the aftermath of a tornado in Mayfield, Kentucky. Photo: Reuters

[Episcopal News Service] Episcopal leaders and church members are working with their communities to provide disaster relief and assistance to areas affected by the powerful storm system overnight Dec. 10 that produced deadly and destructive tornadoes across a wide swath of the central United States.

Communities in western Kentucky were among the hardest hit. At least 64 people there were killed in the storms, Gov. Andy Beshear said in an update on Dec. 13, and more deaths were reported from the tornadoes that ripped through parts of Arkansas, Illinois, Mississippi, Missouri and Tennessee.

“As we continue getting updates from around the diocese, we want to thank you for the incredible outpouring of support from around the church—our neighboring dioceses and dioceses around the country, and caring people from literally around the world have been in touch,” the diocese said. It also encouraged donations to its Bishop’s Discretionary Fund and the state government’s relief fund.

Some of the worst destruction was found in Mayfield, a city of about 10,000 people about a half hour south of Paducah. The tornado leveled a Mayfield candle factory where an estimated 110 people were working, raising fears of mass casualties. At least eight people died in the factory, though the latest updates suggest most workers survived the disaster.

That tornado reached wind speeds estimated as high as 206 mph along a path that stretched more than 200 miles, according to state and federal authorities.

No Episcopal churches are located in Mayfield. Some of the congregations in surrounding communities offered their support, including St. John’s Episcopal Church in Murray, southeast of Mayfield.

“We are praying for all those affected by the tornados and storms, especially the people of Mayfield,” St. John’s Episcopal Church said in a Facebook post on Dec. 11. The storms had knocked out power to St. John’s.

Bowling Green, Kentucky, was another community hit hard overnight Dec. 10 by a tornado, which killed at least 12 people, leveled homes and left a shocked and battered community to pick up the pieces.

The Rev. Steve Pankey, rector at Christ Episcopal Church in Bowling Green, told Episcopal News Service in a phone interview that the tornado cut its path of destruction mere blocks from his home. From his porch he said he can see where neighbors lost roofs or sections of their homes in the storm, which packed winds estimated at 155 mph.

The homes of two members of his congregation were destroyed, while about a dozen other members reported lesser damage, such as roofs blown away or falling trees hitting the structures. The power remains out for much of the city, Pankey said, but no one in the congregation was killed or seriously injured.

“Yesterday, in a sort of big empty parking lot, there were just dozens, if not hundreds, of pick-up trucks and folks unloading chain saws and trash bags, whatever they could, and walking into the affected neighborhood and helping people,”Pankey said. Members of his congregation also spent part of the day clearing and sorting through debris with one of the parishioners whose homes were destroyed.

“It’s been pretty awe-inspiring, seeing the community come together,” said Pankey, who also serves on The Episcopal Church Executive Council.

Christ Episcopal Church didn’t lose power, but its internet and phone services had yet to be restored as of Dec. 13. The congregation, meanwhile, was raising money online for its clergy discretionary fund to be used for disaster relief.

For her Dec. 12 sermon, the Rev. Rebecca Kello, associate rector at Christ Episcopal Church, sought solace in the words of the prophet Zephaniah: “You shall fear disaster no more.”

“Many of us woke without power after a restless night of sheltering from the tornado that has racked our town,” Kello said, according to text of the sermon posted to her blog. “Those of us who were unharmed realized the depth of devastation and disaster that our neighbors faced as they lost everything.”

A tornado that touched down in Monette, Arkansas, killed one person and injured five at a nursing home while damaging other buildings in the small northeastern city near the Missouri state line. The few Episcopal congregations in that part of the state reported no injuries or building damage, according to the Diocese of Arkansas officials.

“We are currently checking on families in the Monette-Leachville area with whom we have relationships and will determine the best ways we can assist them once we know more,” communications director James Matthews told ENS by email on Dec. 13.