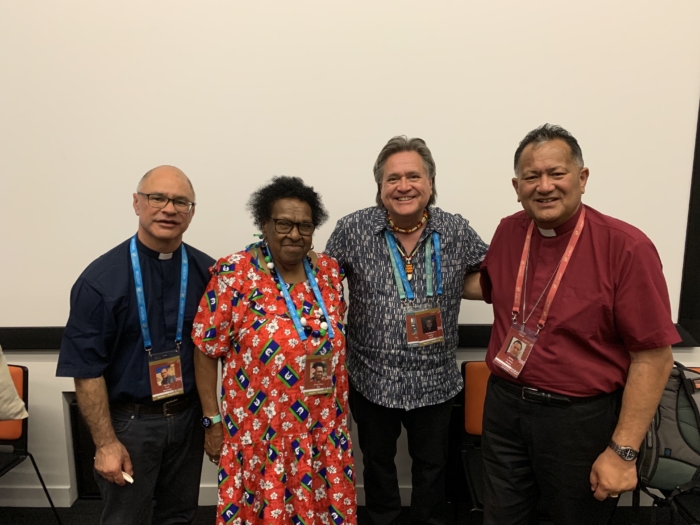 [Episcopal News Service – Canterbury, England] Indigenous leaders from The Episcopal Church and across the Anglican Communion presented their perspectives at a Lambeth Conference seminar on Aug. 1, describing the specific challenges they have faced in their regions but also the importance of embracing Indigenous wisdom and theology to solve problems that affect everyone.

Members of the Anglican Indigenous Network also introduced an Indigenous encyclical they had compiled, putting the injustices they faced in a theological perspective, along with the church’s moral responsibility to address them.

Hauff showed part of a video made by his office, “Speaking to the Church and the World,” in which Indigenous Episcopalians talk about their resilience amid intergenerational trauma, especially from residential schools. Some participants had attended the schools, which separated thousands of Indigenous children in the U.S. and Canada from their families, in many cases damaging their cultural connections and subjecting them to abuse. Hauff also discussed the experience of his father in a residential school.

The Episcopal Church, through its involvement in the U.S. government’s effort to assimilate Native Americans, operated at least nine and perhaps as many as 18 residential schools, Hauff said.

He also presented The Episcopal Church’s ongoing efforts to address the injustices perpetrated against Indigenous peoples. The church repudiated the “doctrine of discovery,” the basis for colonizing and assimilating Indigenous peoples, in 2009, and accompanied Native protestors at Standing Rock in North Dakota in 2016. In July, approved the creation of a commission to investigate the church’s complicity in the residential school system.

“Indigenous people in The Episcopal Church were very, very pleased that that has finally happened after all these years,” Hauff said. “There is much healing work to be done. And the process for that healing work, I’m pleased to say, is beginning.”

The Episcopal presentation also briefly touched on the climate crisis and its unique impact on Indigenous peoples. The erasure of Indigenous cultures is intertwined with the destruction of the natural world on which they depend, said the Rev. Rachel Taber-Hamilton, newly elected vice president of the House of Deputies of The Episcopal Church, in the video. Taber-Hamilton, a member of the Shackan First Nation, is the first Indigenous person to hold the role.

“We have Indigenous communities that are really, truly on the brink of extinction that is concurrent with species extinction,” she said.

Other seminar participants presented their personal experiences with the impacts of climate change, including Rose Elu, a member of the Anglican Indigenous Network Steering Group from the Torres Strait Islands. The low-lying islands between Australia and Papua New Guinea are acutely affected by flooding, with seawater intruding on homes and infrastructure even on calm-weather days. Recently, she said, it has even reached one island’s cemetery.

“People spent so much money for their loved ones to lay to rest [and] the high tide washed away the graves on the island,” she said. “People are saying, ‘God is telling us something.’ There’s so much interruptions. So much is happening in the world, on the land and on the ocean. It takes away the sustainability of our people. It takes away the freedom of our people. Now, who’s listening?”

The time for arguing about the climate crisis is long over, she said, and urgent action is needed.

“I don’t want to waste my time talking,” she said. “Each and every one of you is really looking at us, but I do not know how much you are capturing inside your head, how much you’re taking into your heart.

“I hope, [though] this presentation is disheartening, that we take away something, our homework, to be able to work with it and enlarge it in the four corners of the world and bring us all together one day.”

One part of that homework may be the Indigenous encyclical that the network has developed. The document is called “He Wero: Tahitahia Tō Tātou Whare,” which means, “A Challenge: Let’s Sweep Our House.” It relates, presenters said, both to the shared duty of caring for the planet and the internal work that churches need to do on reconciling and healing from its treatment of Indigenous peoples. It includes reflections (including some from Episcopalians), Indigenous spiritual concepts and theological resources such as Biblical expositions.

“This resource unpacks our story as Indigenous people of faith and includes a list of theological reflective questions at the end that intend to provoke thought and in discussion,” said the Rev. Paul Reynolds, secretary of the Anglican Indigenous Network.

Reynolds added that the encyclical is a work in progress and expressed a desire to see more Indigenous people on Anglican Communion theological and liturgical bodies.

Correction: An earlier version of this story mischaracterized the status of the Indigenous encyclical.