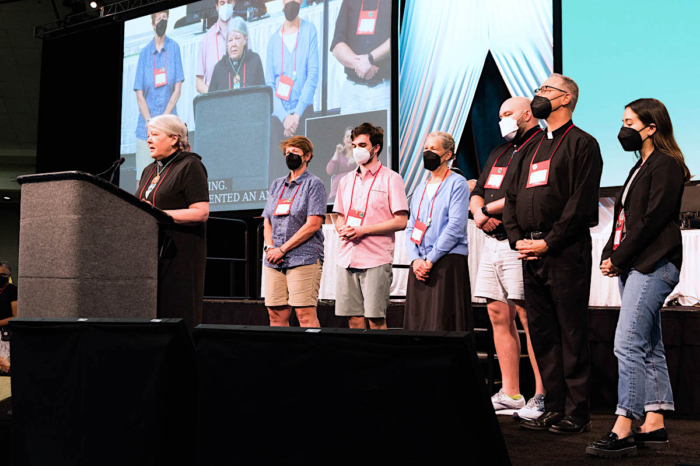 Olympia Deputy Rachel Taber-Hamilton addresses the House of Deputies July 10 after being elected as its vice president. The rest of the Olympia deputation joined her on the platform. Photo: Scott Gunn

[Episcopal News Service – Baltimore, Maryland]  The House of Deputies on July 10 elected the Rev. Rachel Taber-Hamilton as its vice president. She is the first ordained woman, and only the third woman, to serve in this capacity since the role of deputies’ vice president was created in 1964.

Taber-Hamilton, who is Shackan First Nation, joins President-Elect Julia Ayala Harris, a Latina lay woman from the Diocese of Oklahoma, will be the first people of color serving together as leaders of the House of Deputies. Their elections mark the first time two women will lead the house.

Taber-Hamilton is an Indigenous priest in the Diocese of Olympia, and she succeeds the Hon. Byron Rushing, who has served since 2012. The other candidate was the Rev. Edwin Johnson of Massachusetts.

After her election, Taber-Hamilton was joined on the platform by other Olympia deputies as she was greeted by the house with a standing ovation.

She said, “I’m looking forward with such joy and such humble gratitude to being able to be in a position to support the work of the House of Deputies, to care for all of you, and assure that every voice may be brought to bear. I also have such a deep commitment to supporting our [newly-elected] president Julia [Ayala] Harris, and the continued development of our lay ministers in the church, who I believe will be a significant aspect of our adaptive future.”