Here’s a roundup of “other” news.

What does a bishop do when his vestments are stuck in airline purgatory? If you are Georgia Bishop Frank Logue, you accept a favor from a friend.

In Logue’s case, this was no ordinary friend. Presiding Bishop Michael Curry let Logue borrow his purple cassock for the Lambeth Conference’s opening Eucharist on July 31 at Canterbury Cathedral while Logue waits for updates from Delta Airlines on the status of the garment bag that was lost in transit.

Curry “is, we all know, the sort Jesus follower who would give you the shirt off his back,” Logue said in a Facebook post. “My brother in Christ insisted that I wear his cassock, which would usually be under the rochet and chimere he wore. This is just who he is, and I am grateful to him.”

Episcopal News Service caught up with Logue later in the day outside the venue at the University of Kent where the bishops had just completed their latest Lambeth Calls discussion on safe church practices. Logue was back to wearing his purple shirt and white collar. His more formal vestments still are nowhere to be found.

Logue explained that he and his wife were traveling with two suitcases and a shared garment bag. The garment bag likely was lost during their layover at the airport in Amsterdam, Netherlands, on their way to a pre-conference pilgrimage to Scotland. Logue’s wife suitcase also failed to make it to Scotland with them, though it was delivered three days later.

The Logues aren’t alone in their baggage woes. There have been widespread reports of travelers losing bags this month, particularly those who flew through Amsterdam. A “major disruption of the baggage system” at the airport may be to blame, the airline KLM said in announcing it would temporarily stop accepting checked luggage on flights through the city.

Missing with Logue’s garment bag are the ceremonial rochet and chimere that bishops typically wear on formal occasions, as well as his stoles and a mitre. That left him somewhat underdressed on July 29 for the official group photo of all the over 650 Anglican bishops attending this conference.

Logue told ENS his Plan A was to pray that Delta came through. That plan has failed so far. Plan B was to ask his assistant to send a backup set of vestments once worn by a predecessor, the late Georgia Bishop Henry Louttit Jr., but that package got caught in customs.

“Plan C was to be at peace about it,” Logue said.

Rhode Island Bishop Nicholas Knisely also lost luggage during a stop in Amsterdam, Logue said, and attended the opening Eucharist on July 31 in a suit. Logue would have worn a suit too, but Curry, who had been checking in with Logue, offered his own cassock. Logue gratefully accepted. “It felt nice to be vested,” he told ENS.

As the conference progresses through Aug. 8, it is anyone’s guess whether the airline will come through and deliver the missing garment bag, but as Logue said, “we all live in hope.” 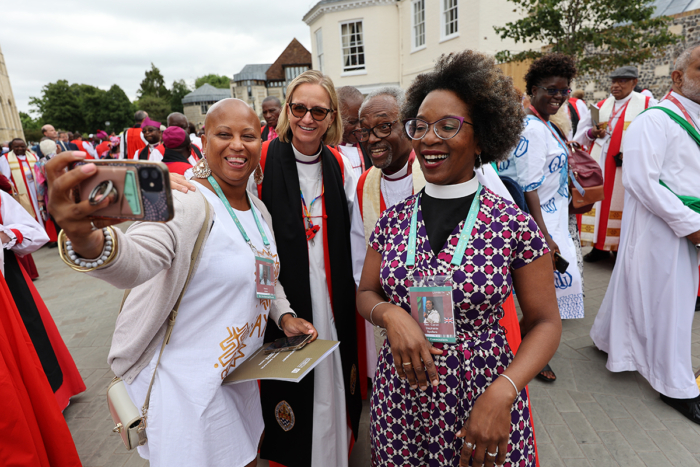 Following the 15th Lambeth Conference’s opening service at Canterbury Cathedral, retired El Camino Real Bishop Mary Gray-Reeves and Presiding Bishop Michael Curry posed for a photograph with Sharon Jones, executive coordinator to the presiding bishop, who is holding the phone, and the Rev. Stephanie Spellers, canon to the presiding bishop for evangelism, reconciliation and creation care.