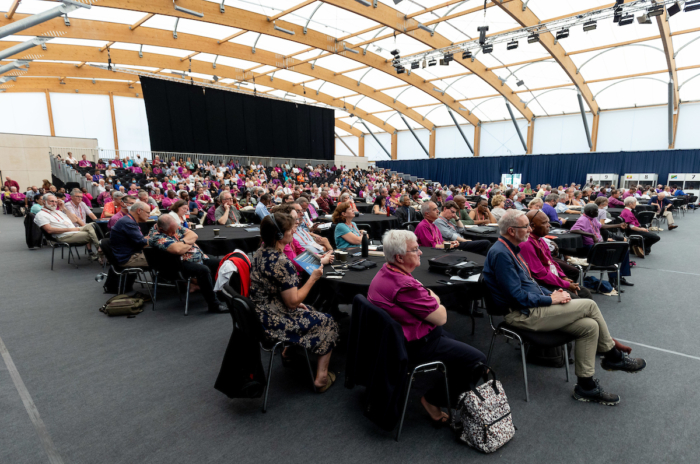 [Episcopal News Service – Canterbury, England] In the second Lambeth Conference plenary session, primates, bishops and other church leaders talked about how to prevent and heal from abuse in the church, and how to create a common culture of safety across the variety of cultural contexts that make up the Anglican Communion.

After hearing from Safe Church administrators, Archbishop of Canterbury Justin Welby, and a victim of clergy sexual abuse, the bishops considered the draft Lambeth Call on Safe Church, which commits provinces to a plan for preventing and addressing abuse. Accepting that the specifics may be tailored to each province or diocese but the principles need to be shared, the bishops approved the draft call to move forward to its final phase, when it will be revised to include feedback that they have provided.

In the plenary, Welby said the problem of abuse in the church “has been the biggest, most powerful burden of this role that I’ve faced over the last 10 years.”

Abuse, he said, is not limited to any region, culture or context – although “it is largely a problem of men.”

“The fundamental issue of Safe Church is the misuse of power. It’s not even, normally, particularly about sex. It’s about power – the ability of someone to do what they like with someone who is weaker,” he said.

Garth Blake, chair of the Anglican Communion Safe Church Commission, provided an overview of the progressive steps the communion has taken to prevent abuse in any form – including sexual, emotional and spiritual abuse – in churches. At the 2008 Lambeth Conference, “the abuse of power within society and the church and its disproportionate impact on women and children” emerged as a theme that generated guidelines and recommendations over the next decade.

In 2012, the Anglican Consultative Council adopted the Charter for the Safety of People within the Churches of the Anglican Communion, encouraging all provinces to take on its five commitments: providing pastoral support where there is abuse; effectively responding to abuse; teaching methods of safe pastoral ministry through education and training; assessing the suitability of potential church leaders through background checks and other methods; and promoting a culture of safety to prevent abuse.

That charter is the basis for the ACC’s creation of the Safe Church Commission in 2016. The ACC endorsed a protocol for provinces to share information about the suitability of potential ordinands or lay leaders for ministry. The protocol suggests a framework for provinces to report instances of proven abuse, or credible allegations, so that potentially abusive clergy or lay leaders cannot continue ministry in another province.

The ACC adopted a further set of guidelines in 2019, developed by the Safe Church Commission, for churches to enhance the safety of children and vulnerable adults in the provinces of the communion. The ACC requested that each province adopt and implement the charter, protocol and guidelines at the 2019 meeting.

The draft Call on Safe Church would affirm that provinces commit to taking all of those steps, implementing them in a way that suits their local context.

Bishop Tim Thornton, chair of the Lambeth Calls Subgroup, said at an evening news conference that the bishops had “assented to the call unanimously,” though the process they are using to register their approval or disapproval has changed. For the first call on July 30, bishops used electronic voting devices to submit one of three possible responses to the Call on Mission and Evangelism.

However, Thornton said, based on feedback from bishops, the conference will no longer use the devices. Instead, bishops will discuss the drafts in small groups, up to six of which will be randomly selected to present their thoughts verbally during the session. Then they will be asked to affirm or object by voice, and if there is a clear consensus that the call should move forward, it will advance to a final draft incorporating all the bishops’ feedback.

Thornton clarified that there will not be a numerical count of votes. When asked what would happen if there is not a clear consensus, Thornton cited Welby as saying that “if the majority are saying no, in effect, then the call will not be taken forward, and the work will be noted, but it won’t go forward to the next phase.”

The guidelines and protocols that the Safe Church call affirms do not prescribe specific actions or rules, and that is by design, said Blake, the Safe Church Commission chair.

“Why ‘guidelines’? Because of 165 countries and all those different legal systems, we cannot have a prescriptive set of rules. But we can have guidelines which need to be contextualized to each province, and we tested the suitability of those guidelines through a broad membership on the commission throughout all parts of the world. And part of my role as chair was to say, ‘This draft of the guideline, does this work in your province?’”

Bishop Cleophas Lunga of the Diocese of Matabeleland in Zimbabwe, part of the Church of the Province of Central Africa, said being able to implement the guidelines in a locally relevant way was critical, partially because legal and procedural systems in Zimbabwe often don’t correlate easily with those in other parts of the world.

“We are now, as the province of Central Africa – and I’m sure other provinces in Africa will follow us in suit – to begin to use the guidelines that we have managed to put together, so that they can be adapted to our context, and include the parts that we’ve [already been] using, to make the whole safeguarding measures comprehensive,” he said. “So this is a welcome idea.”