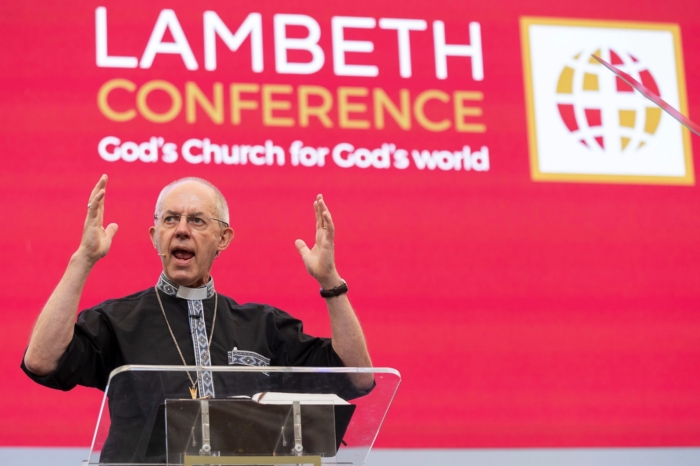 [Episcopal News Service – Canterbury, England] The business portion of the Lambeth Conference got underway on July 30 as more than 650 bishops from across the Anglican Communion gathered at the University of Kent for Bible studies, presentations on mission and evangelism and a collective endorsement of a statement on those topics of the day.

Archbishop of Canterbury Justin Welby, who convened the conference, chose the New Testament letter of 1 Peter to provide its biblical foundation. In the morning session, Welby offered the conference’s first Bible exposition, underscoring how the reading from Scripture finds the early Christians seeking hope through their belief in Jesus during a time of exile and persecution.

Among the key themes found in 1 Peter, Welby said, are power and authority, hope and suffering, holiness, displacement and hospitality. “Although the world in which we live is completely different to that of Peter in the first century and although the world has shifted on its axis in the last 10 years with COVID and other things, the message of 1 Peter is absolutely still relevant,” Welby said. “For many of us, Peter touches on difficult topics, and we are not going to skip them. We’re going to talk about them.”

The Lambeth Conference, though typically held once a decade, last met 14 years ago in 2008. Welby’s chosen theme for this gathering is “God’s Church for God’s World,” and the first day’s plenary session, on mission and evangelism, turned the focus outward, with a call to offer Jesus’ good news to the world, like a gift for those open to hearing it.

But conference planners also have been aware of the need to look inward to address often seismic divisions within the Anglican Communion. Welby acknowledged the church’s fault lines in his reflections on 1 Peter.

“We are united in our hope, in our love for Jesus absolutely,” he said. “But as a church – in common, by the way, with every global church – we are also divided, by the assumption that the key themes of 1 Peter mean the same for everyone, that my suffering is exactly the same as your suffering. But it is not.”

The threat of persecution is a particularly consequential difference in how Anglicans around the world experience their faith, Welby noted. Belief in Jesus can be a matter of life and death in some provinces. “In this hall, many live in places of persecution, some of it violent and open, some of it slightly better concealed,” he said. “And it is difficult for those who do not experience persecution to understand the reality of the recipients of this letter.”

Theological divisions over human sexuality also have flared at this Lambeth Conference, as they did at the previous two, with conservative bishops now pushing for endorsement of their own resolution affirming majority opposition to same-sex marriage.

Welby has stressed that the Lambeth Conference is not a legislative or governing body. And, though he avoided direct mention of the controversy during his Bible reflections, Welby urged bishops to join in listening, learning and “walking together” out of a shared love for God, despite their disagreements.

“The call to us across the whole catholic church – the global church; I’m not just talking about Anglicans – is to stop our civil wars. There are enough in the world without having them in our church,” he said. “When we are one in Christ … divisions are rubbed of power. The power of Christ overcomes all that seeks to alienate, to fragment, to make for fear.

“We may be disparate. We are divided. But we have a common identity that is over everything, that we belong to Jesus Christ.”

He concluded by asking the bishops: “What is the good news that you bring to this gathering?”

Planners of this Lambeth Conference, from July 26-Aug. 8, instituted a “Lambeth Calls” process in lieu of resolutions, partly in recognition that neither Welby nor the Lambeth Conference has authority over its 42 member provinces, including The Episcopal Church. After daily discussions, the Lambeth Calls reports are to be finalized with a consensus-building process similar to voting, though planners have preferred not to describe it as a vote.

After discussing the draft version of each of the Lambeth Calls, bishops will be given electronic devices to indicate their view in one of three ways: “This Call speaks for me,” “This Call requires further discernment” or “This Call does not speak for me.”

The Lambeth Call on Mission and Evangelism was taken up July 30 as the first of the conference’s 10 calls, opening the conference on a unifying note. The draft text of the call includes the declaration: “Every church across the Anglican Communion joyfully shares this vocation to declare the good news of God’s salvation of the world in Christ Jesus.”

The afternoon sessions in which the bishops discuss the calls are closed to the public and to reporters, though the Lambeth Conference released results of the first discussion later in the day. The call was endorsed by two-thirds of about 450 participating bishops, with another third favoring further discernment. It was not immediately clear why not all bishops attending the Lambeth Conference registered their views.

The topic also was developed during an open plenary earlier in the day, featuring the Church of England’s Archbishop of York Stephen Cottrell and Archbishop Tito Zavala of the Anglican Church of Chile.

If McDonald’s makes hamburgers and Cadbury makes chocolate, Cottrell said, “the church of Jesus Christ makes disciples. That is our core business.”

“What the world needs is what God has lavished upon us in Christ,” Cottrell said. It needs hope, and it needs reconciliation. It needs humility in the face of the damage done to the environment, he said, evoking what will be a major theme later in the conference. “What the world needs is the knowledge that peace can be found even with disagreement.

“And dear sisters and brothers, isn’t this a particular opportunity before us this week? We can show the world that despite profound disagreement, what we have in Christ is love.”

Zavala spoke of his experience emphasizing church planting in Chile, as a priest and now as archbishop. “Our God – Father, Son, Holy Spirit – is a missionary god,” he said, and church planting isn’t a calling that God is saving for us in heaven. It is the necessary work of Christians here on Earth, he said.

Zavala also argued that Anglicans worldwide need to shift from being primarily maintenance-minded and work toward becoming a mission-minded church, always seeking new opportunities for growth. Much mission-minded work is led by the laity, he added, echoing a common refrain in The Episcopal Church about the importance of empowering lay leaders.

“We have not been called by God to close churches. We have been born to plant churches,” he said while describing his work expanding a congregation in Santiago that eventually grew to spin off new congregations established by some of the initial congregation’s members. From that experience, his province has developed a “mother church” model for starting new congregations.

From the beginning of any newly formed congregation, Zavala prompts the local leaders to consider: “What will be your next church planting project?”

The plenary session closed with an encouragement among bishops to discuss briefly with those sitting next to them how such a calling is experienced in their local contexts, tying in Welby’s earlier emphasis on the importance of learning from each other’s stories.

Bishop Jacque Boston of the Diocese of Guinea in the Province of West Africa, speaking with Episcopal News Service, described how the local context can differ significantly just within his own diocese, even as his diocese and province worlds apart in some ways from what many other Anglicans and Episcopalians experience.

Boston’s country is overwhelmingly Muslim, so the Anglican Church faces strong resistance from most of fellow citizens to Christian appeals, he told Episcopal News Service. Christians in some parts of the country also suffer discrimination for their beliefs, he said. He doesn’t fear persecution personally, partly because he is based in the southern part of the country, which is more tolerant of the minority Christians.

“It’s very difficult,” he said, adding that the Anglican diocese also struggles with lack of resources to support evangelism efforts.

The draft Lambeth Call on Mission and Evangelism includes 10 specific requests that bishops will be encouraged to take back to their dioceses. Several of them require no financial commitment, allowing them to transcend disparities in resources among Anglican provinces. “Each diocese and every church to seek fervently to be renewed by the wonder and power of the good news of Christ,” the first request says. Another calls on Episcopalians and Anglicans to discern “how to bear faithful witness to Christ and authentically proclaim the Gospels.”

Prayer plays a large role. “We pray for each other in this ministry and commit to listen to, learn from and find encouragement together in this Call,” one of the items says.

Other parts of the Call on Mission and Evangelism identify more tangible actions, such as training and deploying evangelists, and the final item asks the Anglian Communion’s secretary general “to support and monitor progress in these areas with the help of the Commission on Evangelism and Discipleship.”