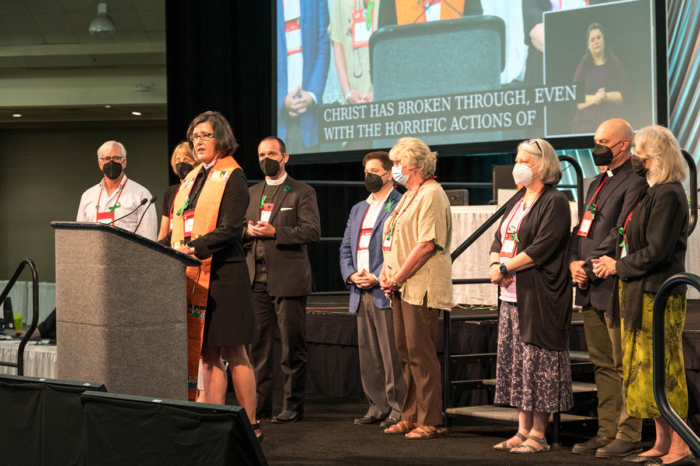 The Rev. Candice Frazer, chair of the deputation from the Diocese of Alabama, addressed the House of Deputies July 8 on Resolution A226, which honors victims and survivors of the June 16 shooting at St. Stephen’s Episcopal Church in Vestavia Hills, Alabama, as the other Alabama clergy and lay deputies stand by her side. Photo: Scott Gunn

Editor’s note: This story was updated July 8 at 4 p.m. EDT with action in the House of Bishops.

[Episcopal News Service] At the end of its morning session on July 8, members of the House of Deputies rose in unanimous, silent affirmation of Resolution A226, to recognize, honor and lament the three members of St. Stephen’s Episcopal Church in Vestavia Hills, Alabama, who were murdered June 16 by a man who was attending a potluck supper at the church. The resolution also recognized the surviving 18 church members and friends who were there that night.

Clergy and lay deputies from the Diocese of Alabama, led by deputation chair the Rev. Candice Frazer, walked to the podium at the front of the House of Deputies’ chamber, and Frazer began by quoting John 1:5: “The light shines in the darkness, and the darkness does not overcome it.” She noted that the church’s rector, the Rev. John Burruss, in his sermon the Sunday after the shootings, called the actions of the parishioners in reaching out in hospitality to the man who then turned and shot them not heroic, “but Christian.”

Frazer said the victims – Bart Rainey, Sharon Yeager and Jane Pounds – acted out of love and would have done so again, “just as Jesus does for all of us, again and again and again.” In giving their lives, she said, “they witnessed to the glory of God, shining the light of Christ for all the world to see.”

The Alabama deputies all wore green ribbons, with Frazer noting that after the shooting, similar ribbons appeared around Vestavia Hills and nearby Birmingham in solidarity with the church. She said green was the color St. Stephen’s uses in its logo, representing its commitment to creation care. Frazer also thanked everyone who had sent messages, cards and prayers in support of St. Stephen’s and the Diocese of Alabama.

The resolution came to the House of Bishops early in its afternoon session, with Alabama Bishop Glenda Curry addressing the house with members of the Alabama deputation on the dais with her. She said that on July 7 the church “began to reclaim the space in the parish hall where this happened, with the people that were there three weeks ago.” She added that the families of those killed were there and they reminded everyone present that love overcomes hate. Curry added, “And that is what we’re going to do. We’re going to love, and we’re going to keep welcoming.”

The bishops then paused for a time of silent prayer, which Presiding Bishop Michael Curry later called the House of Bishops’ vote in favor of the resolution.