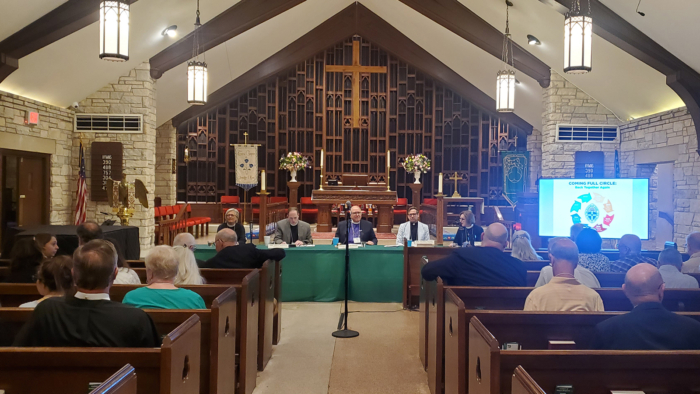 Bishop Scott Mayer presides June 18 at a special meeting of the North Texas Diocesan Convention to vote for a reunion with the Diocese of Texas. Photo: Episcopal Church in North Texas

[Episcopal News Service] A planned merger of the dioceses of Texas and North Texas is heading to the 80th General Convention in July for final approval after North Texas leaders backed the plan unanimously June 18 at a special meeting of their diocesan convention.

The 69-0 vote in the Fort Worth-based diocese follows a nearly unanimous vote on June 9 in favor of the merger by the Diocese of Texas’s Diocesan Council. The merger is following a process known as reunion, since both dioceses have roots in the historic Diocese of Texas.

“This event today is not about closure. It’s an outward visible sign of faith, hope, and love by a liberated people,” Northwest Texas Bishop Scott Mayer, who also serves as bishop provisional of North Texas, said in his sermon for the opening worship service at the June 18 meeting.

The North Texas diocese, with 14 congregations and fewer than 4,000 members, was greatly diminished in membership by a 2008 schism, in which a majority of clergy and lay leaders in the Episcopal Diocese of Fort Worth voted to leave The Episcopal Church over disagreements about the ordination of women and LGBTQ+ people.

In May 2020, the Texas Supreme Court sided with the breakaway group, now aligned with the Anglican Church in North America, or ACNA. In February 2021, the U.S. Supreme Court announced it wouldn’t review the case, letting ACNA’s victory stand, and in April 2021, the rest of the Episcopal diocese’s congregations were ordered out or chose to move out of the buildings that had been awarded to ACNA.

“You did more than weather the storm,” Mayer said in his sermon. “You did more than survive the journey.  You chose life and love. You gave away your money, your time, and your security for the benefit of others. The communities and people you serve can testify that your presence and witness matters in this world.  You make a difference. And you are great.”

Reunions normally require only the consent of a majority of bishops and diocesan standing committees of The Episcopal Church, but because this reunion is happening so close to the 80th General Convention, the House of Bishops and House of Deputies will be asked when they meet July 8-11 in Baltimore, Maryland, to approve the reunion in lieu of bishops’ and standing committees’ consent.

The Diocese of Texas is one of the largest in The Episcopal Church, with 167 congregations and 72,000 members. It already has two bishops suffragan and a bishop assistant, each assigned to a different region of the diocese. North Texas would become the diocese’s fourth region.

“We are waiting and so excited for this day and eager to begin our work together in a more formal way, already our staffs are working together to understand the ministry and mission that we will hopefully soon share,” Doyle said. “My words of promise, my words of hope, my words of endearment and love for you are backed by the people of this diocese.”

The reunion of the two dioceses has been proposed to the 80th General Convention as Resolution D050, which is assigned to the bishops’ and deputies’ committees on Governance and Structure. A hearing on the resolution is scheduled for June 24. If recommended by the committees, it will be taken up by the full houses in Baltimore.