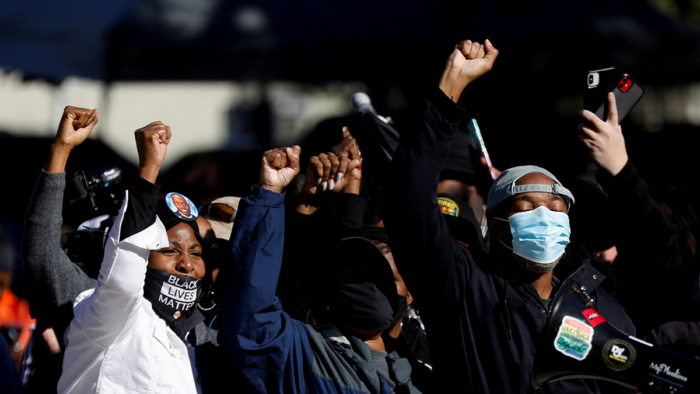 [Episcopal News Service] Three white men on Nov. 24 were found guilty of murder in the February 2020 killing of Black jogger Ahmaud Arbery, a case that has been at the center of a broader reckoning with racial injustice in the United States.

“Any verdict arrives too late to offer true justice in this case. Ahmaud Arbery is dead, and the court cannot return him to his family. Nonetheless, this moment is an important one,” Georgia Bishop Frank Logue and Atlanta Bishop Rob Wright said in a joint statement released with Bishop Kevin Strickland of the Evangelical Lutheran Church in America. “We hope not just for good to overcome evil, but for God to redeem even the worst tragedies and the gravest injustices. While the court has acted, the work of healing and justice remains.”

Bishop Logue, together with Bishop Wright of the Diocese of Atlanta and Bishop Strickland of the ELCA Southeastern Synod issued a joint letter in response to the verdict in the McMichael-Bryan trial.

Curry echoed those points in his statement after the verdict: “While nothing will return Ahmaud Arbery to his loved ones, our justice system has held three men accountable for hunting down and killing a Black man who did nothing but go for a run in a predominately white neighborhood, and I give thanks for this outcome. My prayers are with Arbery’s family as they continue to grieve his loss.

“Even so, our work as followers of Jesus, as a church, and as a nation, continues.”

Protests erupted nationwide and globally in late May 2020 after the killing of an unarmed Black man, George Floyd, by police in Minneapolis, Minnesota. Those protests also focused on other recent killings of African Americans by police officers and white vigilantes, including Arbery in Glynn County, Georgia, and Breonna Taylor, who was killed in her Louisville, Kentucky, home in March 2020 by police executing a search warrant.

Derek Chauvin, the former Minneapolis officer who pressed his knee into Floyd’s neck for more than nine minutes, was convicted by a jury on April 20, 2021, on three counts of murder and manslaughter. He was sentenced two months later to 22 1/2 years in prison.

In Louisville, the U.S. Justice Department is investigating the police department’s practices after Taylor’s killing. The department’s internal investigation concluded that the two officers whose gunshots killed Taylor should never have fired their weapons.

On Nov. 24, the Glynn County jury convicted Gregory McMichael; his son, Travis McMichael; and a neighbor, William Bryan, on several counts, including murder, in the death of 25-year-old Arbery. Gregory McMichael, a former investigator for the local prosecutor’s office, told police that they had chased Arbery in a pickup truck and shot him after suspecting him of being tied to recent break-ins in the area.

While nothing will return #AhmaudArbery to his loved ones, our justice system has held three men accountable for hunting down and killing a Black man who did nothing but go for a run in a predominately white neighborhood, and I give thanks for this outcome.

“We cannot rest until these modern embodiments of terror against any human child of God are no more,” Curry said in his statement. “We must labor on for racial healing and reconciliation in each of our hearts — and in our society. We must reimagine and advocate against systems, laws, and policies that encourage vigilantism and diminish human life, because all people should be treated with the dignity, love, and respect that is due children of God.”

Much of the scrutiny on the Arbery case focused on how long it took authorities to charge the suspects. The three defendants weren’t arrested until early May, more than two months after the killing, when cellphone video surfaced appearing to show Travis McMichael shoot Arbery with a shotgun. Bryan, who had joined the McMichaels in confronting Arbery, recorded the shooting with his phone camera.

“The three men who are now convicted of crimes were initially shielded from facing their accusers in court,” Logue, Wright and Strickland said in their written statement. “Until we can bring equity to the system that initially protected them, the rest of us will not have done what we can to create the just society for which we long.

“Our country has not dealt with the racism built into the system at its founding and perpetuated until this day. Living into our faith means addressing directly any sin we see in our lives and in our communities. Divisions around the human-made concept of race are an offense against our faith which teaches that all people are made in God’s image and likeness. Jesus taught us to love God and love our neighbor as ourselves. Through his parable of the Good Samaritan, Jesus made it clear that all are our neighbors. Any racial divide breaks the heart of God.”

Last month, local Episcopal leaders were part of an interfaith group of about 75 clergy members from Glynn County who began regularly appearing outside the courthouse, starting with jury selection on Oct. 18. They continued to gather in small groups outside the building during the trial in a ministry of prayer and to promote peace and unity.

In their post-verdict message, the bishops from Georgia praised the Glynn County clergy members: “Their clarion call for justice after the video surfaced was critical in getting attention to this case. They followed this call by engaging in candid conversations that drew them together even as other forces could have deepened divisions.”

Upon hearing the news Nov. 24 that the verdicts were about to be read, several of those clergy members gathered outside the courthouse to pray, including the Rev. DeWayne Cope, rector of the nearby St. Athanasius’ Episcopal Church in Brunswick. Various groups of people were huddled there around cellphones to watch video of the trial’s outcome.

“You could hear shouting and cheering. They started chanting [Arbery’s] name,” Cope told ENS by phone later in the afternoon. “But there were also tears that were shed as well. People were just thankful a decision was reached, and for those gathered outside the courtroom a majority of those have been in support of Ahmaud Arbery’s family.”

It was a moment of release, Cope said, after weeks of anxiety that had been building during the jury selection and trial.

Cope added that he feels mixed emotions now that the trial is over. “There’s a little bit of happiness; for so many seeking justice, that was rendered today, yes.” But faith leaders still face the long-term work of healing a community that “is still fractured,” he said, and “there are other families involved that are still broken”: both the Arbery family and the families of his killers.