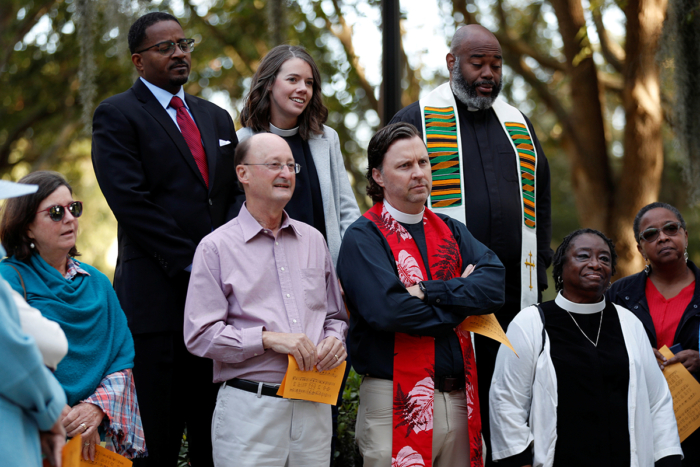 Worshippers and clergy gather to pray in front of the Glynn County Courthouse in Brunswick, Georgia, on Oct. 18. Among them are the Rev. Willetta McGowen, second from right; the Rev. DeWayne Cope, third from right; and the Rev. Tom Purdy, fourth from right. Photo: Reuters

[Episcopal News Service] Episcopal clergy and other local faith leaders are leading a daily ministry of peaceful witness and prayer outside the Glynn County Courthouse in Brunswick, Georgia, during the trial of three white men charged in the Feb. 23, 2020, killing of Black jogger Ahmaud Arbery.

About 75 clergy members are connected to the interfaith group, Glynn Clergy for Equity, which began forming last year amid the initial public outcry over Arbery’s killing. Last month, they began regularly appearing outside the courthouse when jury selection commenced on Oct. 18. Now, with the trial getting underway, about 15 members came to pray Nov. 5 before lawyers delivered their opening statements. They will continue to gather there throughout the trial.

“We want to be able to provide a presence at the courthouse, showing a sense of solidarity and unity,” the Rev. DeWayne Cope, rector of St. Athanasius’ Episcopal Church in downtown Brunswick, said in an interview with Episcopal News Service earlier in the week.

The national outrage over Arbery’s killing became part of a broader reckoning in 2020 with racial injustice, especially the killings of unarmed African Americans by police officers and white vigilantes. Much of the scrutiny on Glynn County focused on how long it took authorities to charge the suspects. Gregory McMichael, a former investigator for the local prosecutor’s office, and his son, Travis McMichael, told investigators that they had chased Arbery, 25, in a pickup truck and shot him after suspecting him of being tied to recent break-ins in the area. They weren’t arrested until early May, after cellphone video surfaced appearing to show Travis McMichael shoot Arbery with a shotgun.

The McMichaels now are standing trial on murder charges, along with a neighbor, William Bryan, who had joined the McMichaels in confronting Arbery and recorded the shooting with his phone camera. The trial is expected to last two weeks.

The Rev. Willetta McGowen, a deacon at St. Mark’s Episcopal Church in Brunswick, is among the members of Glynn Clergy for Equity who have regularly gathered outside the courthouse for the past three weeks during jury selection. She told ENS she wants to show her support for Arbery’s family. “It’s really been a roller coaster for them,” McGowen said.

“One of his aunts, she’s really angry, and I really can’t blame her. She doesn’t understand how this could have happened, especially in Brunswick. Her family has just been so painfully impacted, and she just couldn’t understand why these three men would have wanted to kill their nephew. He’s just jogging in the neighborhood.”

Glynn County clergy members united in responding to the case nearly from the beginning. On the day of the arrests in May 2020, 29 local religious and civic leaders, including six Episcopal priests, issued a statement lamenting “the tragic and senseless loss of a precious human life.”

“We know of no explanation for this lack of justice,” they wrote. “The failure of leadership within the Glynn County Police Department to immediately refer this case to the Georgia Bureau of Investigation is a stain on our community. Our elected officials must not accept the status quo. It is time for positive change.”

Cope was not a part of the group at the time, as he was serving at St. Paul’s Rock Creek Episcopal Church in Washington, D.C. He took over as rector as St. Athanasius’ in July 2020. In an interview with ENS, he acknowledged initially feeling apprehensive about facing a potentially tumultuous atmosphere in Brunswick, but the community’s solidarity reassured him.

“Everybody was really trying to come together and say that hopefully nothing like this should have to happen again and changes need to be made here in Brunswick, Georgia,” Cope said.

Since the murder, voters have replaced the district attorney who faced criticism for her handling of the Arbery case. She was defeated in the November 2020 election. And in July 2021, Glynn County hired its first Black police chief.

Churches and synagogues can play an important role in engaging the community in difficult conversations on race, McGowen said, but faith leaders first had to expand their own awareness of the racial divide. “First we had to understand each other,” she said.

The clergy members took steps toward establishing a more formal coalition in fall 2020, under the working name Glynn Clergy for Equity, and decided to seek help in fostering conversations within their congregations and the community.

“We needed to do a better job of building relationships across some of the things that divide us, namely race,” the Rev. Tom Purdy, rector of Christ Church Frederica, told ENS. Christ Church is a mostly white Episcopal congregation that worships just east of Brunswick on St. Simon’s Island.

The Diocese of Georgia gave $10,000 to the effort, out of the $75,000 approved in July 2020 by The Episcopal Church Executive Council to support the diocese’s racial reconciliation efforts. “This has permitted us to not only further the work in Glynn County, but to more broadly engage the diocese in the work of racial reconciliation and justice,” Georgia Bishop Frank Logue said in a written statement to ENS for this story.

The diocesan money helped the clergy group hire Dietra Hawkins, an Atlanta-based racial equity consultant, who in October 2020 began leading the group in a series of online discussions on identifying the roots of oppression, understanding power dynamics, recognizing racial micro-aggressions and fostering dialogue in the community to promote racial healing.

Though the Zoom sessions were limited to clergy members, the goal was to follow up with a plan to “bring this down to the congregation level,” Purdy said. Inspired by the trainings, the group held three “equity dinners” this year, at which clergy and members of their congregations were encouraged to discuss their experiences with racism and inequality.

The first was held in person on June 24 at Temple Beth Tefilloh, a Jewish synagogue in Brunswick, and drew a mix of Black and white attendees. Some white participants said they had not been fully aware of the racism and discrimination that continue to affect African Americans, said Cope, whose church is predominantly Black.

“You don’t know how bad it is until you hear some of these stories that are still happening,” Cope said. “What happened to Ahmaud was not a blip on the radar.” Though not always violent or deadly, instances of racial injustice “are happening to people on a daily basis.” 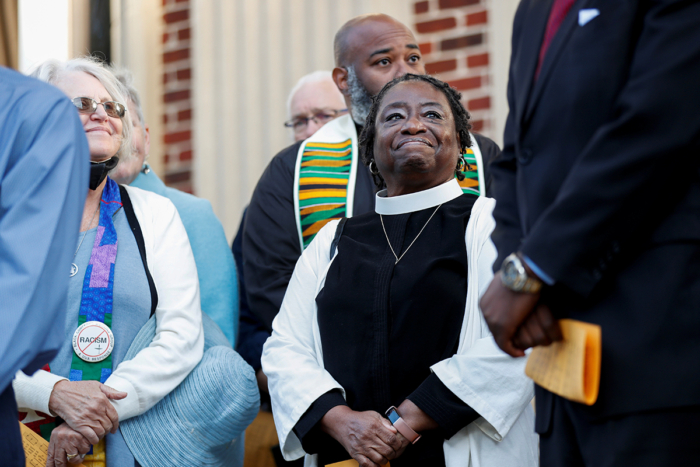 The Rev. Willetta McGowen, a deacon at St. Mark’s Episcopal Church in Brunswick, Georgia, is among the clergy who have appeared regularly outside the Glynn County Courthouse since jury selection began Oct. 18 in the trial of three white men charged with murdering Ahmaud Arbery. Photo: Reuters

McGowen, a 70-year-old native of Brunswick, said she was surprised by the disconnect she heard in white perceptions of everyday Black experiences.

“They’re really not aware of how painful it is to be Black in America. They just really don’t understand,” McGowen told ENS. “We call it ‘living in a bubble.’” The racial divide is particularly stark in Glynn County’s churches, which are mostly single-race congregations, she said.

The most recent equity dinner was held online Oct. 21. About 50 people logged into Zoom to discuss how race is represented in the media, sometimes perpetuating stereotypes, Purdy said. Purdy also has organized two Sacred Ground circles that start this month, one with members of his congregation and the other with clergy in his convocation of the Diocese of Georgia. Sacred Ground is The Episcopal Church’s 10-part, film-based discussion series that confronts the historical roots of systemic racism and examines how that history still shapes American institutions and social interactions today.

Such conversations are taking place in front of the backdrop of the Arbery case. When jury selection began on Oct. 18, Logue, the Georgia bishop, issued a call for prayers, “for Ahmaud Arbery’s family and prayers for the accused killers and their families,” he said in an online statement. “I ask you to join me in prayer as the case comes to trial, for wisdom for the judge and jury charged with the sacred task of weighing out earthly justice.”

Oct. 18 also was the first day that Glynn Clergy for Equity gathered at the courthouse, to pray and sing “Lift Every Voice,” a hymn also known as the Black national anthem. Since then, a rotating lineup of faith leaders has turned out daily to support Arbery’s family, to talk with demonstrators and to offer prayers for the community.

The clergy members come in pairs or in groups of three or four, Purdy said, usually in the mornings, when there is more activity outside. They set up a tent and wear their clergy collars or other vestments, depending on their faith traditions. They bring a message: “We are a community that seeks unity,” Purdy said, “even when the forces around us are trying to pull us apart.”

The news this week that only one Black juror was selected for the 12-person jury hasn’t helped tamp down tensions, Cope said. “Everybody’s going to probably be on edge,” he said, and that likely will continue until the verdict is handed down. Either way, some people will agree, and some will say the jury got it wrong, he said.

McGowen agreed. “Even after the trial, we’re still going to have to work together – Black, white, Hispanic – to bring a common unity.” She also prays for an end to violence against Black members of the community. “I’m a Black woman, and I have a 26-year-old grandson. And I remember when he lived here, he would run in his neighborhood.” She considers how easily her grandson could have met the same fate as Arbery.

“I want justice for Ahmaud, and I want justice for anyone who has gone before him,” she said. “And of course, this is going to happen in another community, so we need to be able to reach out to that community as well and offer our support.”