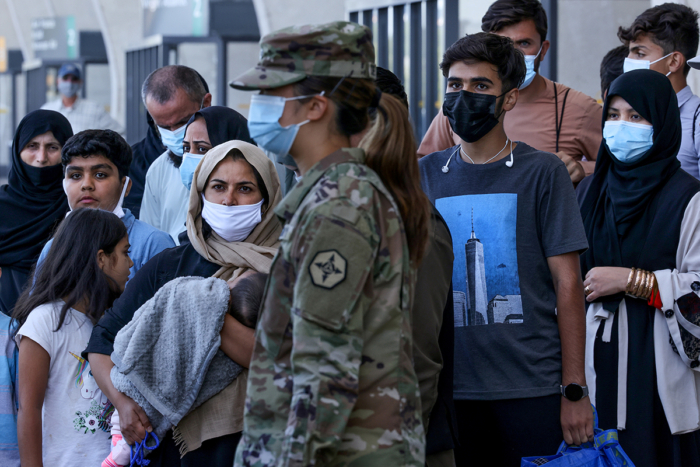 Afghan refugees wait to board buses that will take them to a processing center after arriving at Dulles International Airport in Virginia on Sept. 2. About 1,800 of the 50,000 Afghans allowed into the U.S. through a humanitarian parole program are headed for Oklahoma. Photo: Reuters

[Episcopal News Service] Volunteer teams of Oklahoma Episcopalians are providing a ministry of welcome at the airport in Oklahoma City to their newest neighbors. For their nightly appointments, they greet some of the 1,800 Afghans who are arriving to make new homes in the state after fleeing their home country when the Taliban took control there in August.

The ministry is simple but essential: The Episcopal volunteers help the newly arrived Afghans collect their luggage and then drive them to the hotels where they will stay until permanent housing is secured. From there, the Afghan evacuees will be assisted by case workers from the Oklahoma City branch of Catholic Charities.

“The Holy Spirit arrives in that moment,” Jennifer Hund told Episcopal News Service as she described the scenes at the airport and hotels. Hund is coordinating the Episcopal diocese’s team of volunteers, who began welcoming Afghan individuals and families about two weeks ago. They often arrive weary from travel but grateful for the show of hospitality from their new neighbors, she said. “I can see in the eyes of the folks that we’re assisting just the relief of being taken care of, being in a safe place.”

After the 20-year U.S. war in Afghanistan ended in August with the final withdrawal of American troops, about 50,000 Afghans were allowed into the U.S. under what is known as humanitarian parole. Some may be able to apply for special immigrant visas, while others will apply for asylum. All will need to find places to live. And as they settle in new communities like Oklahoma City, many will receive help from one of the nine agencies that are part of the federal refugee resettlement program, including Episcopal Migration Ministries, or EMM.

EMM has invited Episcopalians and their congregations and dioceses to support that work by making donations online to the Neighbors Welcome: Afghan Allies Fund and by volunteering in other ways, which they can do through an online form. As the Episcopal agency coordinates with its network of 11 affiliates around the country, Episcopalians in cities without an EMM affiliate still can lend a hand by connecting with one of the other resettlement agencies.

Catholic Charities is the agency leading those efforts in Oklahoma, in partnership with the local chapter of the Council on American-Islamic Relations. When the federal government announced how many Afghans would be moving to Oklahoma – more than in all but two other states, California and Texas – the Episcopal Diocese of Oklahoma reached out to Catholic Charities to offer assistance.

“Sometimes there are these opportunities for real Gospel ministry that show up at your doorstep,” Bishop Poulson Reed told ENS. The diocese learned that welcoming Afghans at the airport would help ease the burden on Catholic Charities case workers, who already were working long hours.

“We’ve pivoted to what we really see as a Gospel ministry of hospitality and welcome,” Reed said. “As we seek to follow Jesus and offer that hospitality, these are our neighbors who have arrived, and we’re called to help them and welcome them.”

The humanitarian parole program is separate from the refugee resettlement program that EMM, Catholic Charities and the other seven agencies facilitate on behalf of the State Department, though the agencies plan to provide services to these Afghans similar to the services they have provided since 1980 through the refugee resettlement program. Those services include English language and cultural orientation classes, employment services, school enrollment, and initial assistance with housing and transportation.

The Episcopal Church’s Office of Government Relations this week issued an action alert advocating additional congressional action to support the Afghan arrivals. The proposed Afghan Adjustment Act “would create a specific program allowing all Afghan arrivals to directly apply for a green card without needing to go through alternate channels such as the asylum system.”

In Oklahoma, about 1,000 Afghans are expected in Oklahoma City and 800 in Tulsa. The first of these families landed at Oklahoma City’s Will Rogers World Airport in late September, and more are arriving in the city every day, usually in the evenings. The teams of Episcopal volunteers started by training with Catholic Charities case workers and shadowing them at the airport, and eventually, the volunteers will take full responsibility for welcoming the arriving Afghans.

The diocese’s goal is to recruit and train enough volunteers to fill about six teams, each with six to eight members, that will be on call to go to the airport, as needed, to welcome arriving Afghans. About 20 volunteers attended an orientation Nov. 9 at St. Paul’s Episcopal Cathedral in Oklahoma City.

The Very Rev. Katie Churchwell, dean of the cathedral, is among the volunteers who have participated so far. She told ENS that the Afghans’ flights usually start landing after 5 p.m. and sometimes arrive as late as midnight. “It all changes day by day,” she said. Sometimes the volunteers have a sole individual to welcome, while other flights arrive with a dozen or more Afghans. The volunteers have practiced greeting the new arrivals with the traditional Arabic phrase “salaam alaikum,” or “peace be to you.”

Some members of the welcoming team escort these new neighbors to the baggage claim area, while other volunteers wait in their own vehicles or in larger vehicles provided by Catholic Charities to take them to nearby hotels. If no one in the arriving group speaks English, the Episcopal volunteers can call an interpreter to assist in translating Dari or Pashto.

“It’s been really touching and moving,” Churchwell said, “not just in the work that we get to do, but as you learn about and know about the circumstances that people are coming from and really get to see what it’s like being in their shoes, you’re really able to see the trauma that people have experienced and continue to experience in being displaced.” Many of the people were allowed to come to the U.S. because they fear persecution in Afghanistan for their work in support of the U.S. government.

Diocesan leaders said they are open to offering other forms of support as needed, but for now, their work will focus on providing an initial warm welcome to the Afghans, who are expected to continue arriving through early next year. “The response has been amazing, of people who want to be engaged in this work,” Churchwell said.