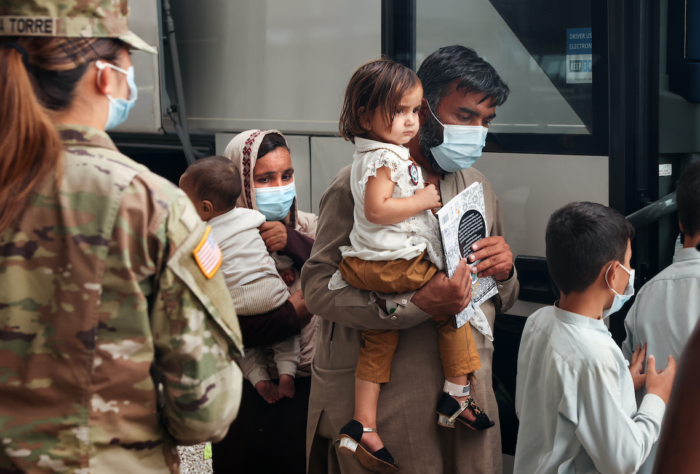 Afghans on Aug. 31 board a bus to be taken to a processing center after arriving at Dulles International Airport in Dulles, Virginia. Photo: Reuters

[Episcopal News Service] The Episcopal Church has launched a fundraising campaign to support Episcopal Migration Ministries as it and other refugee resettlement agencies prepare to welcome and assist thousands of Afghans who fled their home country after the Taliban took control this month.

Episcopal Migration Ministries, or EMM, set an initial goal of raising $4 million, based on its estimate of the amount of money its affiliates will need to provide housing, clothing, legal assistance and other support to newly arrived Afghans for up to six months. Donations can be made online to the Neighbors Welcome: Afghan Allies Fund.

“The needs are great and will require our communities and congregations to come together to contribute financially, offer housing, volunteer and pray,” Presiding Bishop Michael Curry said Aug. 31 in a video message in which he backed such efforts. “You can also stay involved in the work of advocacy in ensuring that the government of the United States honors its commitments to our Afghan allies.”

The Episcopal Church is one of 88 faith organizations that signed an Aug. 30 letter to President Joe Biden asking him to commit the U.S. to welcoming and protecting “Afghans in need of refuge.” The church’s Washington-based Office of Government Relations has encouraged Episcopalians to press lawmakers to make it easier for Afghans to resettle in the U.S.

EMM also is inviting dioceses, congregations and individual Episcopalians to provide various nonmonetary support for the Afghan families, including volunteering and becoming community sponsors. A top priority is identifying temporary places for those Afghans to live, such as vacant church rectories and diocesan camps and conference centers. Individuals interested in offering housing or volunteering can complete EMM’s online form.

“The ministry of offering welcome to those fleeing violence is nothing less than God’s work — one that calls us to walk the way of love as Jesus of Nazareth taught us, through compassion, through practical care, showing to our newest neighbors that we are neighbors,” Curry said.

Afghanistan’s government fell to the Taliban on Aug. 15, expediting the U.S.’s end to its 20-year war in the country. The U.S. military completed its withdrawal on Aug. 30 after spending the past two weeks securing the airport in the capital, Kabul, to ensure Americans and fleeing Afghans had access to flights out of the country.

About 50,000 Afghans are being allowed into the U.S. under what is known as a humanitarian parole program, this one created as the crisis escalated in Afghanistan with the fall of the government.

The humanitarian parole program is separate from the refugee resettlement program that EMM and eight other agencies facilitate on behalf of the State Department, though the agencies plan to provide services to these Afghans similar to the services they have provided since 1980 through the refugee resettlement program. Those services include English language and cultural orientation classes, employment services, school enrollment, and initial assistance with housing and transportation.

EMM and the other resettlement agencies already have helped resettle some Afghans through the government’s special immigrant visa program, which is open to people who fear persecution for their work in support of the U.S. government.

The parole program is intended to accommodate others arriving amid the recent crisis in Afghanistan who do not yet have legal residency status. Once in the U.S., some may be able to apply for special immigrant visas, while others will apply for asylum, said Allison Duvall, EMM’s senior manager for church relations and engagement.

The Afghans will receive just enough financial support from the federal government to begin their lives in this country, Duvall told Episcopal News Service. Until they qualify for special immigrant visas or asylum, they will not be eligible for government benefits or the kind of longer-term financial support that is available to families who are part of the refugee resettlement program, Duvall said.

Short time frames pose another challenge. Refugee resettlement agencies typically have weeks and months, if not years, to prepare for the families they are welcoming, Duvall said. With the Afghans, some may arrive with less than a day’s notice, providing little time to arrange for housing. This has added to the urgency of EMM’s efforts as it works with its affiliates.

“Everyone’s saying that we’ve never seen anything like this before,” Duvall said.

Interfaith Ministries for Greater Houston, an EMM affiliate in the Diocese of Texas, has received 50 Afghans in the past month, an unprecedented number, according to Ali Al Sudani, the agency’s chief programs officer. Those individuals arrived with special immigrant visas. More are expected soon through the parole program.

“These are individuals who supported us [in Afghanistan], and now it’s our role to support them,” Al Sudani told ENS.

Al Sudani, who came to the U.S. as an Iraqi refugee in 2009, said Interfaith Ministries is working with its faith-based partners, including Episcopal congregations, to marshal resources to provide a warm welcome to the Afghans. In just one day, supporters responded to an online wish list by sending nearly 200 packages with household items, he said, from towels and pillows to TVs and microwaves.

The organization also has launched a public awareness campaign – partly to generate material support but also to educate the community about who these new neighbors are and why they are here. The community’s response so far has been overwhelmingly positive, he said.

“In my work here with Interfaith Ministries, I’ve never seen such a response of support to any refugee groups before,” he said.