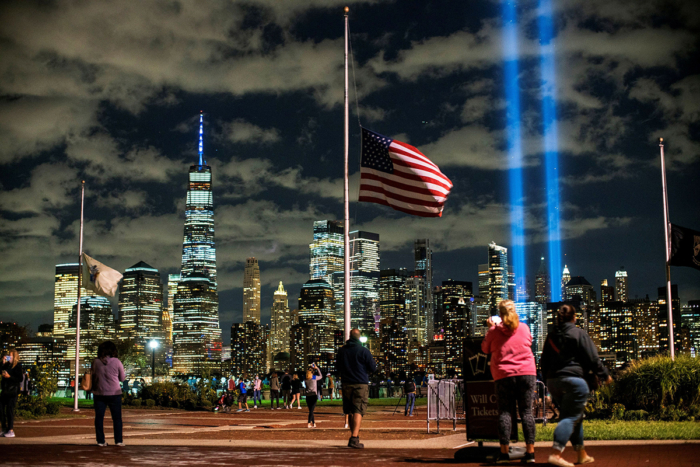 From Liberty State Park in Jersey City, New Jersey, people look at the Tribute in Light installation marking the 19th anniversary of the 9/11 attacks in New York City on Sept. 11, 2020. Photo: Reuters

[Episcopal News Service] Episcopalians were among the large crowd of people who turned out Sept. 9 for an interfaith peace walk in New York’s Midtown Manhattan to commemorate 20 years since the 9/11 terrorist attacks, as dioceses and congregations across The Episcopal Church prepare for local events this weekend marking the anniversary.

The evening peace walk featured stops at Christian, Jewish, Muslim and Sikh places of worship, a show of interfaith solidarity in the fight against ethnic and religious prejudice related to the attacks on Sept. 11, 2001. The 19 attackers, affiliated with the terrorist group Al Qaeda, hijacked four airplanes and crashed them into the World Trade Center in New York, the Pentagon in suburban Virginia, and a field in Somerset County, Pennsylvania, killing 2,977 people and injuring thousands more.

“As followers of Jesus, and with our siblings in other faith traditions, we place great value on the act of remembrance,” Presiding Bishop Michael Curry said in a pastoral message released earlier this week. “As we reflect on the solemn anniversary of Sept. 11, 2001, we remember many loved ones lost and first responders who put their lives at risk, modeling the sacrificial love of Jesus, who said: ‘No one has greater love than this, to lay down one’s life for one’s friends.’”

The National September 11 Memorial & Museum in New York will hold its annual ceremony to read the names of the victims, starting at 8:30 a.m. It is expected to finish at 1 p.m., and the “Tribute in Light” will begin at sundown.

Curry is scheduled to preach at the 11:15 a.m. service Sept. 12 at Trinity Church Wall Street in Lower Manhattan, near the World Trade Center site. The church’s St. Paul’s Chapel became a focal point for pastoral outreach to Ground Zero after the attacks, with hundreds of volunteers ministering to first responders and workers who were tasked with sifting through the ruins of the towers.

For the 20-year commemorations, Trinity Church is inviting the public to “A Time and Space for Remembrance and Healing,” which will span the weekend, starting with a service at 8 p.m. Sept. 10. After the service, St. Paul’s Chapel will remain open to all who “are seeking a place to pray, reflect, mourn, or simply sit with their memories,” according to the church.

Our parishioners share their memories of #September11 & remember the volunteer experience at St. Paul's Chapel in the weeks following.

All are invited to visit the chapel and attend special memorial services over the weekend.

At St. Paul’s, clergy from the Diocese of New York will be present to offer prayers, and from 7 a.m. to 7 p.m. Sept. 11, brief musical interludes and readings will be offered each hour on the hour. The chapel also will host an exhibit of 9/11 artifacts and other displays.

The diocese also developed liturgical propers that congregations can follow on Sept. 11, along with other resources available online.

In the nation’s capital, Washington National Cathedral offered a Morning Prayer service on Sept. 10 from its War Memorial Chapel, led by the Rt. Rev. Carl Wright, bishop for the Armed Forces and Federal Ministries. The cathedral will hold a memorial service at 11 a.m. Sept. 12, including the tolling of the cathedral’s funeral bell. The images of the 343 New York firefighters who died in the attacks will be displayed on the cathedral’s West Lawn.

“In the two decades since, we’ve learned many lessons — about hope, perseverance, healing and loss — but none so profound and searing as the courage and heroism of those first responders who rushed to aid in the aftermath of the attacks,” said the Very Rev. Randy Hollerith, dean of the cathedral. “Today, we mourn them, grieve their loss, and reflect on their sacrifice, even as we give thanks for the countless lives they saved.”

In addition to being open to the public, the service will be livestreamed on the cathedral’s YouTube channel.

Join us in-person or online this Sunday as Washington National Cathedral hosts a special Holy Eucharist in remembrance of the 20th anniversary of the attacks on September 11, 2001. We'll remember the lives lost and look towards a future with peace.https://t.co/ILBFASWyUf pic.twitter.com/xtRZE26QqM

The 2001 terrorist attack remains the deadliest in history, and the catastrophe has had an indelible influence on two decades of American foreign policy and domestic politics. The United States and a coalition of allies responded a month after the attack by invading Afghanistan, where Al Qaeda was based, and toppling the ruling Taliban. That 20-year war ended just last month with the Taliban returning to power as the U.S. military expedited its withdrawal from the country.

The following are some of the other 9/11 commemorations scheduled for this weekend involving Episcopal dioceses and congregations.