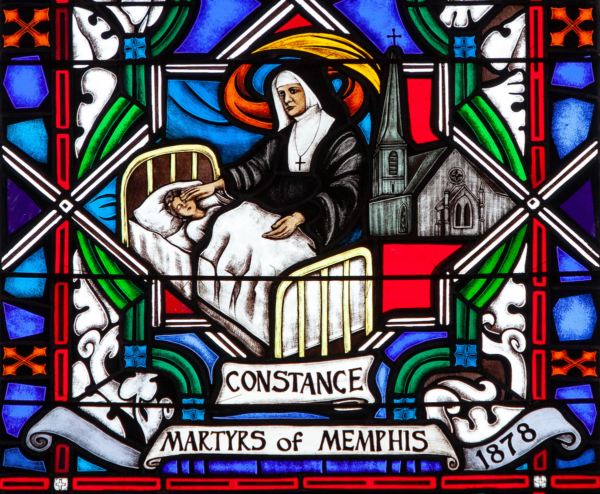 Constance and the other martyrs of Memphis are remembered as part of a larger window in All Saints’ Chapel at the University of the South in Sewanee, Tennessee. Sister Hughetta, the only nun to survive the yellow fever epidemic, moved to Sewanee, and in 1888, she and other sisters started what is now the Southern Province of the Sisters of St. Mary. Photo: University of the South

Editor’s note: A previous version of this story included a photo that incorrectly identified the woman shown as Constance. The woman was Mother Harriet Stone Cannon who founded the order in 1865.

[Episcopal News Service] The martyrdom of Constance and her five companions, who died within a month of each other while ministering to residents of Memphis, Tennessee, amid the 1878 yellow fever epidemic, has always inspired the ministry of St. Mary’s Episcopal Cathedral.

The Rev. Laura Gettys, the Memphis cathedral’s interim dean, told Episcopal News Service that the question is how to continue to live out the story and not leave it on the shelf as a legend from the past. She said that is especially true now as the COVID-19 pandemic inspires members of the cathedral but restrictions on movement challenge their ministries.

“On the days when I particularly feel overwhelmed, I’m mindful of what they did. They showed up and were faithful and were present to those who needed them the most. They were there for prayer, for love, for compassion, and many times for medical care,” Gettys said.

The legacy of the “Martyrs of Memphis,” as they are known, “is both gift and challenge,” she said. “It is in every fiber of who we are and what we are about.” Episcopalians at the cathedral have followed the martyrs’ example by growing into a hub of worship and services for the community, Gettys said, concentrating on companionship and inequities in housing and medical care.

The yellow fever epidemic of 1878 began in New Orleans, spread up the Mississippi River and moved inland. An estimated 120,000 people contracted the hemorrhagic fever, and 13,000 to 20,000 died.

The martyrs’ story is a harrowing one of people dying in streets and parks, as others were found “insensible without attendants,” according to a historical account compiled the following year.

It begins in 1873 when Episcopal nuns from the Community of St. Mary in New York, including eventual martyrs Constance and Thelca, came to Memphis after Tennessee Bishop Charles T. Quintard asked New York Bishop Horatio Potter to send some sisters to found a school in Memphis. They soon encountered a yellow fever epidemic, and the teachers began nursing sick Memphians. It was the first of three yellow fever outbreaks in the city over 10 years.

Five years later, after the end of the school year, Constance and Thelca were resting at the order’s mother house in Peekskill, New York, when they received news on Aug. 5 that the fever had struck Memphis a second time. While residents with means, about 30,000, were fleeing the city, the sisters prepared to return. They arranged for money and supplies to be sent ahead to Memphis. When they arrived on Aug. 20, they found the cathedral neighborhood to be the city’s most infected area. Plans had been made for the nuns to attend to the city’s sick during the day and to sleep in the country every night for safety.

“We cannot listen to such a plan; it would never do; we are going to nurse day and night; we must be at our post,” one wrote.

The nuns and priests moved among the estimated 20,000 Memphians who remained in the city. They comforted the dying, tried to help the sick and took in many orphans. The Rev. Charles Carroll Parsons, the rector of Grace Episcopal Church in Memphis, who wrote to Quintard five days before dying, called the sisters the “brave, unshrinking daughters of a Divine Love.”

In September and early October of 1878, yellow fever decimated the city and the group working out of the cathedral. Parsons, a former U.S. Army artillery commander who defended Lt. Col. George Armstrong Custer at his 1867 court-martial, died on Sept. 6. Three days later Constance, superior of the work at Memphis and headmistress of the school, died. She was 33. Thecla, cathedral and school chapel sacristan who also taught music and English and Latin grammar, died Sept. 12. Sister Ruth, a nurse from Trinity Infirmary in New York who came to help, and the Rev. Louis S. Schuyler, newly ordained assistant rector at Parsons’ prior parish, Church of the Holy Innocents, Hoboken, New Jersey, both died Sept. 17. Sister Frances, a newly professed nun given charge of the order’s Church Home orphanage, died Oct. 4.

All six are buried near each other in the city’s historic Elmwood Cemetery, one of the South’s first rural cemeteries. The high altar at St. Mary’s, consecrated on Pentecost 1879, memorializes the sisters. The steps are inscribed with “Alleluia Osanna,” Constance’s last words.

These days, Gettys said, she is “thinking about our call, not to martyrdom but to be present to one another and to the community and to the Way of Love, and that is exactly what the sisters were doing.”

“It did end, for many, in martyrdom, but their call was not to that. It was to one another and to the neighborhood and those particularly who did not have the privilege and means to leave the city.”

Today, Episcopalians at the cathedral remain in the city, but a shelter-in-place order has changed their ministries. The most prominent example is the Wednesday morning Eucharist in Sisters’ Chapel and breakfast, supplemented by music and access to social services, for 150 to 175 community members in Martyrs Hall. The ministry is open to all but is focused on poor people, many of whom are homeless.

With none of the regular volunteers available, Gettys and the Rev. Patrick Williams, the cathedral’s canon pastor, have turned the morning into an “abbreviated and less-crowded” gathering that includes a prayer, a to-go sack meal and information about the few resources and agencies that are still available.

One of those agencies, and a long-time partner with the cathedral, is the nearby Constance Abbey, an intentional community of Episcopalians that serves the vulnerable in the Memphis Medical District neighborhood surrounding the cathedral. Because the cathedral is surrounded by a number of hospitals, health care workers and medical students often come to the church to pray, and the cathedral often stages health fairs in a nearby park. 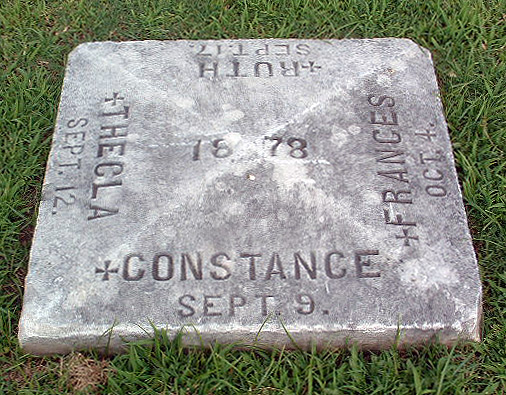 The four sisters of the Community of St. Mary who died within days of each other while nursing other Memphians in the 1878 yellow fever epidemic are buried in the city’s Elmwood Cemetery. Photo: Historic-Memphis.com

The Episcopal Church will commemorate Constance and her companions on Sept. 9, as it has since 1985 when the General Convention added the martyrs to its calendar of commemorations. Depending on the status of COVID-19, St. Mary’s will have some version of its annual “Martyrs Weekend” celebration, Gettys said. Normally, there is a Lessons and Carols-type service featuring readings from the martyrs’ letters and diaries with music. There is also a service at Elmwood Cemetery followed by a picnic. A member of the Community of St. Mary in Sewanee, Tennessee, often comes for the celebration, bringing with her the chalice that was used at Eucharist during the epidemic.

Others across the church have been considering the resonance of the martyrs’ story in these days of COVID-19. The Rev. Julia M. Gatta, the Bishop Frank A. Juhan professor of pastoral theology at the School of Theology in Sewanee, told ENS she sees parallels between the heroism of Constance and her companions and today’s essential workers. Those workers, in hospitals or grocery stores, are trying to help their communities survive. She especially pointed to retired health care workers who have come out of retirement to volunteer despite their age and increased vulnerability.

There are differences, too. While the priests in Memphis felt obligated to bring the Last Rites to people during the yellow fever epidemic, Gatta said clergy today are discouraged from doing so in person, so as not to become an unwitting coronavirus carrier. “It makes it painful for clergy to not be able to minister to their own people who are dying, who are sick,” she said.

Gatta teaches pastoral theology, including ministry to the sick and dying, and tells her students they must “act responsibly.” They must obey medical protocols, even if those measures seem to create a degree of separation from their congregants. However, she also speaks about Constance and her companions, telling future priests that sometimes they will have to take risks in order to minister to the sick. Those risks, however, must not be “crazy risks, ones that can have risks beyond ourselves but to other people as well.”

There is another kind of risk these days, Gatta said. “Besides the grace of heroism, people need to be aware of the peculiar temptations right now, especially around desolation, to become closed in on themselves, to become embittered, to become despairing,” she said. “There are particular temptations that go with this moment as well, and they require vigilance.”

Meanwhile, Anna Fitch Courie, who championed Constance and her companions in the 2016 edition of Lent Madness has been thinking about the different ways people are called.

“We all have very different, profound callings in our lives that don’t necessarily mean you have to be on the front lines putting cool cloths on those with COVID-19,” she said. “But you are called, and you are called to listen to where God is sending you messages and whispering to you in your life.”

Some people are on the front lines, and some are called to pray for them. Some can sew masks, and some can buy the material for those masks, she said. Fitch Courie, who is a nurse but whose own health puts her in the high-risk category, told ENS that she knows that an ICU is not where she is called to be right now, even though that is where she used to nurse.

“You have to come to this point in your spiritual life where you are very comfortable and secure that you are doing what you are called to do at that time,” she said.

Constance trusted God’s call, Fitch Courie said, and was true to her name, which means constant presence, dependable, faithful. She shows what it looks like to live a life based on consistently praying and listening for and responding to God’s call.