[Episcopal News Service] Episcopalians and church leaders in the Diocese of Louisiana are bracing for extended power outages while assisting with emergency housing needs and widespread cleanup efforts as officials assess the damage from Hurricane Ida.

Ida made landfall Aug. 29 near Port Fourchon as a Category 4 hurricane, with winds reaching 150 mph and a coastal storm surge of up to 16 feet. In New Orleans, the levees held up, averting a disaster on the scale of Hurricane Katrina, which made landfall exactly 16 years earlier. The diocese reported minimal flooding damage at its churches, but Ida’s heavy wind and rain still packed a punch. 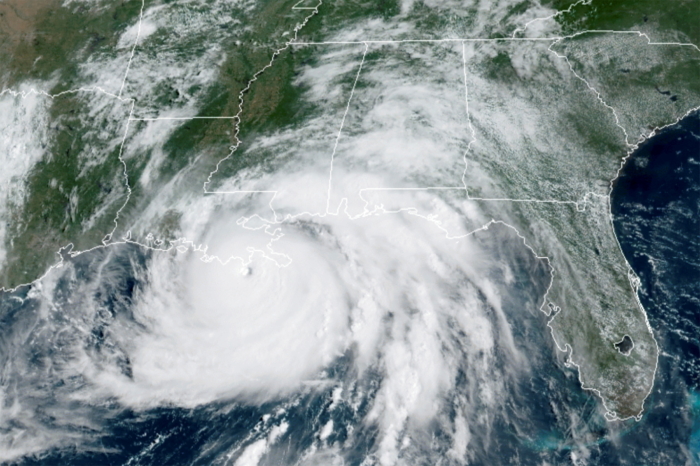 A satellite image shows Hurricane Ida in the Gulf of Mexico and approaching the coast of Louisiana on Aug. 29. Photo: NOAA via Reuters

Some of the worst church damage was found at St. Andrew’s Episcopal Church in Bayou Dularge, south of Houma. The storm ripped off large sections of the roof, and most of the church’s ceiling fell in, according to the Rev. Robert Beazley, the diocese’s disaster preparedness and response coordinator. At least eight other churches in the diocese sustained minor roof, window and water damage. Many churches were still without power on Sept. 1, along with hundreds of thousands of residential customers, though the utility Entergy announced it had restored power for some New Orleans customers.

“A lot of the electrical infrastructure is down for anywhere from a week to six weeks in [some] areas, so the lasting crisis of this hurricane is going to be helping evacuees,” Beazley told Episcopal News Service by phone from Tallahassee, Florida, where he is staying with relatives. “It’s one thing to be in a hotel for three days. It’s another thing to be there three weeks.”

After making landfall, Hurricane Ida weakened as it moved north. It was downgraded to a tropical storm by the time it reached southwest Mississippi early Aug. 30 and then began making a gradual northeast turn. Entergy reported about 830,000 power outages in Louisiana and 12,000 in Mississippi as of late Aug. 31.

The Diocese of Louisiana includes New Orleans, Baton Rouge and other communities in the southeast section of the state – the toes of the Louisiana boot. The Diocese of Western Louisiana, which includes the northern part of the state and southern communities as far east as Lafayette, was hit hard a year ago by Hurricane Laura. It dodged a direct hit from Ida, though the storm forced churches to cancel Sunday services as residents in some parts of the diocese were among those facing mandatory or voluntary evacuation orders.

Ida’s inland path cut through the middle of the Diocese of Mississippi, dumping as much as a foot of rain on some southern and coastal communities. Even so, that region fared better than expected, and churches there sustained no more than minor damage, according to the Rev. Scott Lenoir, the diocese’s disaster preparedness and response team coordinator.

The dioceses in the region are working with Episcopal Relief & Development to assess the needs of residents, especially evacuees, and provide financial relief as requested. The agency said in a news release that it has scheduled daily calls with local Episcopal leaders since last weekend. Episcopalians interested in helping are encouraged to contribute to the agency’s Hurricane Relief Fund.

“The anniversary of Hurricane Katrina, on top of COVID-19 and previous storms, contributed to the successive trauma felt by many in the South as Hurricane Ida made landfall,” said Katie Mears, senior director of Episcopal Relief & Development’s U.S. Disaster Program. “At this time, safety is a primary concern. We stand ready to help our partners as soon as it is safe to do so.”

Episcopal Relief & Development is supporting @edolaorg and other regional partners in the path of Hurricane Ida. Learn more at https://t.co/Z3s2noxEjh pic.twitter.com/exGlPx2YmI

The Rev. Shannon Duckworth, canon to the ordinary in the Diocese of Louisiana, checked in with about 50 clergy members via a Zoom meeting on Aug. 30, and she had another meeting scheduled for Sept. 1. The goal, Duckworth told ENS, was both to collect information on conditions at the diocese’s congregations and to provide pastoral support to local leaders. She also keeps in contact with those leaders by phone and text.

Most of those clergy members were subject to evacuation orders, she said, though they have worked to maintain contact with parishioners and determine how the churches can best help their members and local communities.

A deacon based in New Orleans is working to provide food and water for homeless individuals in the city, she said. The diocese’s Solomon Episcopal Conference Center in Loranger, north of New Orleans, opened its doors to evacuees and electrical crew members in need of temporary shelter. The Diocese of Western Louisiana and other neighboring dioceses have offered support and relief for the evacuees in their midst, Duckworth said.

Given the power outages’ uncertain duration in southeastern Louisiana, “short-term housing or just staying at home is not going to be feasible,” she said.

The diocese also has begun working with local church leaders to prepare insurance claims for damage to church buildings, Beazley said. In addition to the substantial damage to St. Andrew’s, water damage, mostly due to rain through broken windows and leaks in windows and roofs, was reported at several churches: St. John’s in Thibodaux, St. Mark’s in Harvey, Christ Episcopal Church in Slidell and three New Orleans churches: St. George’s, St. Paul’s and Trinity Episcopal Church. St. Augustine’s in Metairie sustained minor roof damage. The storm smashed the front glass doors at the Chapel of the Holy Spirit in New Orleans, causing some water damage.

“Know that each of you are in my prayers,” Louisiana Bishop Morris Thompson said in an Aug. 31 pastoral message to the diocese. “The road of recovery will be long, but I am certain of our strength and resiliency.”

In addition to his diocesan work, Beazley serves as rector at St. Michael’s Episcopal Church in Mandeville, on the north shore of Lake Pontchartrain. Hurricane Ida knocked down some trees on the church property, but they fell away from the buildings and caused no other damage.

The diocese is accepting donations to its hurricane relief fund, in addition to relying on the assistance that Episcopal Relief & Development is providing for evacuees.