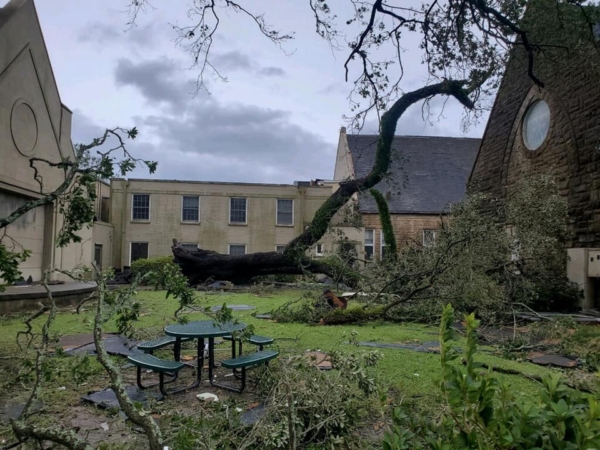 [Episcopal News Service] Several Episcopal properties in the Diocese of Western Louisiana sustained heavy damage on Aug. 27 as Hurricane Laura left a narrow but brutal trail of destruction through the state.

“I think that most people here just did not anticipate this level of destruction,” said Bishop Jacob Owensby, who spoke to Episcopal News Service from his car after driving around in search of a cell signal. “This will define ministry in this diocese for years.”

Laura came ashore near the border of Texas and Louisiana as a Category 4 hurricane with winds up to 150 mph, one of the most powerful storms to hit the Gulf Coast in decades. The storm left at least six people dead and caused major property damage, mostly in and around Lake Charles, Louisiana, a small city along the inland waterways between Houston and New Orleans.

Parts of the roof at St. Michael & All Angels Episcopal Church were ripped off, causing water damage inside the church and rectory. On Facebook, church leaders expressed thanks for the safety of their parishioners and launched a fundraiser for recovery efforts.

On the other side of town, at the Episcopal Church of the Good Shepherd, a large oak tree fell toward the church but did not appear to cause major damage. As the storm was ravaging Lake Charles, the Rev. Frances “Boo” Kay, assisting priest at Good Shepherd, led Compline on Facebook Live from Baton Rouge, where she had evacuated.

“I may be a little tearful because I think I’m going to lose my house,” Kay warned as she started the service, “but … I’ve done it once. I can definitely do it again.”

The next day, Kay shared updates about the church and the adjoining Bishop Noland Episcopal Day School. The school suffered damage to its gymnasium roof and some windows, and a storage shed was destroyed.

“We have so many people that are without homes and so much destruction, but we have so much to be thankful for,” she said. “I think that everyone is thankful, if you evacuated, that you got out with your lives and we’re so grateful that all of our families who evacuated are safe. That’s the main thing.”

On the afternoon of the 28th, Owensby was still trying to assess the damage around the diocese from his home in Alexandria, in the center of the state. Lake Charles appeared to be the hardest hit; his son’s workplace there was “flattened,” he said. But he also said he was deeply concerned about residents of the many small rural communities, already struggling to make ends meet, who could face devastating storm damage. He still had not been able to get any information about two parishes in areas that were hit hard by the storm.

“These are people who are barely making it,” he said. “You take away their housing or you crush one of their cars – the impact on those people is life-threatening. And so you stretch that across western Louisiana, and you’ve really got a social justice and works-of-mercy challenge.”

Owensby said the diocese has been working with Episcopal Relief & Development – which is collecting donations for its Hurricane Relief Fund – before and after the storm to identify the most urgent needs.