[Episcopal News Service] Episcopal and Anglican leaders are inviting church members worldwide to a webinar series for Advent that will highlight the disproportionate effects of environmental disasters and climate change on Indigenous communities.

“Prophetic Indigenous Voices on the Planetary Crisis” is a four-part series on Zoom. As its name suggests, its goal is to lift up the voices of Indigenous people, who will be featured in 45-minute videos sharing their experiences with environmental racism in four regions: the South Pacific, Africa, the Amazon and the Arctic.

Participants will spend the remaining 45 minutes of each webinar in small group discussions about the issues identified in the videos. The webinars are scheduled for each Monday in Advent, starting Nov. 30. Also, each installment in the series will be broken into four parallel sessions held at different times in the day, to accommodate participants in time zones around the world.

The series invokes the themes of Advent, a time of watchfulness as Christians await the birth of Jesus on Christmas, Andrus told Episcopal News Service. “The idea of watchfulness and attentiveness to the truth and reality is underlying these webinars,” he said.

These sessions are open to anyone interested in learning more about The Episcopal Church’s and Anglican Communion’s engagement on environmental issues, Andrus said, as well as Episcopalians looking for ways to take up the church’s call to racial reconciliation and healing.

The church’s General Convention has voiced its opposition to environmental racism several times, in 2000, 2015 and 2018.

The resolution passed by the 79th General Convention in 2018 called on governments and industries to “protect the health of all persons from unsafe and unhealthy exposures to air and water pollution, toxic substances, or radiation in their food, water supply, living quarters, and work places.” 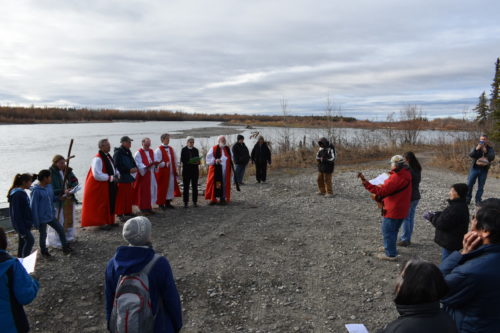 Episcopal bishops and residents of Venetie, Alaska, gather Sept. 23, 2017, at the bank of the Chandalar River to bless the water, land and people. It was one of eight villages in the Alaska Interior visited by different groups of bishops attending the fall House of Bishops meeting in Fairbanks. Photo: David Paulsen/Episcopal News Service

It also acknowledged the “disproportionate risk of environmental pollution or degradation” faced by “poor communities, those who live closest to the land in subsistence cultures, and members of marginalized ethnic groups.” The church formed the Task Force on Care of Creation and Environmental Racism to help lead the church’s response to those threats.

Andrus underscored that the “Indigenous Voices” of the series’ title won’t be sharing their stories as church outsiders – they are the church. Many Indigenous people have long followed the Anglican tradition, and those featured in the webinars’ videos are Anglicans and Episcopalians whose spiritual beliefs intersect with their Indigenous cultures.

In Alaska, for example, the Gwich’in are mostly Episcopalians because of the church’s early missionary work in the region. Many Gwich’in live in the small villages of the Alaskan Interior and still follow the traditional subsistence ways of life that their families have for thousands of years.

That lifestyle, however, now faces environmental, cultural and economic threats, including from the push to open part of the Arctic National Wildlife Refuge to oil drilling. The refuge is a major caribou birthing ground and considered sacred by the Alaska natives who hunt the caribou when the herds migrate south.

Such threats will be among those featured in the fourth webinar, on the Arctic, to be held on Dec. 21. The video will include Indigenous voices from Alaska, Canada and Norway. Climate change is an overarching threat for these and other Indigenous people in the webinar series, especially in island communities and coastal regions devastated by rising sea levels.

By coordinating the webinars across multiple Anglican networks, Andrus said the series builds on a joint statement released by Anglican and Episcopal bishops earlier this year, timed for Juneteenth in the United States, that called attention to environmental racism worldwide. The upcoming webinar series takes that call a step further by identifying the specific challenges facing Indigenous people around the Anglican Communion, Andrus said.

There is still time to register for the initial webinar on Nov. 30. The session timed for North American participants is set for 4 p.m. EST.