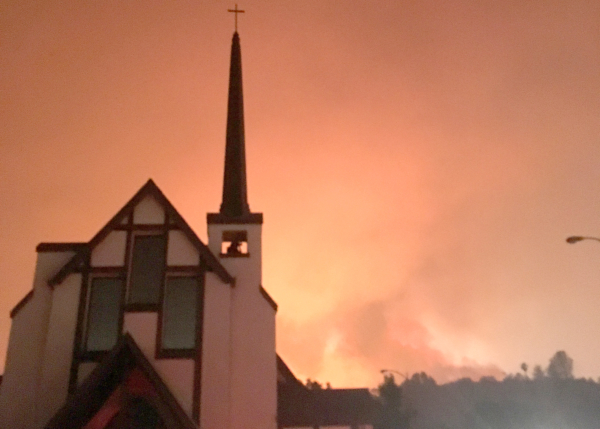 The Rev. Carren Sheldon took this photo July 26 of All Saints’ Episcopal Church in Redding, California, just before she closed the church amid an evacuation of the neighborhood to escape the Carr Fire. Sheldon took 125 years’ worth of church records with her and brought them to diocesan offices in Sacramento to protect them from the fire.

[Episcopal News Service] The Rev. Carren Sheldon’s evening on July 26 was supposed to go something like this: Evening Prayer, dinner, compline, sleep. But after dinner, she returned to All Saints’ Episcopal Church in Redding, California, to find the neighborhood on the brink of disaster. Heat, wind and “bizarre weather patterns” fueled the sudden advance of a growing wildfire.

“The sky was orange, and the wind was blowing cinders and ash,” Sheldon told Episcopal News Service by phone. “The power was out, and the traffic was gridlocked. It was apparent that it was time to gather the irreplaceable records of the church and flee.”

The church was evacuated along with most of that section of Redding, a town of about 92,000 people in Northern California. The blaze, known as the Carr Fire, has consumed more than 100,000 acres, destroyed more than 1,000 homes and killed at least six people as of Aug. 1. And this fire is just one of more than a dozen major wildfires that California authorities are working to contain and extinguish, from the Oregon state line to San Diego County.

The Carr Fire still is considered only 30 percent contained, but it no longer is threatening the neighborhood around All Saints’, enabling Sheldon to return and reopen the church Aug. 1. As interim rector, she has spent the past week checking on parishioners’ safety and providing pastoral care to church members and neighbors, several of whom have lost their homes or are just beginning to assess the damage.

#CarrFire [update] A live evacuation and repopulation map has been developed for residents in the communities affected by evacuation orders. Visit: https://t.co/fJ9NO3Uv9j pic.twitter.com/jo3RW5ivTO

Sheldon also has been in regular contact with the Diocese of Northern California’s Disaster Response Team, which is supporting All Saints’ and the smaller congregations south of Redding that are affected by two large fires near the Mendocino National Forest. Members of those congregations, too, have been displaced or are helping with the emergency response.

As California’s annual wildfire season expands outside of its normal months and the fires grow hotter and larger, the diocese’s Disaster Response Team has had the unwanted but valuable experience of responding to several large fires in recent years. The team’s priority in each case is to reach out to Episcopalians affected by the fires while also establishing local churches as resources for communities dealing with heartbreaking devastation.

“For us it’s, how do we help [the churches] to be a community center for so many people who are displaced and traumatized?” said Kati Braak, director of operations, who helps coordinate the Disaster Response Team. “That cup of coffee, the WiFi, a prayer – those things go a long way in helping the surrounding communities find some stability. … These don’t have to be big things.”

The Carr Fire came within three or four blocks of All Saints’ but caused no damage to the church other than dropping a layer of ash on the ground that had to be cleaned up before the building could reopen. The typical Sunday attendance at All Saints’ tops 100, but on July 29, parishioners had to find other options for worship. Some joined St. James Lutheran Church in Redding, and others traveled to St. Michael’s Episcopal Church in Anderson, California.

Northern California Bishop Barry Beisner, in a video message to All Saints’ on July 28, said he and Episcopalians churchwide are “mindful of the great challenges that you face, the great struggle that you face.”

“We will be praying for you,” Beisner said. “We watch, wait and pray together, and we’re prepared, once the time for watching and waiting is done … we will support you and help you and work together with you for as long as needed. We are with you. Christ is with you. We are one in him.”

Even before last week’s evacuation, the church was serving as a gathering place for Redding residents threatened by the fire. Now that the church has reopened, Sheldon is offering the church, the largest community facility in that part of Redding, as a resource for organizations that need a place to stage relief efforts.

Some of support provided by the diocese has taken the form of money raised through its standing Disaster Relief Fund. A diocesan newsletter reported July 28 that the fund paid for $1,500 worth of Target and Safeway gift cards that Sheldon is distributing to those in need. An additional $5,000 will cover other fire-related needs.

Braak said much of the support the diocese provides is guidance on how congregations can partner with other local organizations in matching resources to the needs in the community. The diocese receives similar support from Episcopal Relief & Development, which also distributes financial assistance through emergency grants that the diocese is requesting.

“We’re called by God to care for the whole community,” Braak said. 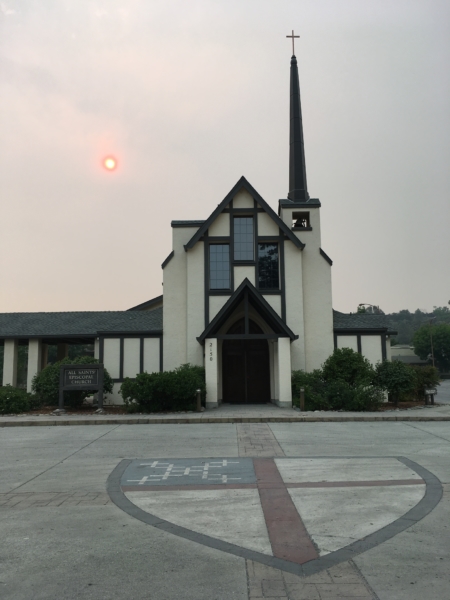 All Saints’ Episcopal Church in Redding, California, is seen July 30 after the threat of fire had subsided but before the ash had been cleared from in front of the church. Photo: Carren Sheldon

Sheldon feels that calling too. A natural disaster of this scale makes clear that a church is a community, not just a building.

“We are in the very early stages of this,” Sheldon said. With the air still thick with smoke, she and other community leaders are just beginning to assess the needs of the community and determine how to help.

At the same time, some members of All Saints’ live west of Redding and had to evacuate homes still in or near the fire zone.

“Those people are still very much in harm’s way, and there are a lot of people in our congregation who cannot get back into their homes,” she said.

The threat also remains for Episcopalians living in the area of the two Mendocino Complex fires. St. John’s Episcopal Church in Lakeport is located directly east of one of those fires, which has covered more than 30,000 acres and was only 38 percent contained as of Aug. 1. Ten homes have been destroyed, and more than 12,000 structures are threatened.

Deborah Smith, senior warden at St. John’s, also works with the Red Cross and has been on the front line of the emergency response in that area.

“I … have been working as a shelter manager, first in Kelseyville and then in Lower Lake when we had to move the shelter when Kelseyville went under mandatory evacuation,” Smith told ENS in a brief written message late July 31.

Other congregation members have faced evacuations as well, including the church organist and his family, according to a Facebook post.

The other Episcopal congregation in the region, Holy Trinity Episcopal Church to the west in Ukiah, is farther away from the two Mendocino Complex fires but still affected. The Rev. John Day, priest-in-charge, reported intermittent power outages July 30 in a news release about hosting a camp next week for 50 children traumatized by the fires.

The Mendocino Complex fires, for now, are located in mostly unincorporated areas, and the Episcopal congregations nearby are smaller. The situation there is different from what people in Redding face with the Carr fire, Braak said, but the church maintains a similar focus on community outreach.

Sheldon lives in a part of Redding that did not need to evacuate, so she has spent the past week in the city checking on people by phone, email and text messages. She has visited people staying in shelters or at the homes of neighbors. There is a great need for pastoral care in a time of disaster, she said.